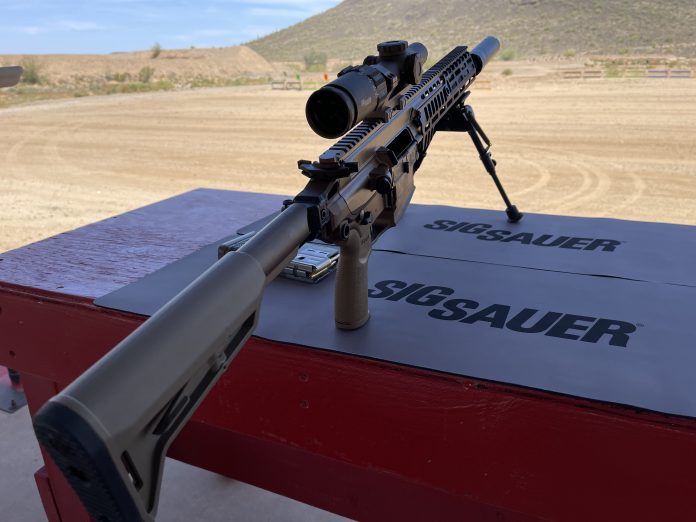 Arizona is hot. But that didn’t stop me from attending the Sig Sauer Freedom Days event that is standing in place, for the weird year of 2022, of what we would normally see at SHOT range events. It’s a standalone event. Set up like a firearms amusement carnival. And I, for one, am delighted with the format.

Sig Sauer brought out a spread. All their current offerings in rifles, handguns, a whole bay for MPX variants, one for air guns, and yes the NGSW winning XM5 and XM250 are on display.

I’ll have a seperate rundown on these later at the end of the event, haven’t shot either yet.

While not the actual XM5, it’s the slightly elder cousin. This 16″ rifle weighs in at about 8.5lbs slick, is ambidextrous and side charging, runs on the omnipresent short stroke gas piston of modern service rifles, and is extremely pleasantly gassed. The recoil with the suppressor on, Sig’s flow-thru design I believe, is about what I would expect out of a 77gr loaded M4.

The shooting experience wasn’t flawless fun and games though. I stepped up to the line, second person of the day to fire the MCX SPEAR, loaded the rifle, thumbed the selector to fire, and *click*

The primer of my first round decided working Friday’s was for chumps. The remaining rounds rang steel, all while barely disrupting my sight picture. We tried the misbehaving round again… and a third time. It wasn’t fired, it quit. Oh well.

During that first misfire though, I experienced exactly why it is very wise of SIG to keep the AR located charging handles. Yes, even though the MCX SPEAR has a well located side charger.

I am familiar with the MCX SPEAR. I know it has a side charger. I even run other rifles with side chargers. But when this new rifle went click, I didn’t grab for the foldaway side charger to clear it. Nope, I looked at the bolt to see if it was closed and grabbed for the AR charging handle. Smoothly back, out popped the lazy round of ammunition, release, immediate action complete. Fired. Rang steel.

I’m certain with a little time on the MCX SPEAR I’ll acclimate to the side charger, but my point is that handing this to AR familiar troops is going to be very easy. I’m told the recoil on the 6.8x51mm is more stout, honestly it certainly couldn’t be less stout than in the 6.5. This was smooth. It just taps you to let you know it cycled.

“But does it do anything [EXPENSIVE MODERN AUTOLOADER] doesn’t do!?”

But if you’ll be in the market for a modern, ergonomic, pleasant recoiling, autoloading rifle, this will probably be on the consideration list. If additionally you want a folding stock, ambidextrous controls (including bolt lock/release), a left side mid-receiver charging handle, an AR style charging handle, and selectable gas… then yeah, this is pretty much your gun.

It’s a little heavier than the SCAR17 but lighter than the HK417. But picking it up, with its can attached, felt like holding my 17 with its Surefire on. It will be a contender. Superfans of other platforms will continue to disparage it. Superfans of Sig will probably praise it. Rifle fans like myself will acknowledge its place as another fine functioning rifle among fine functioning rifles, I want to SBR a 13″ variant myself. Not too picky on caliber either at the moment.

The X in the XM5 is one of the main reasons why. That X stands for eXperimental, for those unfamiliar with military designations. The Army may want to change stuff on the rifle still. If they do, Sig will make the changes.

When the Army finalizes their TDP (Technical Data Package) on the XM5 and it becomes the M5, Sig will have a final parts list to look at for reciprocating onto the MCX SPEAR commercial line. Things like safeties, charging handles, gas regulator shape, sling attachment positions, all of these might be changed by the Army and then make no sense for Sig to produce those parts in bulk and then to later change them.

But when that happens, or Sig at least has enough final indication it is happening, expect to see rifles, pistols, and SBRs start rolling from Sig. Maybe, and I cannot emphasize the maybe enough, by end of year or early 2023. So much depends on the Army not changing small part designs that it isn’t certain until they are certain. As an Army small arms maintainer being one of my MOS’s, I understand their logic completely. Having giant bins of obsolete parts kinda sucks.

The other really cool thing I saw, and got to shoot a bunch because of no line, is the updates to their airgun line. They are bringing the full profile of the guns into the air gun lineup. Proper magazine dimensions and everything.

These are some of the first working prototypes of the new guns. They’re fun.

One of the larger criticisms of the airguns was their goofy deviations from the real firearm profiles. Sig is remedying those deviations and producing BB guns (.177) that will now mirror the airsoft guns and real firearms they are based upon. Still commercial 12g CO2 for operation.

Oh, and these have 3 round burst. Which is really fun to ping steel plates with.

Not much that I don’t already own to be honest. I tended to jump in lines with shorter than 6 people waiting, ate at the food trucks, talked with the partner venders like Guns.com who were out promoting. Tried an iced coffee from BRCC, which was good and is making me question my disdain for iced coffee.

It was a good first day.

The 98 degree heat and amusement park type wristbands for “rides” (shoots) didn’t keep the event from being just about perfectly busy. No lines, even the popular firearm lines, were too long. The only place that wasn’t busy was registration after about 1:00 in the afternoon. There were people everywhere without it being crowded. Tomorrow may be a different story with it being Saturday, fewer locals and not-so-locals working, and so more folks might make the trip out.

I’ll be back to shoot more.