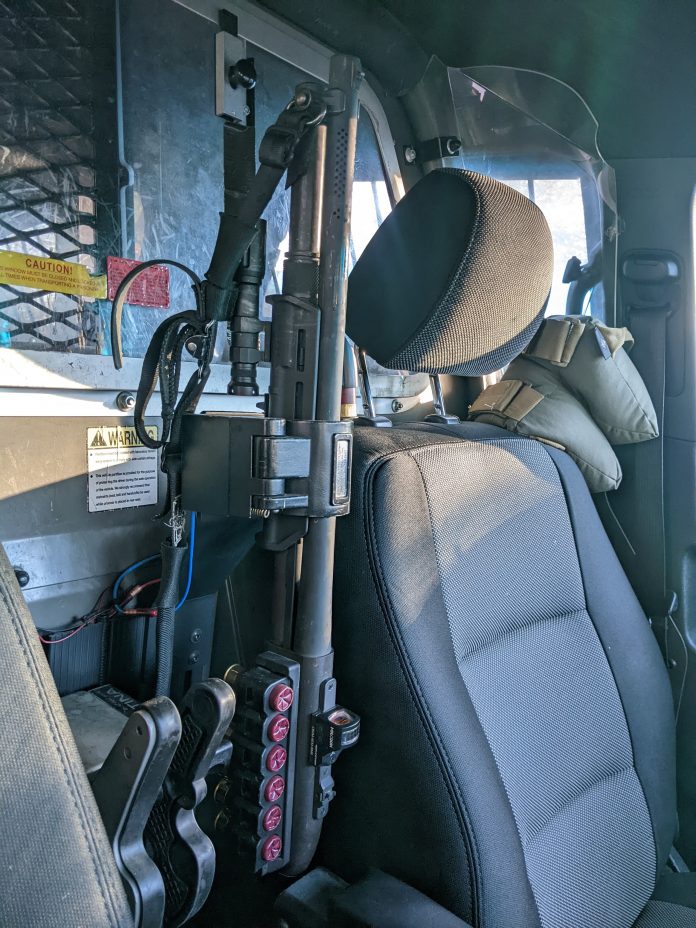 Left image: A Remington 870 pump action police shotgun sits in an officer’s shotgun rack in his cruiser. Note the Aridus side-saddle, dot, and crimson colored Federal Flite-Control hulls. It looks like this officer has probably had one or more professional shotgun training courses under his belt.

The majority of shotguns available today for self and home defense typically have some type of safety that prevents the trigger from moving back far enough to break a shot off. However, these safeties may not prevent a shotgun from discharging a chambered shotshell. If the shotgun is accidentally dropped or gets knocked around there is a chance that a chambered shell could be discharged because shotgun designs do not have drop safeties or firing pin blocks. While the chances of such accidental discharges are probably lower with more modern shotguns in good mechanical condition, the chance is never 0% either.

Shotguns are not “Drop Safe” the way handguns are.

The same reason shotguns are excellent defensive tools is also the same reason that makes them extremely dangerous if mishandled and not respected: their devastating payloads. Mitigating any accidental shotgun blast, no matter how small the chances is never a bad idea. This is why keeping a shotgun in cruiser-ready condition is a best-practice for those who rely on shotguns to defend themselves, others, or property.

“Cruiser-ready” specifically refers to a shotgun that is kept with an empty chamber but fully loaded magazine tube. In order to press a cruiser-ready shotgun into service, its action must be cycled manually. More specifically, cruiser-ready describes the actual way that police shotguns were stowed in police cars back in the day (and continue to be stowed now). Originally, this term was directly connected to pump-action shotguns, as these were and remain the most prevalent type of shotgun used for police duties. Over the years, many a misfortunate officer or deputy quickly learned what could happen to the roof or trunk of his car if he drove around with a loaded and chambered shotgun after running over potholes, rail road tracks or other nasty obstacles that go bump in the day or night. It did not take long to determine that keeping the shotgun with an empty chamber was the best way to drive around with it.

Any manually activated repeating shotgun pump-action or otherwise (at GAT, we are inclusive and have not forgotten about the Winchester Model 1887) is put into cruiser-ready by simply loading the magazine tube but not charging the action. If needed, the user must cycle the action, no matter what. There are two schools of thought regarding the storage of pump-action shotguns in the cruiser-ready condition. One camp of users prefers to leave their pump-action shotguns with the hammer “down” and the action unlocked (as if they had just fired a shot but not cycled the action). Their desire is to be able to grab the shotgun and immediately rack it. The other camp insists on keeping a shotgun cocked and locked with an empty chamber (Condition 3). They will hit the action-release lever to unlock the gun as they rack it every time. Many police officers are taught this method or personally prefer it, as an unlocked pump-action shotgun’s fore-end can move around while the shotgun is cradled in a cruiser rack and the vehicle is in motion. There is no right or wrong way, as long as you environment and equipment support it, and this boils down to personal context and specific circumstances.

Semi-auto shotguns are made cruiser-ready by loading their magazine tubes and then releasing a shell to rest on the shell carrier. To prepare for firing all one needs to do is to pull the charging handle back and let it fly. Regardless whether a semi-auto shotgun is driven by inertia or cycled by gas (or long recoil operated for that matter), there is only one way to store them in cruiser ready condition and one way to get them into action. Again, after loading the magazine tube, one must release a shell onto the carrier and make sure it stays there until its time to shoot. Most semi-automatic shotguns have cut-outs or slits on their shell carriers, so it is extremely easy to visually check for shells and make sure these shotguns are truly cruiser-ready.

Employing a cruiser-ready system for one’s shotguns also provides a generalized manual of arms for making any shotgun ready to fire. By following this practice, shotgun shooters can get into the habit of always cycling their shotgun’s actions before use and reduce any confusion or hesitation regardless of action type or model. Pick up the gun. Disengage the safety. Cycle the action. Ready. Shotguns make excellent defensive tools but handling them poorly can bring devastating consequences, so even if the probability for an accidental discharge (yes, accidental, a shotgun fired by inertia in a trunk or a vehicle rack was an accident) might be low, why not add an additional degree of safety to these awesome but also devastating tools?