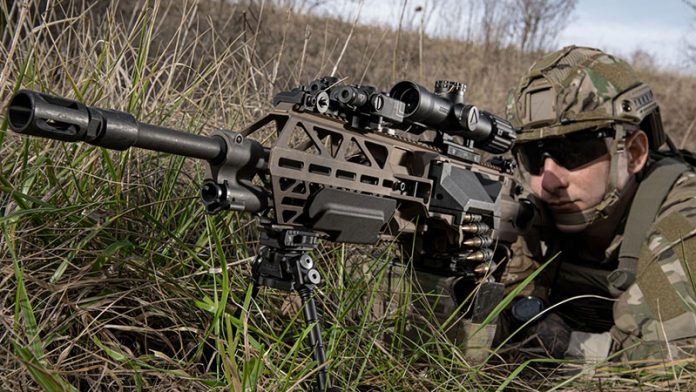 EVOLYS..Evolution..is what the Belgians (and Americans) are now going for. All around our life saving entities we are looking at getting lighter, more accurate, and more reliable machine guns put into service. The FN EVOLYS does just that. It solves the reliability problems that we see in our current machine guns and allows for weapons modifications to adhere to each individual user. All while being only 12-13 lbs depending on the caliber.

Small note before reading: There are two companies within FN. FNHerstal, out of Belgium and the mother of both companies. Then there is FNAmerica. The FN buildings and suppliers within America all fall under FNAmerica. For instance, there are FNHerstal stamped lower AR receivers and bolt gun actions. Those are usually older guns as they came straight from Belgium. Now we are seeing FNAmerica stamps. Meaning they are made in America under the FNAmerica company, not Herstal. So with new guns, they can sometimes start as FNHerstal and then we can start building them, now making them FNAmerica guns. Alright, continue on..

This is going to be more of a personally written article by myself rather than a list of specifications or quotes from the company. I’ve dealt with the M249 and M240 my whole career, still do, and have seen it at its worst and its best. With this new age of machine guns being pushed out due to military contracts it is imperative that they fix those problems and frankly..some of them just haven’t. Some of them are delivering close to the same platform but in a lighter format with some better engineering. They aren’t completely redesigning the system. However..FN nailed this one.

I’m going to start with the largest and most innovative feature IMO..

Side loading feed tray or to put it properly, the Patented Lateral Feed Mechanism.

That means that there is no feed tray on top, there is no cut to the rail space, there is no awkward getting off the stock of the gun to load or unload, there is no wiping the shells away when unloading, there is no belt of ammo getting caught up. It is all fixed.

Note: Remember on the M249, every time the feed tray cover closed it closed with a 3/8inch difference. Meaning zero shift can also happen with the optic due to being mounted on that cover.

To load the gun you can simply keep the feed tray cover closed and push the rounds in. They will catch on the very strong feed pawls and feed just fine. You can also open the cover and load them in that way until they are caught and then close the cover. Closing the cover will automatically place the rounds in place for proper feeding due to the pawls and such on the cover.

To unload, simply press the button to open the cover, tilt the gun, and your links, brass, and rounds will all fall out. Swipe for extra measure but there shouldn’t be anything stuck.

This side load feature in the fact of it being done well and giving both you the operator or your A-gunner an easy way to load and unload the gun will greatly increase the lethality of your operation.

The Gas Block is a vented block. Therefore it makes shooting suppressed on this gun a much more enjoyable and less gassy experience.

The EVOLYS at shot show was shown with FNAmerica furniture. Such as the Magpul Stock, Atlas Bipod, etc. Any other pictures you may see of the EVOLYS may feature more SCAR type furniture due to it being out of Herstal. This is a Herstal made firearm and there are only two in existence. FNAmerica simply kitted the firearm out to look as how it would when it becomes available in the United States. This shows that operators can swap furniture as they need. FNAmerica is also looking at changing the lower receiver components a bit such as adding a pistol grip that can be changed out on user level such as adding a magpul grip.

“It was unveiled in the two most widely used NATO calibres, i.e. 5.56x45mm and 7.62x51mm NATO calibres, last May, and variants in additional calibres are currently under development.”-FNHerstal

Currently a large number of DoD units have already seen this gun in action through various testing cycles. Due to there only being a small number of EVOLYS even made..this shows the reliability of the machine gun. High number of round counts yet still being successful through multiple testing cycles at different ranges. I think once a contract is signed on the dotted line with all specifics drawn out including caliber we will see more of these being in America, and even being made by FNAmerica. Until then though, sit tight, especially the civilian consumer market. This road may be a long one but it will be worth it.