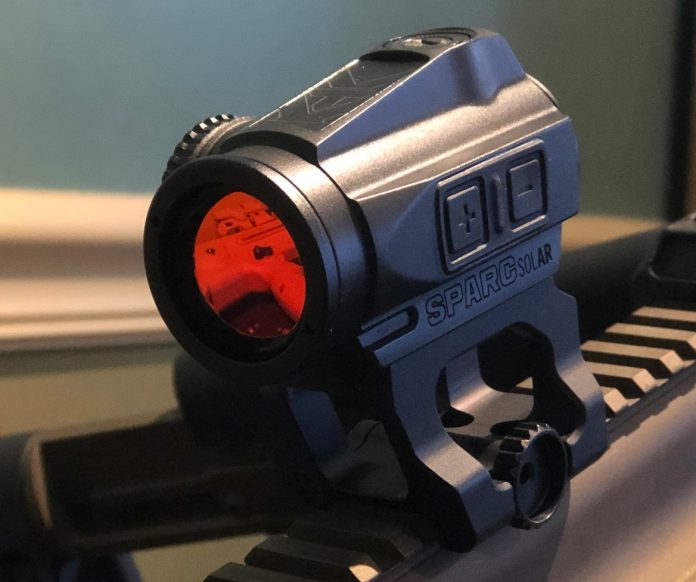 The Brand New Vortex SPARC SolAR.. Sol-ARE.. or maybe Sol-A-R. I am not entirely sure if they intended a different pronunciation than solar power or solar system but they emphasis on the platform is noted. This is a carbine dot meant to do carbine dot work.

The new Vortex is entering a crowded field, something that the original SPARC didn’t have to contend with. When the original SPARC came out, the market was just beginning to notice and acknowledge a middle ground for red dot optics at all. I’ve had the SPARC for a couple months. I received a pre-release production unit for Vortex to get my thoughts on it and now that I’ve shared my thoughts with them, I will share them with you.

So what does the SPARC Solar do that other competing sights don’t do?

But the SPARC wasn’t meant to. That wasn’t the goal with this sight.

So what was the goal?

First, let’s take a look at the “King of the Red Dot’s”

What does this dot, the Aimpoint CompM5 do?

A: It is a durable, power efficient, 2 MOA optic with manual brightness control. That’s it.

So what does the SPARC Solar do?

It is a durable, power efficient, 2 MOA optic with manual brightness control.

The SPARC Solar is supplemented by solar power for a very long battery endurance. It’s environmentally durable and not recoil sensitive. Now you can’t deep water dive with this like you could with the CompM5 but you can trip and fall in a pond or stream and it will be just fine.

We know there are varying degrees of durability to optics.

Emitter doesn’t star or blur with my astigmatism, something I am noticing from newer LED’s in good optics.

Physically, the SPARC Solar is another T1/T2 footprint dot

It can be low mounted for guns like the AK with an Ultimak tube or an MP5. It can be mounted in the 1.6-1.9″ mount height range that is popular with AR’s and it’s peer group of rifles too. I’ve got in riding on a Scalarworks ‘Lower 1/3’, but the SPARC Solar comes with mounting hardware for both a low base and “lower 1/3” mounting solution in the box. It will also support being offset on any T1/T2 pattern option.

The control surface is a horizontal pad with a +/-

The turrets are uncapped and recessed slightly. Capped turrets are an either love it or hate it feature for many, personally I don’t like misplacing turret caps. The clicks are positive and the recess should be enough to protect from most inadvertent adjustments.

The adjustments are 1 MOA, instead of the industry standard .5 MOA, we will cover more on that in a minute.

The battery cap is a knurled affair for a CR2032, which it does come with. The cap also comes featuring a nice pair of retained lens covers that can stack onto the cap itself while you are using the sight. If you, like I, prefer not to use them you can pull the caps off with their rubber retention ring from around the battery cap to store in your bag or wherever is convenient.

The SPARC Solar’s utility is in its simplicity

The SPARC Solar does not use the multi-reticle system of some of its direct competitors. It isn’t a necessary feature. It is a feature that drastically changes the battery drain rates on those sights that do use it.

Automated brightness, whether by fiber optic like the ACOG or with a sensor of some sort, has never worked out as well as we would like. Most users will opt for the manual modes, even if automatic is offered. The SPARC Solar uses the solar cell for power augmentation only.

All roughly speaking. Adjust until you group is centered at the desired distance.

Additionally, using the new US Army M16/M4 Series Zero target will give you a precise 1 Click = 1 Box of movement adjustment, at 25 meters.

This change to 1 MOA doesn’t compromise the available precision from the optic. Each click will move the dot only half the width or height of the dot, and that is when the SPARC Solar is turned down to minimum visible brightness for lighting conditions. This on a platform that will, at realistic best, be shooting a 1.5 to 4 MOA group to adjust from.

Realistically, .5 MOA adjustments are overly precise for red dot optics in the same way that .1 Mil adjustments are on LPVO non-precision platforms. They don’t increase the gun’s precision, just the number of clicks to zero it.

Trijcon’s HRS RMR (For the M17/M18) uses the same 1 MOA adjustment and it works out very well as an offset rifle optic, a very viable option for the SPARC Solar as well.

Shake Awake technology was one I was hesitant about when it first started popping up a few years ago, it seemed like a failure point for a gimmick. Now having seen, and own currently, several optics with it, and never having turned any of them off, I am convinced they have it working fine.

Speaking on the Trijicon HRS RMR again for a moment, it uses a parallel but different concept for battery endurance. Instead of shaking awake, it goes into an automated brightness sensing mode after several hours and will dim the dot as ambient light dims. This makes it power efficient in the dark while keeping the brightness around an appropriate level for lighting conditions in the environment.

Hitting the + or – on the HRS switches it to manual for specific brightness, it stays in manual for 16.5 hours after the last adjustment. It then defaults to automated again.

Both methods have merits for power conservation and battery endurance. The shake awake is more basically intuitive, it simply turns on again at the last power setting. User can then adjust for conditions. The auto-adjust function of the HRS is more ‘environmentally prepared,’ perhaps is the term, for use at a given lighting condition, but that isn’t perfect and may need to be adjusted for conditions anyway.

Neither is perfect, but I feel shake awake encourages the user to actively check their optic for conditions and make adjustments more than the automated system, which could inure complacency. I have and use both systems, I am more endeared to the shake awake.

The Vortex SPARC Solar offers the foundational frame of what we want out of a modern red dot sight. If you aren’t springing for a CompM5 and you don’t need the multi-reticle system, the Solar is very much worth your consideration.