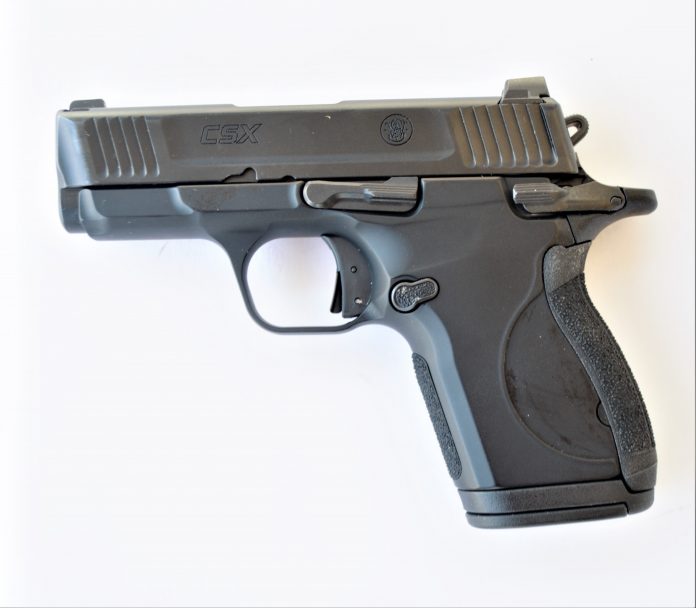 This pistol is a rule beater in the sense that it is far easier to shoot well than most handguns this size. The Smith & Wesson CSX 9mm shoots like a big gun, or close. It also packs more rounds into the magazine than most pistols this size did, while maintaining good handfit.

Smith & Wesson – affectionately called Smith by many of us – went back to the drawing board on this pistol. The CSX is a single action pistol with exposed hammer. It is similar in operation to the long defunct Star Firestar Plus.

The Firestar wasn’t a bad gun, and many of us owned one. The Firestar Plus was a high capacity single action compact. Spare magazines were practically impossible to come by. While some of the pistols were softer steel than I like, they held up well with modest use in concealed carry.

The CSX is a single action pistol featuring an aluminum alloy frame, unusual in modern production. The pistol features polymer grip inserts. There is an ambidextrous safety, ambidextrous slide lock, and a reversible magazine release. The CSX is supplied with two magazines. One is a ten round flush fit type and the other a twelve round type that is only slightly longer than the flush fit magazine. There is no real penalty in carrying the longer magazine in the pistol.

The metal parts are finished in Armonite. This finish has proven durable in many handguns and rifles. The sights are white three dot types. The sights are a good feature as they allow a good sight picture but they are snag free. The trigger is surprisingly good breaking at just over six pounds. Reset is rapid. The steel magazines are well made. I could not load the twelve round magazine past eleven rounds. Perhaps it will break in later.

A word on the safety, the safety does not lock the slide when applied. The slide may be manipulated with the safety on. This allows loading the pistol with the safety applied. The proper state of ready is hammer to the rear and safety on. There is a half cock notch to catch the hammer if you slip cocking the hammer. Never carry a single action pistol on half cock. This isn’t as strong a notch as the full cock cut out in the hammer. Only one pistol I am aware of – the Tokarev TT 33- was specifically designed for half cock carry. I never carry a High Power or 1911 hammer down. It is simply fumble prone and slow. With the CSX we have a much smaller handgun with easy leverage. I would carry cocked and locked in a proper holster. If I carry the pistol in a pocket then hammer down with this pistol is reasonable. The trigger features a blade type safety that prevents lateral discharge. While not as effective as a grip safety I like the blade type safety as an addition to the traditional thumb safety.

The pistol’s cocking serrations are easily grasped. The grip treatment is very good, allowing a good balance of abrasion and adhesion. The front strap is especially well done. The polymer inserts are a good feature. A tool is supplied to depress the plunger type lock that allows changing the grip insert. For me the supplied larger grip swell resulted in high shots at 20 yards which I corrected for when aiming. The flat insert was ideal for my average to small hands. The pistol locks up on the slide and barrel hood like most modern handguns. Take down is Browning type and simple with the slide lock punched out to allow disassembly.

When testing a pistol I know I will not keep I am miserly with ammunition these days. I test it the best I am able, and do accuracy testing to confirm reliability and general accuracy. After a few magazines I knew the CSX would find a home in my battery and I continued to test the pistol and finally sight it in with a carry load from my carefully hoarded reserve.

The pistol isn’t difficult to control with a twenty ounce weight. This is a shooter. The pistol will allow a trained shooter to keep his shots in the ten ring at seven yards if he does his part. You would not be helpless to twenty yards or more. The pistol isn’t tiring to fire. There were no failures to feed, chamber, fire or eject. Most of the loads used were the least expensive 9mm ball I could obtain. Results were good. I sighted the pistol in with the Black Hills Ammunition 115 grain EXP. At 15 yards the pistol demands a dead on hold rather than a six o’clock hold, fine for defense shooting.

I like the CSX. This is a handgun with a good balance, ideal weight for controlling the 9mm cartridge, and good practical accuracy. It isn’t for everyone. If you don’t like single action pistols this isn’t the gun for you. If you do this is an ideal hideout or daily carry 9mm.