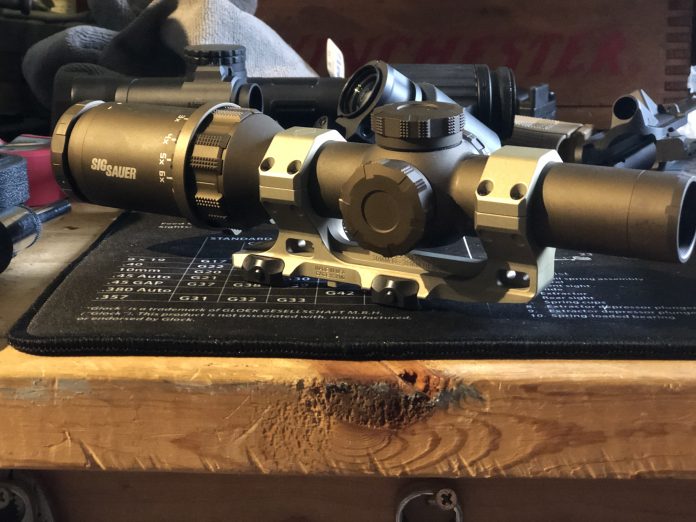 This has been, honestly, the longest and hardest review to write I have ever attempted.

I keep getting distracted and going to shoot it more. This is probably the LPVO with the most rounds underneath it I have. I’ve certainly run it on the most rifles, six if I am recalling correctly.

The Sig TANGO 6T S-VPS, the Squad-Variable Power Scope, is one of the three military awarded contract optics Sig Sauer has won in partnership with the DoD. It is also probably the least visible of the three, as it was awarded to SOCOM (primarily) to use in the same role as the Vortex Razor Gen II’s, M4A1 and MK18 Optics.

It isn’t as glamorous or forward facing as the M110A1 optics and it won’t be as widely distributed as the DVO, once that reticle gets finalized and into production.

The S-VPS is simply a solid second focal 1-6 doing its thing, and it is damn good at its thing.

I don’t think there is quite enough appreciation of how high Vortex set the bar with the Razor II’s. Matching that or exceeding it in small subtle ways to be included, accurately, as ‘just as good’ is a mark of excellence.

When people ask about getting a good 1-6, “Razor II or a Tango 6T” is a very common response. An almost unconscious response. The optic series have, very swiftly, earned its spurs as a peer optic.

I think that’s the brilliance of the S-VPS really, it didn’t try and “beat” the Razor. It wasn’t built to be a “game changer” optic that redefined buzzword bingo. It was built to be an exceptional peer optic in a small field of them.

There are several 6T models, spanning both focal planes, but the S-VPS is the SOT61233. It’s defining characteristic is the reticle. The Hellfire M855A1 is, like other military optics, optimized to run on specific rifle platforms and match the BDC to military ammunition.

You may notice that the ‘Hellfire’ options are all second focal plane, there’s a reason. The daylight bright capability that these SFP Tango6 models achieve is only doable in that focal plane. Front Focal reticles have to use a far more battery hungry and ultimately dimmer compromise that, so far, only the Razor III’s seem to have cracked the code on.

But a SFP 1-6 is a tried and true option, and for a carbine it is arguably peerless. 1-8 and 1-10 give you a larger target image at the high end, but in the employed role that doesn’t offer the user much when 1-6 will allow the user to make the shots they need and the SFP 1-6 doesn’t deny them the ability to run it quickly and easily both brightly and at low magnification.

In my personal opinion the 1-6 variable is the divider between where second focal and front focal are ‘more useful’ to the end user in the given magnification range. With 1-6 and below, second focal all the way. For 1-6 and above, front focal. This isn’t a hard divide by any means but a good rough gauge of what you can get capabilities wise. As an example that breaks the rule, EOTech’s 1-6 and 1-8. The 1-8 is SFP while the 1-6 is FFP, and I like the 1-8 a bit more.

These are the two roles, low power precision optic or reflex optic with variable magnification and by knowing which role you are using it in you can pick the focal plane you need.

The S-VPS and its other SFP brethren are notably brighter in their glass then the FFP offerings. Not just a brighter center dot reticle, but the whole sight image has noticeably better light transmission.

Does that mean you should use SFP and not FFP?

Not even a little, mission drives gear.

The reason you should (or would) be using an SFP optic like the Tango 6T with a Hellfire reticle instead of an FFP variant is that you are replacing the role of reflex sight (or ACOG) with a more capable optic that can cover down on those roles. The simplicity of the reticle and whether or not the graduation is on at every possible magnification isn’t critical, the bright quick aiming point and clear sight picture are.

Contrast that to needing precise graduation at all magnifications to let the optic perform better in the precision role and now you likely want FFP.

SFP are the variable magnification reflex sights, they allow you to do more than a dot and magnifier or a prism sight like an ACOG alone and the S-VPS excels in the role.

Instead of a Vortex?

If you’re a Vortex fan, you’re probably going to get a Razor II. No harm, no foul. It is a capable optic.

The S-VPS offers a few quality of life features I like that the Vortex lacked.

Firstly, the S-VPS had a bright sight image (in my opinion) where the Razor matched brightness with the Tango 6T’s FFP variants. Again, an unscientific observation but how I came away feeling from looking at the three and throwing rounds beneath.

Secondly, dedicated IR settings for passive aiming. Passive aiming through an LPVO is never great but this helps.

Third, quick level mark. This is just a nice addition, and was part of the contract, to get the optics into mounts and leveled quickly. It is a feature I appreciate because it does significantly speed the process.

Forth, and final, the knurled control surfaces and the smoothness of the power selector (and the inclusion of an indexed throw lever for power selector ring) are all rather pleasant user quality of life improvements.

The Hellfire M855A1 is a take it or leave it proposition. Of note, it is only ‘on’ at 6x and on top of an M4A1. So any other rifle or ammunition combination will introduce variance into the BDC. Of counter note, this is a common trait to all BDC systems.

And both of those things said, the optic itself adds a lot of flexibility to any carbine I’ve topped it with. The X95, the SCAR, the ACR, two different M4 types and a 20″ M16 type.

It simply does its job and does it damn well.