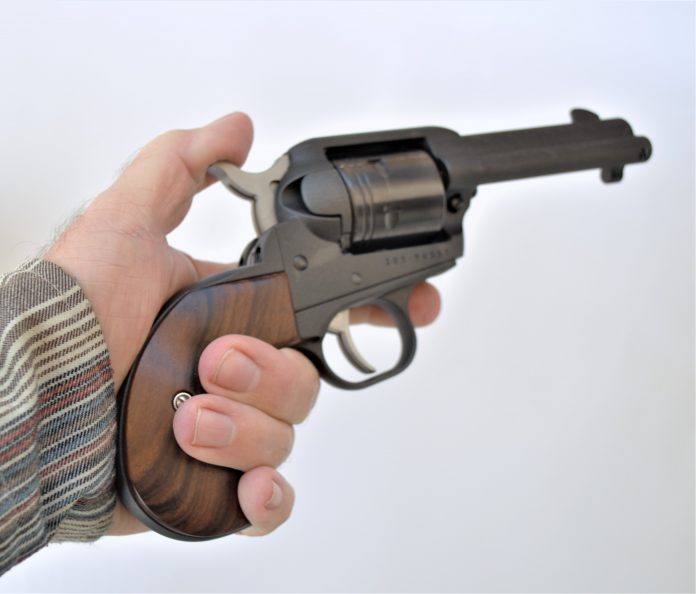 Most of us enjoy firing and using cowboy guns. This means lever action rifles, double barrel hammer type shotguns, and single action revolvers. I began firing these types back in the 1960s. I was about seven years old when I fired the Herbert Schmidt .22 revolver my father owned. The revolver handled nicely. The action wore out after a decade or so of use and the ejector rod fell off as well. It certainly wasn’t first class – or second or third class – but it worked OK for a few years.

Later I owned Colt and Ruger revolvers that worked just fine. The High Standard Double Nine wasn’t a single action but it looked like one and it too worked well. I have owned some type of .22 caliber revolver of the cowboy style most of my life. The latest is a fun revolver that won’t break the bank.

I have used several Ruger Wrangler rimfire revolvers over the years. The revolvers use inexpensive source materials. After all, the .22 develops little pressure and momentum. It doesn’t take a block of forged steel to work well in a .22 caliber revolver.

The Wrangler is a fixed revolver. If you need a long range shooter or something for firing the .22 Magnum then you really need the Ruger Single Six, which is more expensive, but worth the tariff. For casual plinking, informal targets, cowboy type single action training, and training young shooters the basics of handgun shooting, the Wrangler is a sure bet. And even more – the Wrangler will serve for small game at modest range. That is a number of chores the pistol can fill at less than three hundred dollars retail. The top of the list is fun shooting. We all need a firearm reserved for fun and this is a good one.

The Wrangler is available in a wide variety of finishes. Cerakote is durable and versatile. All Ruger Wrangler revolvers are supplied with a cold hammer forged barrel. The Wrangler features a transfer bar ignition. This means you may safely carry six cartridges in the chambers and keep a loaded cylinder under the hammer. Open the loading gate to load the revolver. Load a chamber, rotate the cylinder until you have loaded six chambers, and close the gate. To fire cock the hammer and press the trigger. The Wrangler like all Ruger single action revolvers uses a coil spring set up instead of the ancient leaf spring design. The Ruger single action revolver never seems to give trouble. The Wrangler has followed in this tradition. A new model features a birdshead grip frame. This grip frame-more or less- was originally delivered with the Colt Lightning. It is far more popular today than the Old West, but it offers a singular look. Some like it, some don’t. It comes off best in smaller revolvers with a short barrel, I feel.

My Wrangler birdshead features very nicely done wooden grips. The barrel is shorter than the standard Wrangler with a 3.75 inch length. This is a good compromise for carrying in the field. It doesn’t rob the pistol of much velocity but offers a lighter, neater revolver that isn’t difficult to simply thrust into the back pocket. The revolver is delivered with a very nice DeSantis Wild Hog holster. I found it interesting that the birdshead revolver is only ten more dollars than the standard Wrangler on the shelf. Yet the grips are wood rather than composite and the DeSantis holster is very nicely made. The holster offers ambidextrous carry, right or left hand, and may serve as a crossdraw. While I like this holster a great deal I also like the DeSantis Doc Holliday. I ordered this holster just before Christmas. It is very nicely made of quality leather. Nothing wrong with the ‘free’ holster that came with the Wrangler. The Doc Holliday will get a lot of use.

Firing the Wrangler is a joy. Remember- stay safe. Don’t cock the hammer in the holster. Wait until the revolver is well clear of your body! The hammer is easily cocked- the birdshead grip may move the hand a little closer to the hammer- and then press the trigger. As the handgun recoils grasp the hammer and cock it again. This is a fine practice piece if you shoot cowboy action. The sights are nothing to brag about. They are authentic cowboy type fixed sights. They are properly regulated for 40 grain loads. I would say that this is a ten yard sure thing for squirrel so you are good for a thirty foot tree. Rodents and reptiles at a few paces are a sure thing. As for accuracy- I think fast handling and shooting is a greater test of the firearm. Just the same the Ruger was tested for accuracy. I fired very carefully at fifteen yards. Most of the five shot groups I fired were inside of three inches. A single group when I was really on my game went into 2.2 inches. So- the handgun is accurate as the cylinder locks up tight, the barrel is good, and the trigger action is clean. The sights are nothing to brag about and perhaps my eyesight isn’t either. But I fired without shooting glasses. What it is for- fun shooting- the Wrangler Birdshead is a great revolver. It could be pushed into other chores such as Kit Gun, Camp Gun, and small game hunting. But fun shooting, that is the trick.