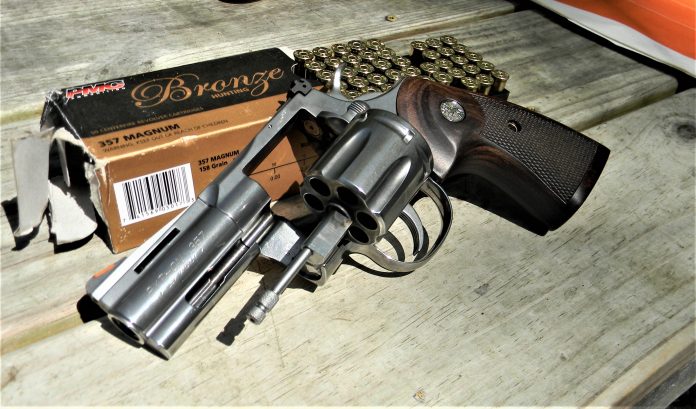 A few years ago Colt re-introduced the Colt Python. There was some resistance to the revolver as there are many fans of the original. The new gun is affordable, but certainly not cheap, and an improvement over the original in my opinion. I have owned and fired four and six inch barrel examples with excellent results and I am pleased to use them beside my original 1969 Python. The new Colt .357 Magnum Pythons are well made, nicely finished stainless steel. The grips are excellent and the revolver has been beefed up from the original. These are not collector guns but shooters made for shooters.

The original run of Colt Python revolvers included a two and one half inch barrel revolver. It is well balanced and a good shooter. The newest Python is a short barrel revolver on the same theme. This revolver features a three inch barrel. The ejector rod is longer than the two and one half inch revolver in the original line up, making for more positive ejection of spent cartridge cases. While .38 Special ammunition was usually ejected smartly with the original short barrel Python the longer Magnum cartridge cases were not as easily kicked out of the chambers.

As I said the new guns are shooters for shooters. The three inch Colt Python .357 Magnum balances well at 38 ounces. The double action trigger breaks at a smooth ten pounds. The single action press is a crisp four pounds single action break. Learn to run the trigger properly. The Colt revolver V spring powers both the hammer and trigger. If you are not used to the Colt action you may tie the gun up. This occurs when the trigger is pressed through the action cycle but the trigger is not allowed to completely reset. Simply release the action to unlock the gun. If the Colt trigger is not allowed to fully reset and the trigger is pressed hard in the locked position you may even warp the hand, the part which rotates the cylinder. So, do your dry fire with a triple checked unloaded Colt against a backstop. You will be rewarded with fine accuracy in the double action mode once you master the Colt action.

The mid size frame makes for an optimum size for handling, speed, shooting, concealed carry and handling Magnum recoil. The Colt Python features a trademark ventilated barrel rib and superb fully adjustable rear sights. The Python is fast from concealed carry and gets on target quickly. Aim and press the trigger smoothly to the rear. The Python was fired at typical combat targets from 7 to 20 yards with good results. The weight, balance, sights and trigger add up to good results.

Firing the Python is enjoyable. The .357 Magnum revolver also functions well with the shorter .38 Special cartridge. Firing the .38 Special in this revolver is pleasant. Among the loads tested was the Federal 148 grain wadcutter. This .38 breaks about 700 fps in the three inch Python.

In single action fire from a solid rest this was the single most accurate load tested with a five shot 1.5 inch 25 yard group. I also used several other loads including the Federal 125 grain JHP .357 Magnum at a sizzling 1407 fps. All Magnum loads do not live up to the promise. As an example the PMC 158 grain JSP is an ok practice load but only breaks 1050 fps in the three inch barrel .357 Magnum. Another good load, the Winchester 145 grain Silvertip, breaks over 1150 fps. The short barrel Python is a good shooter with a bit of class of and style. It isn’t for everyone and I am not certain other revolvers such as the Ruger GP100 wont do most of what the Python does. With the Python you have easily the most accurate production revolver in America.