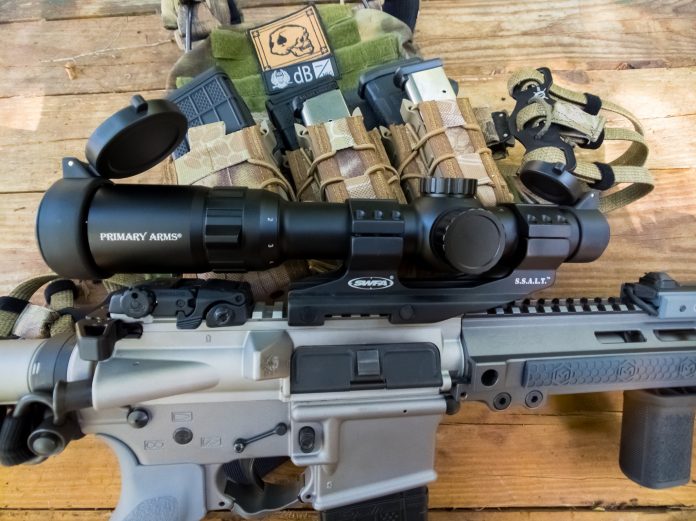 For those not wanting to read the full review, the Primary Arms 1-6x First Focal Plane with the ACSS Raptor reticle is a marvel at the price point it is being offered. I tested both the 556 and 300 Blackout variants and they both performed identically. If you have a hunting rifle or a DMR type rifle that needs an optic it should be at the very top of your list of prospects. That being said I do not recommend it for home defense for one key reason that I’ll get to later in the review.

The 1-6x scope has solid optical clarity. It’s not perfect though. If you’re unfamiliar with low variable power optics the two hallmarks of quality are edge to edge clarity and how true the 1x really is. Unfortunately, I was unable to take good down the tube photos that capture the full story.

The edge to edge clarity is equal to scopes that cost 2-3 times as much as this one. There is still some “fish eye” effect towards the edges but the majority of the optic is distortion free. The 1x is also pretty good. It’s probably closer to a 1.1x or 1.2x but still allows for easy both eyes open shooting. You may experience some eye fatigue with extended use but I doubt anyone would have an issue for a 3 Gun stage or during a hog hunt. Again, this is on par with mid to upper tier 1-6x scopes that I’ve had the chance to use.

The ACSS Raptor reticle is where the magic is here. A detailed explanation of the Raptor reticle would be an article unto itself so I will not go into great detail there. I will say that the Raptor does the best job I have seen yet for giving you useful information in a simple design. I tested the 556 scope with .223 55gr and the 300 Blackout with both 123 grain supersonic loads as well as 208 grain subsonic loads. The BDC tracked well enough to be effective in combat or hunting out to the prescribed distances. I was able to take the .223 out to 400 yards and make hits on man sized targets. The 300 Blackout, I didn’t get to shoot beyond 100 yards but worked well with the subsonic at that distance. It’s not pinpoint accurate. No one will be running PRS matches with them but it is good enough to make effective hits on practical targets. The only con with this reticle is that at 1x it can get lost against backgrounds with dark features. The illumination definitely helps keep the reticle visible.

That leads me to the biggest drawback with the scope and why I cannot recommend it for home defense, the illumination system. This seems to be where the biggest cost savings were realized. The illumination was nice and bright for me though it was pretty uneven and blotchy in the donut of death. The real deal killer for me using this as a home defense gun is the battery life. For the rifle that sits next to my bed I want to be able to grab it, safety off, and be ready to fight. Having to fiddle with an illumination selector is a no go for me. I do not think home defense is really the intended use for this optic but if the battery life was there I think it would be a completely valid use case.

Other nice features of the 1-6x FFP are the little accessories included that you would not expect on such a budget minded scope. It comes with very well-built flip up scope caps and one of the side turret covers contains a compartment for a spare battery. That was a really nice touch that makes the scope feel as though it should be priced much higher.

In conclusion, the 1-6x FFP Raptor scope is probably the highest value scope on the market right now. The first focal plane opens the ACSS reticle up to its full and substantial potential. The optical clarity and features on the scope punch far above its weight class. At a price tag of around $400 this scope has positioned itself as the go to carbine optic for the everyman.