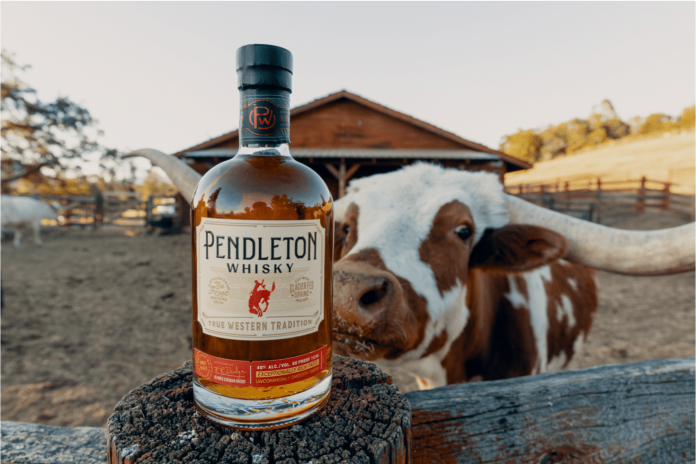 The name comes from the Pendleton Round-Up, one of the oldest and most prestigious rodeos in the West, and it’s also the official whisky of Professional Bull Riders (PBR) and Professional Rodeo Cowboys Association (PRCA). You may also recognize Pendleton from scenes at Dutton Ranch on Yellowstone.

Pendleton® Whisky is a premium whisky born in the Great American West and steeped in True Western Tradition. Over the years, the collection of whiskies has grown in popularity across the United States and Canada, reaching consumers far beyond its territory of origin with four popular expressions: Pendleton Whisky, Pendleton 1910, Pendleton Midnight and Pendleton Directors’ Reserve. Born in the iconic American Western town of Pendleton, Oregon and taking its name from one of the most revered rodeos in the world, the Pendleton Round-Up, Pendleton Whisky is a modern celebration of a century old tradition. Pendleton Whisky is crafted to achieve a premium taste and aroma profile. With precise barrel-aging in hearty American Oak and finished with the finest glacier-fed spring water from Oregon’s highest peak, Mt. Hood, Pendleton Whisky is known for its smooth, rich taste, and complex flavor that whisky enthusiasts and cowboys have come to love for years.

Pendleton Whisky can be purchased through ReserveBar, Drizly, Minibar, Bottle Haus, and at most local liquor stores across the country.