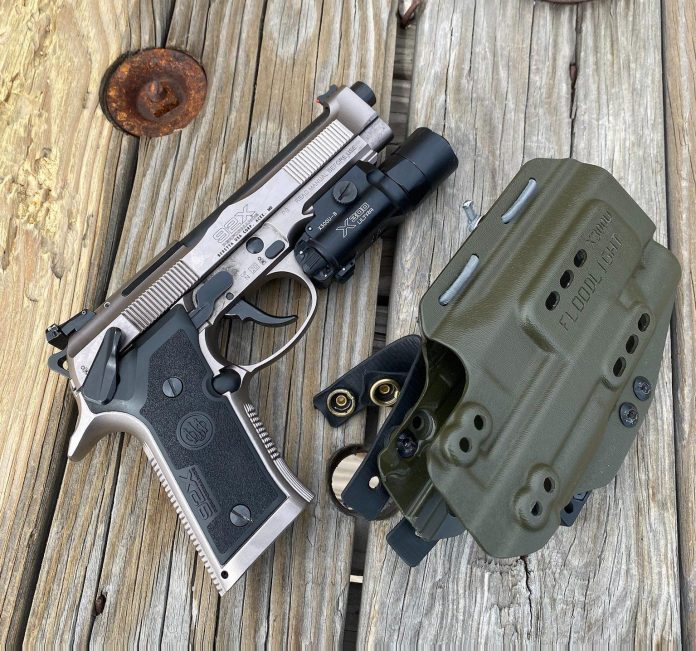 I am a left handed pistol shooter who also enjoys shooting and carrying certain firearms that happen to lack decent holster availability. It’s even more challenging as a left handed AIWB holster choices are also more constraining than right handed ones.

I’ve put a decent amount of 9mm ammo through a couple of Brigadier slide topped Beretta 92 handguns I have owned for some time now. I got my first one, a 92G-SD from the 2014 production run, within the year they became available. I used my Beretta 92G-SD to start shooting more seriously when I decided I wanted more out of life than merely turning money into noise vis-a-vis my actual shooting skills.

The problem with Brigadier slides on Beretta 92s is that they have a slightly thicker overall width since their whole purpose is having a beefier and more robust slide. (They do, at least, have with dovetails cut for front and rear sights)! Holster selection for these pistols has always been somewhat of a challenge as most Beretta 92 holsters are designed around the standard with FS/G/D/Vertec aka “normal” slide. Frankly, during this time I started carrying Glocks out of sheer practicality and the fact that holster selection is more manageable for left handed shooters.

I am aware that there are a few decent made to order Beretta 92 Brig thickness left handed AIWB holsters available. (Shoutout to JMCK)! But between the heat, humidity, and the fact that they weigh less, I have been quite happy just carrying full size 9mm Glocks. And I still do especially as I don’t want to rust up any of my nice pizza guns.

Due to past employment involving driving thousands of miles of roads and highways across the American West, where it gets pitch black and desolate after sundown, I impulse bought a Surefire X300-U 1000 lumen weapon light to take with me on the road. I also ordered the PHLster Floodlight holster as I now needed a light bearing holster and my interest was piqued when I learned these were universal. I was not sure what to expect at the time but I loved, on principle, that this holster was designed to be fully ambidextrous from the start.

The PHLster Floodlight is a fully ambidextrous universal light bearing AIWB holster; it is designed to “grab” the weapon light affixed to a pistol’s accessory rail directly. It never touches the pistol. Versions for various weapon lights such as Streamlight TLRs, Surefire X-300Us, or Modlite PL350s are available. Its construction allows it to accommodate virtually any traditionally designed handgun. I think I’ve even seen someone use a Floodlight with their USP 45 on social media.

Remember the part where I said I had a job that involved driving basically all of the Western Eleven? It wasn’t before long that the Floodlight rode with me throughout all of these trips and I really came to appreciate not only how comfortable it was (since it is a relatively large holster), but also how concealable it truly can be in spite of its size. According to my personal experience concerning appendix carry, I think this particular holster carries very flat against the body. I have worn it for hours on end to the point where it came to feel like an extension of my body.

The longest I had carried with it continuously was about 32 hours—until I was able to stop sleeping in the truck and find lodging in a hotel room in eastern Idaho. I wasn’t only driving while carrying either, as I’ve also done a decent amount of physical labor while wearing it. It will easily stay in place which is one of the biggest concerns of any good concealment holster. I was initially worried about how “loose” it felt when reholstering a pistol because I am used to very “clicky” holsters. However, between the end-user rubber spacers and the bungee cord system it has, it has never caused me issues and there is obviously enough friction acting upon the body of the weapon light. It just took some getting used to not expecting the “click.”

As with other similar holsters that utilize hardware fasteners, it is important to tighten them down and inspect all hardware for looseness or rust. I have always carried mine with the soft loops it shipped with, but many carriers like to use DCC clips or other means of connecting their belt. Because of who PHLster are as a company, if you visit their website, they provide ample documentation and instructions for their products.

Here’s the real sales pitch for the Floodlight as far as I am concerned: this holster is not only fully ambidextrous, but if you already have a compatible weapon light, that light can be your “key” to carry any pistol with an accessory rail by also saving you the money since you won’t need to buy an extra holster. Sometimes if I am out shooting with friends and I want to try their pistol, I’ll just pop the Surefire light on it and then holster it in my Floodlight. I can see what it feels like to shoot and draw that gun from the holster which is honestly pretty cool. And I won’t lie that perhaps I am enthusiastic about it to the extent I am because the Floodlight becomes even more convenient when you are left handed and enjoy shooting and carrying less mainstream handguns. I am saying this as someone who has had to adapt their wrong handedness to firearms since day one.

And back to the Beretta Brig issue I had—since I literally do everything with this holster, from EDC to going to USPSA matches (more so that AIWB and WMLs are now allowed), I just pass weapon lights and pistols around and holster up as needed. Guns like my 92-GSD, Brigadier Tactical, or 92X Performance all have accessory rails, so naturally I shoot my stages while relying on the Floodlight to get me through the match day. I understand that I will not have the competitive advantage shooting from concealment and with concealment gear as opposed to a properly set up gaming rig, but that is not the fault of the holster. In short, while carrying with it “hard”, and playing with it “hard” I have found that this truly is a modern solution to this modern problem of mine.

Since the time I purchased my holster, PHLster has also released an outside the waistband belt holster version of the Floodlight. I want to clarify that my thoughts are solely regarding the original appendix concealment Floodlight as I haven’t had a chance to try the latter.

Editor’s Note: I have the OWB Floodlight and it rocks too.

The only ‘problem’ I stumbled across was with a P320 (a very tall pistol) and using an X300U-A. The A model’s use a rear tensioner that tightens and tilts the light body against the pistol’s rail, the B models using a more normal lateral clamp to the light rail and keep the light. With the A model on the P320 the angle that I had induced to keep the light tight was too great to allow holstering/unholstering. I didn’t catch the problem at first and instead set the tension in the OWB Floodlight to almost nothing, while running the P320 decided it was escape time and I left it in the grass between two VTAC barricades. After that little problem I dug into why, discovered the angle/tensioner issue combined with the 320’s slide height/size, bought a B model X300U instead, and it’s back to working as designed.

A models will work in the OWB Floodlight on other pistols, like the above mentioned 92’s, because they have shorter slide heights. If you have a P320, get a B model.