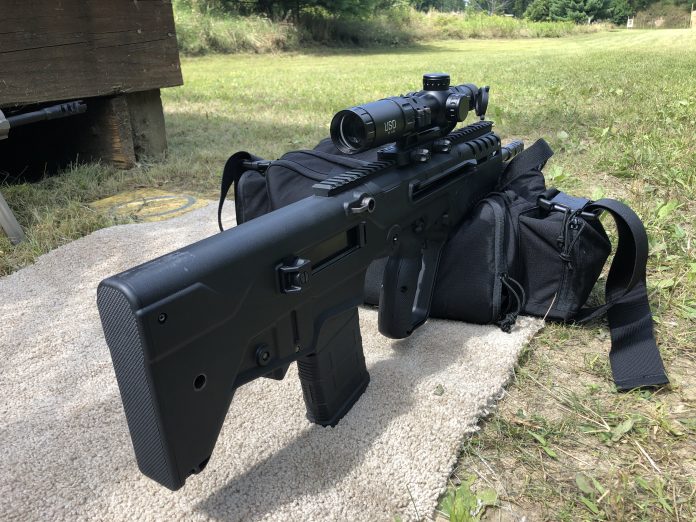 With the release of the Israeli Weapon Industries Tavor 7, their newest bullpup battle rifle, there has been an ongoing question on the rifle’s accuracy. This speculation has come from a couple of sources and was, in part, caused by of some of the perfectionists that IWI has on staff here in the U.S.

The Tavor 7 was a fully fleshed concept in IWI circles when inquiring parties made serious inroads into the prototypes for a mission profile. After those inquiries, the IWI team went back to the shop with a goal to tighten down the Tavor 7’s accuracy to a much greater degree than the original design had conceived. Comments were made about the GOAL of a 1 minute of angle gun.

Corners of the internet took this as the accuracy gospel according to IWI and when the truth emerged, they raged. This is the internet, what can you do?

[TL:DR Version – It’s accurate and will have an effective range on man sized and medium game targets out to 600 yards or so. HINT: Don’t disrespect trigger control]

Testing criteria: Comparative grouping on 3 platforms to establish standards and information on the Tavor 7 using a 3x10rd format. Ammunition is M80 Ball, Federal.

Platform 2: FN SCAR17s (Upgraded)
– The SCAR is a modern tech competitor in certain respects to the Tavor 7. Namely the barrels used in both rifles are just over 16″ with 1:12 twist rates, cold hammer forged and chrome lined.

Course of fire: From prone, supported, fire a 10rd group into the designated box. Switch weapons after each group to allow some cooling and not ‘dial in’ or fatigue on one platform. 3 groups were fired from each rifle total. Rifles had been fired and effective zero’s confirmed prior to the test.

Optics: Each rifle was wearing a different class of optic but all were shot at 4x to match the SCAR’s TA31 ECOS.

Stabilizers: Both the M110 and SCAR were fired from bipods. The Tavor 7 was braced on a bag.

All 9 groups plus a quick string of 3 headshots I did to confirm zero. The results tell the tale of the Tavor 7 and the accuracy finally achieved out of the box without sacrificing the rifle’s function (Note: It is known that the T7 hates TULA due to the crap consistency of primer depth and hardness)

The individual strings of fire varied as I switched off weapons. M110.. SCAR17.. Tavor 7.. Repeat next line down.

Pictured here, the middle sting of fire, is probably the most illustrative. It felt the best on all platforms and the groupings reflect that. I was fully warmed up to shooting all 3 and not fatiguing yet. Shooter fatigue is real, anyone who has shot a slow repetitive test like this will understand. It’s one of the reasons you don’t spend a long time chasing a rifle zero.

Conclusions based on results:

The Tavor 7 grouped the worst of the 3 rifles, yes. The T7 is not going to win your PRS match. Not it’s job and not its design.

But it didn’t lose by much nor was “winning” the shoot off the point of the test. The reason for the test was to gather shareable data so that an average of comparative performance can be established. I didn’t expect a $2,099 7.62x51mm stock bullpup carbine to beat $6,000 and $10,000 dollar systems, one of which was built from the ground up as a precision rifle.

The largest contributing factor to this accuracy, in my opinion, is the trigger. Once aftermarket 2-Stage triggers for the T7 become a reality we can see the accuracy gap close further. It’s never going to beat the M110 or SCAR, those rifles both have mechanical advantages that lend accuracy the Tavor can’t match as a bullpup and in how the system itself is put together and serviced.

Another illustration I included, the barrel/sight offset of the Tavor 7. Shots were at 10 yards with a zero for 50, done quickly while standing. (Yes, I like to pull shots left while shooting quickly. Thomas can roll his eyes at me later when I see him at the next Tavor Operator course.)

[Go take the Tavor Operator course series by the way, all of you, best $$$ you can spend in this industry and I have spent a lot of money figuring that out.]

The T7’s trigger feels like an old roller delayed H&K trigger, like the G3 and MP5, it’s a trigger you have to ‘roll through’. The trigger on both the other rifles in the test are 2-Stage triggers meant for very predictable and accurate breaks, something infinitely easier to accomplish in a standard trigger group without a long transfer bar. While the Tavor 7 trigger is good, the best of any bullpup I’ve shot stock, it isn’t a Geissele or Knight’s 2-Stage and when shooting for pure accuracy trigger break does matter. Minimizing sympathetic motion transfer to the gun is easier when the trigger is helping you out.

The 7 is a practically accurate rifle that can take advantage of the effective range on a .308. Rumors of its inaccuracy are exaggerated. Kind of a strange reversal of the M14‘s legendary status actually.

It will work well as a battle rifle, especially in any environmental parameter where being compact gets you those mobility bonus points, precisely as intended.

Remember to keep it fed once you find one too.

Widener’s is the place to do it.