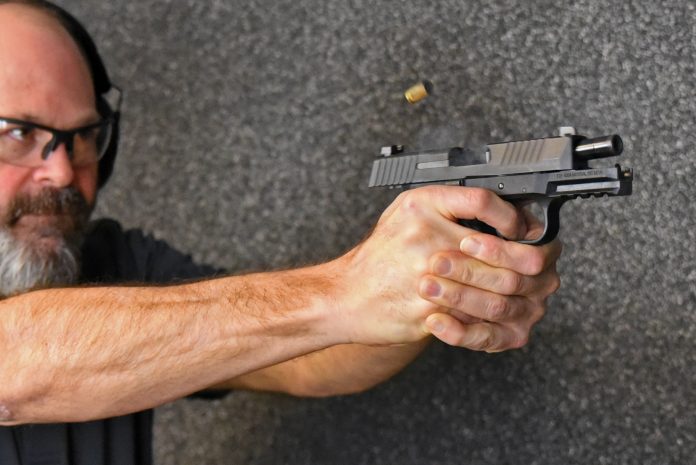 Polymer midsize carry pistols are exploding onto the market since Glock took over that seat at the top with the G19. I have never been a huge Glock guy. However, I have always been a fan of the small frame carry guns.

I always just accepted that I would carry less rounds while being able to conceal easily. The Glock 19 never felt that great to me at the range and it just didn’t seem worth losing the comfort and ease of concealing a small frame pistol for something larger and not that impressive in my opinion. With that being said, when FN released the new 509 Midsize and I got the chance to handle it at SHOT Show and felt like it was time to revisit the midsize market.

The new FN 509 Midsize is pretty much identical to the original FN 509 with the exception of the 15-round capacity, some smaller parts, and a shortened frame. I immediately was impressed with the overall look and feel of the 509 Mid. The FN 509 mid really looks identical to the original model but feels much better in the hands. The shorter frame, 15-round magazines, and a new slide stop definitely add to the appeal of this package. The original 509 was difficult to conceal with the longer frame. However, the Midsize, although only a touch shorter, makes a world of difference when it comes to concealability. The FN 509 Midsize is right on par with the Glock 19’s frame size. Parts are actually interchangeable from the full size 509 to the midsize 509.

The new 509 Mid has a few improvements over it’s bigger brother. The reshaped grid around the mag button means that the FN was able to use the standard 509 mag release with none of the old issues that the original 509 had.

FN also utilized the reduced power spring that is included with the 509 Tactical model. This makes the pistol much easier to rack the slide, making the midsize much more user friendly. The magazine from the original 509 and the new 509 midsize may look identical. However, the new magazine utilizes a redesigned baseplate, shorter mag spring length, and the overall length of the magazine body has been shortened to match the shorter grip.

The 509 boasts some of the best slide serrations on the market in terms of feel and overall look. They grip very well while not being too aggressive. With the use of those serrations and the tactical model’s spring you have a pistol that any shooter can handle with ease.  The slide takes minimal strength to rack back and all hands that handled the pistol during my time testing it loved that about it.

One feature I really liked was that the 509 Tactical barrel actually fits into the Midsize without issue since the slides share the same internal specs.  If you are someone who wants to throw a can or compensator on the 509 a simple barrel swap will make it easily possible. No aftermarket barrels are needed.

Like all 509 models the Midsize backstrap can be swapped out giving options for the individual shooters grip. Unfortunately, to change out the backstrap you need a small punch.  It would be nice for FN to make changing the strap a bit easier and at least provide a tool to use if you want to change it.

One reason I am not a fan of the G19 is because of the thick bulky grip. Using the flat backstrap panel I retained a thinner feeling grip.  Glock guys don’t worry though, you do have the option of a curved panel that makes the grip a little larger to give you that Glock like feel.

Shooting Its Way to The Top

My first trip to the range I was a little skeptical of the pistol’s abilities.  The trigger had a little bit of a gritty feel to it at first and I was not a fan of how tall and bulky the sights looked. I loaded up 2 full magazines and decided to jump right into it. The first 15 rounds struck the paper at a distance of 7 yards. When the smoke cleared, I was shooting consistently low and a little left. It was a great grouping though at less than 1 inch. I’m positive that this was due to shooter error because of the sights. I am used to Sig style sights and the FN has a little bit different sight picture.

Once I adjusted for the sight picture on the second magazine and produced the same grouping but dead center on paper. Time to really test the 509 out. That first outing to the range I burnt through 250 rounds in less than 30 minutes. That gritty trigger smoothed out after the first 100 rounds or so also.  The gun was just so well balanced, performed incredibly well, and ate anything I fed it.  Hornady Critical Defense, Sig Sauer V-Crown Elite Performance, The Hunting Shack FMJ, Aguila FMJ, and my new personal defense favorites; Barnes Tac-X PD Defense rounds.

With over 1,000 rounds down range with the 509 Midsize I experienced not a single malfunction. The 10-yard groups were very impressive, the best group at this distance was around 1.25 inches and was shot with the Barnes Tac-X PD Defense rounds.

I happened to go out and do some indoor shooting during the testing of another firearm at a 50 yard range. The FN 509 Midsize happened to be on my hip.  I decided to see what this gun would do at 50 yards just for the hell of it. I was able to put 30 out of 30 rounds of Aguila 124 grain full metal jacket on target at 50 yards. For a midsize pistol I was very impressed with these results.

Having never been the biggest fan of midsize polymer pistols I was skeptical about the new FN. This skepticism changed quickly once I ran this gun through the ringer. To say I was impressed with the FN 509 Midsize would be an understatement, I was absolutely blown away. So blown away, this gun has joined my personal carry arsenal now.

Just a flat-out great shooter that is easy and comfortable to carry and perfect for all skill level shooters to operate. In my opinion this is a pistol far superior to the Glock’s most people normally look towards in this category of pistol. The FN 509 Midsize is currently available at FN dealers and carries an MSRP right on par with its competition at $649.00.  Overall, it shoots better, looks better, and has better features than the Glock platform. I would highly recomend getting your hands on one to carry everyday.