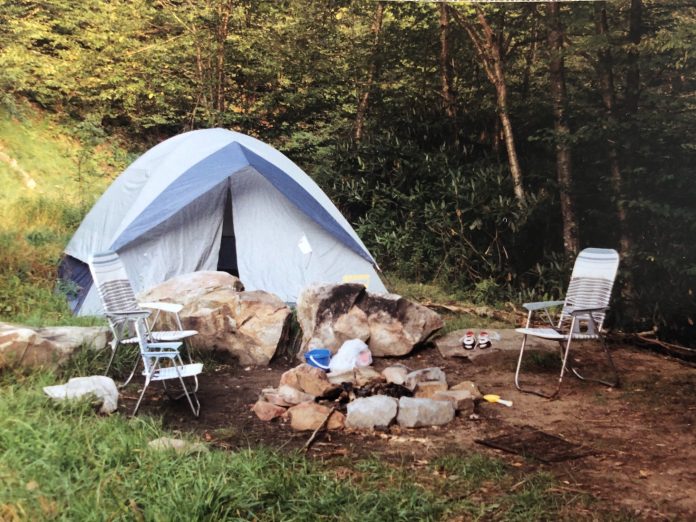 What follows is a reworking of a personal blog post I made back in 2013. Probably only ten people ever read it. I was just getting started at the time and was mostly writing for my own satisfaction. But now on a re-read I think some young mothers of today could use some reassurance that there is always someone who is doing a worse job than you at keeping it all together with children in the outdoors — namely me.

For context, I was referring to an article I had just read by Julie Golob, a woman who I greatly admire, and who I’m sure is a much better mother and outdoorswoman than I ever was. Her article about taking her two small (at the time) children along on an Elk hunt caused me to reminisce about my own struggles with children in the outdoors back in the mid-to-late 1990’s.

I just recently read a post from Julie Golob about taking her two small children on an Elk hunting trip, and it brought back all kinds of (albeit hazy) memories of my own child-rearing. Preschoolers/infants on an Elk hunt? Seriously? More power to Julie, but holy cow, I must be a slacker mom. There is no way on gawd’s green earth that I’d have been able to manage that when my children were small.

That’s not to say that my then-husband and I didn’t attempt small camping trips with our brood of three, but I mostly remember trying to keep a toddler from falling into the fire, and preventing another child from poking his sister’s eye out with a stick. There may have been some dirt-eating in there somewhere too, it’s a little hazy. But Elk hunting? Not so much.

There wasn’t any healthy food or organically balanced diets for my children on these trips. (Well, dirt is organic, isn’t it?) We were on a single-income grad school budget at the time, so in addition to eating dirt, there were whatever hot dogs I could find for less than a dollar a pack. What’s a few preservatives and pig testicles amongst family, right? Hotdogs did involve sharp sticks though … and fire… so that was about all the adventure I could handle with three children. I was a slacker mom and I freely admit it.

Eggs for breakfast over the campfire? Umm… no, here have a pop-tart. Mommy needs some coffee and we need to heat water, so Daddy’s gonna light the picnic table on fire with his backpacker stove if you want to watch.

There was also not much “sleeping” going on in those sleeping bags. Listen, there’s a reason that the whole “family bed” trend never took off in our family. Two large people and three small people all sleeping together in the same tent is not my idea of a peaceful night’s rest.

As most people know, toddlers sleep “clock-wise” (or sometimes counter-clockwise, depending upon their orientation to the earth’s magnetic field). Which means that even if everyone goes to sleep in a  straight row, someone is going to wake up with a small person’s pee-diaper in their face.

Which brings me to the whole camping/potty conundrum. Julie mentioned the Luggable Loo, which absolutely must be a gift from the potty-gods to camping mothers. But that wasn’t even on the radar in my day. My then-husband had a penchant for camping in the national forest, which meant of course no facilities. This was a fine arrangement for dad and son, but mother and daughters had some challenges to overcome.

Fortunately, I had been able to pick up some skill in that arena over the years and was able to pass some of that on to the girls. But “teaching” the skills required to pee-while-female in the weeds takes time and practice. I don’t think peeing into your own socks is a thing that men and boys generally worry about. But if you’re planning on camping rough with young daughters – pack extra socks.

If as a pre-schooler, you “fall into” the potty at home you might get a little wet, but you’re not actually going to go anywhere. But the yawning abyss of that national park potty? Holy Mother of Macaroni! Why in the world would your child “want” to put her bare bum up there and expose it to the ravening jaws of gawd-knows-what just waiting down there to grab her? The end result is a whole family of constipated children with bellyaches by the time you get home.

Then, there are the other problems that are not sticks and campfires and constipation – namely wildlife that are NOT elk. My other camping memories are hazy, but this one stands out in its stark clarity – mostly because of my terror.

We were packing up the truck after an overnight (or maybe two nights?) at a campground in a national recreation area. My toddler daughter was — well– “toddling” along with me as we carried gear from the tenting field, through the wooded path back to the truck. We dumped off the stuff and headed back for another load, and said toddler got gradually about 10-15 yards ahead of me on the trail, waving her ga-ga as she went (ga-ga is what she called the former cloth diaper/spit cloth that served as her comfort item).

As I glanced down the path, I noticed that there was a big tree limb across the the trail that had not been there on our trip out a few minutes previously. Then the “limb” moved! And in that heart-stopping moment I realized that my BABY was closer to it, than she was to me! Heart in my throat, I yelled to her and reached out my arms, but I knew I would not reach her before she reached the snake.

Perhaps it was the potty-gods who intervened and wafted the scent of her diaper to that creature or perhaps it was the waving of the ga-ga that sent the reptile on its way, but it began to move off the trail and into the woods before my daughter got to the spot it had occupied. I grabbed her and swept her up in my arms and it took about 10 minutes to make my heart rate go back to normal.

Now, my rational logical mind knows that this was probably only a big black rat snake that was completely harmless to anything but field mice. A “Real Outdoorsmom (TM)” would have taken the opportunity to instruct the toddler in the finer points of snake habitat and species identification, but I was a slacker, and my “Mother Eve” instincts would have none of that. There was “SNAKE-kind” near my baby, and I was not okay with that. Besides, I don’t speak parseltongue – I’m really more of a Hufflepuff kinda gal.

Thankfully that was the only true bad experience I’ve had while camping with small children. Or maybe I just don’t remember much else through the haze of exhaustion and sleeping with clock-wise toddlers. But the point is that this is “all” we were doing – camping. I cannot imagine also packing hunting gear along with the diapers and spit cloths and nursing pads, and pop-tarts, AND trying to keep the diaper-smell from permeating my scent-blocking camo. Kudos to Julie though for finding some mommy-time in the great outdoors. She is my new hero.

Despite being a slacker mom for all these years, I’m trying to make up for it now. I just recently took my 21-year old daughter to Babes With Bullets camp, and will be taking my 17 year old daughter shortly. But they can at least wipe their own noses and carry their own pop-tarts now. And thankfully, nobody’s afraid of the potty anymore.