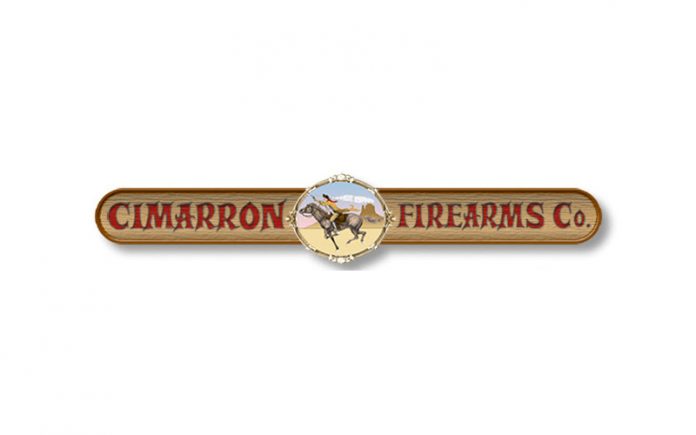 The Cavalry’s guns are coming to Cimarron. Recognized as the leader the leader in innovation for old west firearms reproductions through quality and authenticity, Cimarron has worked continuously to perfect the authentic detail, fit, finish and function of their line of frontier firearms.

The first troops to receive Colt’s new 1873 army revolver in the latter portion of that same year, included Custer’s famed 7th Cavalry. It was these early issue pistols, inspected by Orville W. Ainsworth and shipped to Fort Lincoln, that Lt. Col. George Armstrong Custer’s cavalry desperately fought with as they made their last stand on June 25th, 1876, at the disastrous Battle of the Little Big Horn, known to the Indians as the Fight at the Greasy Grass.

Cimarron’s 7th Cavalry model in .45 Colt, is another great historical reproduction inspired by an original in our antique collection. It’s a detail-perfect rendition of the single action of Custer’s ill-fated 7th Cavalry’s, legendary revolver. Each authentic 7 1/2-inch barreled, firearm is properly stamped with Ainsworth’s OWA cartouche on the walnut stock, government proof marks and the inspector’s initials are found in all of the appropriate locations and the last 4 numbers of the serial numbering is on the cylinder, as well as on the color case hardened frame, trigger guard and blued butt strap. The proper 2-line patent dates and the U.S. stamping is also found on the left side of the frame, as with genuine “Custer era” cavalry revolvers. This model is limited to just 2,000 units of each of Custer’s five companies C,E,F,I and L, that perished under his command at the Little Big Horn. Available in Standard Blue, Charcoal Blue or Original Finish. Holding Cimarron’s 7th Cavalry model is like holding history in your hand!

The army of the frontier often found that American Indian scouts were a necessity in locating hostile bands, thus many units throughout the Western territories employed them. To aid in keeping their revolvers in working order, nickel plated firearms, which better resisted the corrosive effects of black powder, were issued to Indian scouts. With the exception of being nickel plated, these 1873 models were identical to those pistols issued to the troopers, including the government inspector’s cartouche and other markings, U.S. stamping on the frame and walnut stocks. In the hands of these able trackers, the nickeled scout revolvers proved to be effective sidearms.

Cimarron’s U.S. Cavalry Scout Model is an authentic copy of the 1873 single-action revolvers issued to these brave warriors in blue, reproduced directly from one of our antique collection’s original firearms. Like the troopers’ 7th Cavalry Model, this 7 1/2-inch barreled, .45 Colt caliber, full nickel-plated peacemaker-styled sixgun bears the OWA cartouche of 1870s military inspector Orville W. Ainsworth on the walnut grip. Other government proof and inspector’s markings are stamped in the proper locations, as well as the 2-line patent dates, the U.S. stamp on the frame, and uses blued screws and cylinder base pin. 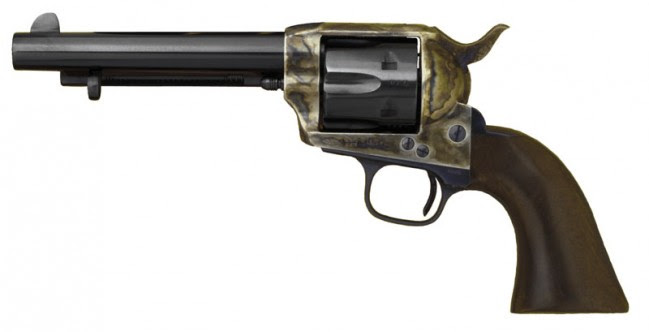 In the early 1890s the U.S. Army began issuing double-action revolvers in .38 Colt caliber, and was retiring the 1873 single actions. However, because of the underperformance of the somewhat anemic .38 Colt loading during the Spanish American War of 1898 and the Philippines Insurrection, many officers and men clamored for the return of the older, more powerful .45s. The older single-actions were in need of refurbishing, so they were returned to the factory and to Springfield Arsenal where the work was accomplished, including cutting the barrels from 7 1/2 inches to 5 1/2 inches. Because many were issued to artillery batteries, modern-day collectors have coined the term “Artillery Models” to these reissue arms.

In 1898, the First Volunteer Cavalry, a colorful unit of cowboys and other adventurous young men was formed, with veteran Indian fighter Col. Leonard Wood in command and Lt. Col. Theodore Roosevelt second in command. Recruited in a San Antonio bar and trained at Camp Wood in Texas in 1898, “Teddy” Roosevelt’s “Rough Riders” would carry over 100 of these Artillery models when they bravely charged up San Juan Hill in Cuba.

Here’s another great historical reproduction inspired by an original in Cimarron’s antique collection. Available in Standard Blue or Original Finish, our detail-perfect Artillery Model bears the government inspector Rinaldo A. Carr’s cartouche and all martial markings, including the U.S. stamped frame, just like those reissued guns that went on to see service into the early years of the 20th century.

Our new catalog is here! 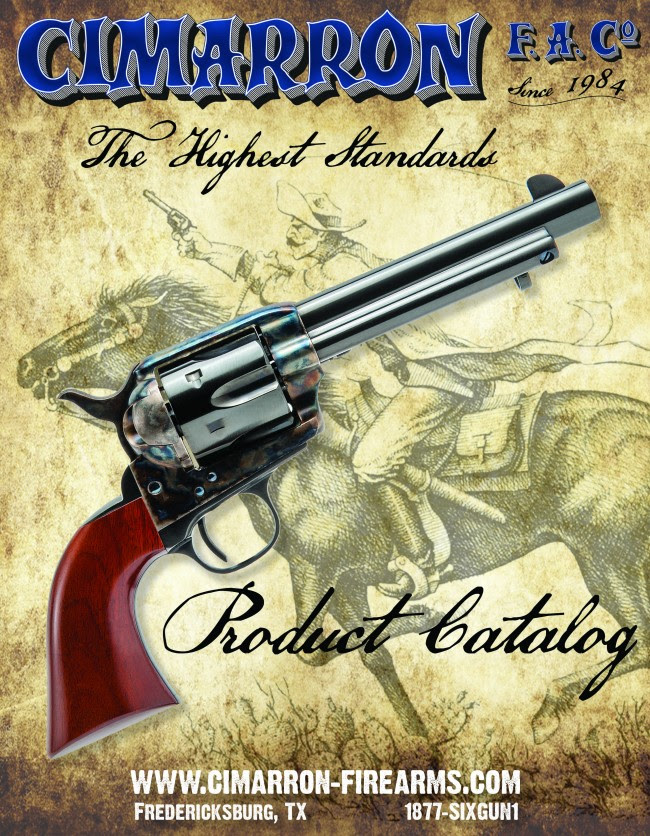