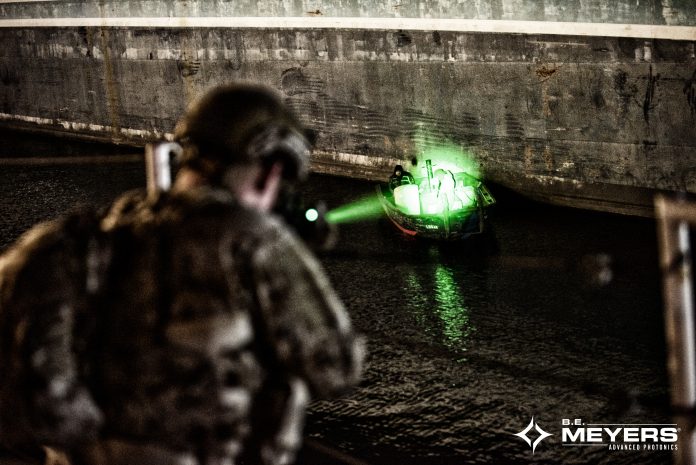 As the media has shifted away from the riots and public disturbances those in blue are still very much involved. Crowds are continuing to use illegal lasers against officers. To counter that, LE agencies are now employing the B.E. Meyers & Company GLARE RECOIL and GLARE HELIOS.

History repeats itself does it not? In the late 1970’s during the civil unrest in Berlin the tactic “Black Bloc” took the stage. This is a method of a large group of protesters dressing in all black with black masks to ensure that no individual identification can be made. Here we are in 2020. Aggressors are burning precincts, beating people, and shining illegal lasers into officers eyes.

and again..history repeats itself. Hong Kong in 2019..

So how do we counter the tactic of ‘Black Bloc’ and identify those aggressors? The B.E. Meyers GLARE RECOIL and GLARE HELIOS. A video going around the web shows an officer employing the GLARE HELIOS from a rooftop. The officer shines the laser from above directly onto the agitator. This will show officers on the ground who to pay attention to and detain. If the individual is not detained and chooses to leave, that officer can still use the HELIOS to identify the individual no matter the distance ensuring that person is detained.

Immediate stop to those Injuring Officers

A large issue that is still ongoing is officers being injured by facilitators shining illegal lasers directly into officers eyes. This can cause temporary and permanent damage. BE Meyers equipment is being used to counter that. Targeting the facilitators with the Glare Helios takes their attention away from the officers on the ground and towards the officer on the roof. It also immediately stops an agitator from shining officers on the line when shined directly at that individual. A Seattle PD officer, a department that has been using the BE Meyers equipment since 2016, recounted a situation of similarity. The officer, who won’t be named, stated that a woman using a strobe light against officers was targeted with the GLARE HELIOS and immediately stopped harassing the officers. She then walked off the line and did not return.  Several other rioters with high power red, green, and blue lasers targeted officers on the line as well as the officer on the roof.

These individuals were engaged with the GLARE HELIOS and either immediately left the area with some being arrested on their way out and/or were shielded by the other protesters with umbrellas. The SPD officer stated that the protesters tried to continue engaging the officers but were virtually ineffective due to the HELIOS. The HELIOS acts, in layman’s terms, as a large green sun. Using the GLARE beam envelops the entire indivudual and does not allow them to aim their lasers. If the agitator continues to engage the officer while leaving the HELIOS will continue to be used no matter the distance eventually causing that agitator to again leave or be detained.

Facilitators have also been seen shining illegal lasers and lights into cameras around federal buildings. This is another reason that these facilitators need to be identified and stopped.

Below is a video of Antifa protestors shining lights into the faces of a small group of people trying to walk away from the mob.

How do the GLARE HELIOS and GLARE RECOIL work?

The Patented SmartRange Safety Control is what makes this equipment a safe and effective way to counter the aggressive laser activity towards officers.

An important thing to bring up in relation to this topic is that these facilitators and aggressors are being charged for their crimes days and weeks later if not arrested at the scene. Our Agencies are showing that these crimes will not be tolerated. Whether it is looting, arson, or injuring officers, these criminals will be held to the law through thorough investigation.

Revision Military has been providing officers eye protection during these violent protests to ensure that officers can protect themselves from the illegal and dangerous laser activity. The Revision FT-2 in StingerHawk frames are the recommended eye protection due to protecting the officers eyes while still allowing them to use their red or green emitting equipment without any viewing obstruction.

Peaceful protests eh? If counter measures are being used there is a reason and that reason isn’t that these protests are peaceful, but I digress..
When standard and safe equipment is taken from our officers a method needs to be used to continue the job and that can be the BE Meyers GLARE HELIOS and GLARE RECOIL. Departments that thought these were of no use to them are finding themselves in situations where they are now in NEED.

The B.E. Meyers devices have been used for many years by various Mil and LE agencies. However, with the civil unrest and violent protests that many cities are facing for the first time there is a revitalized need for such equipment. More agencies are reaching out to purchase this equipment, both for the protection of their city and safety of their officers.

A personalized thanks from myself and many others go out to BE Meyers specifically for the quick and honest actions during the riots of 2020. Lasers were handed out on the streets to officers that ordered them and well…really couldn’t wait for shipping.