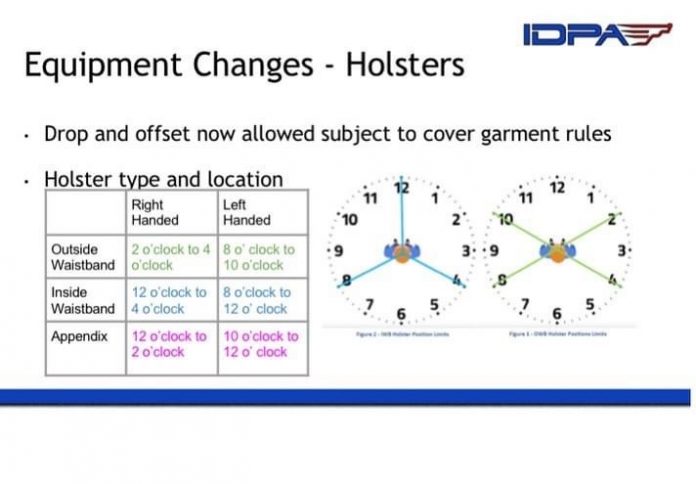 The International Defensive Pistol Association (IDPA) is the governing body of a shooting sport that simulates self-defense scenarios and real life encounters. It was founded in 1996 as a response to the desires of shooters worldwide. The organization now boasts membership of more than 25,000, including members in 70 foreign countries.

And they have just added one of the most sought after changes into their competitive ruleset, appendix carry.

Appendix carry, often abbreviated AIWB (Appendix Inside the Waistband), is a popular carry method advocated by many knowledgeable trainers and shooters within the defensive shooting sphere. But IDPA was for a very long time resistant to the practice due to a perceived lack of safety in the method.

“You’ll shoot your junk off.”

This was the popular chorus of the untried masses who had never ventured to try the method. Those of us who have and just find it the lesser of the two in comfort acknowledge that it is arguably the fastest method and most secure on the body for the firearm. It does require careful holstering, as does all holstering though so that isn’t a new concept. We’ve just grown used to OWB secure retention holsters-type being deemed safe.

Several other updates were integrated into the ruleset, including some capacity updates and a PCC10 as an optional subdivision of PCC. What this means is that IDPA is closing back on their initial mission, of being a game that emphasized more concealed carry oriented and home defense oriented shooting styles still in a competitive environment.

It was strange that they disallowed several of the popular and well vetted systems for awhile.

What does this change?

Not much overall, it gives matches a little more flexibility to allow competitors to play the game. People wanting to run their AIWB carry gun are no longer required to run a different rig to shoot with it in competition, forcing themselves to practice a different draw. PCC shooters can also run PCC10 which can force reloads and manipulations or be restrictive state friendly as applicable.

It’s always a positive when you see these sports evolve with their members. IDPA is helping advance the discipline with this move and give shooters an avenue to improve.