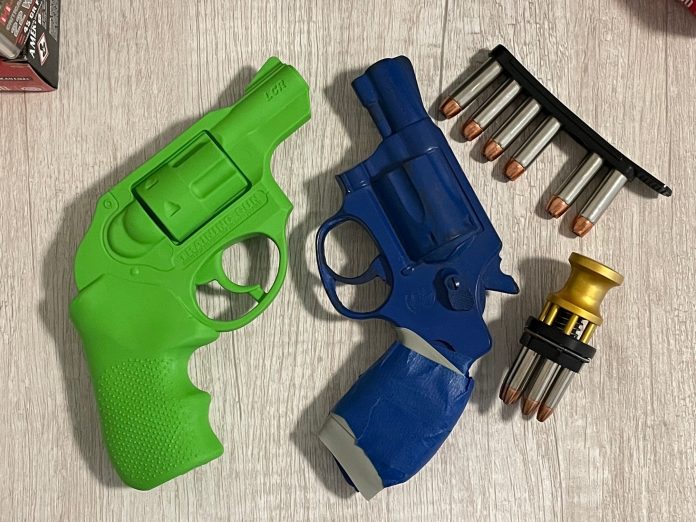 Alright, you’ve gone through your risk/reward calculation and decided that you want to carry a reload for your CCW revolver. We have some options for how we can accomplish this, so in this post, part 2, we look at ways to accomplish this and some pros and cons of each method.

There are more than three ways to carry extra ammo/reload for a small revolver. We’re going to examine the three most common, which are: 1) Speed strips, 2) a speedloader, and 3) the New York Reload. Some other options are carrying loose rounds in a pocket a few rounds in a cartridge pouch, but we’re excluding those because they’re not in common use with the average small revolver owner. Based on my research, speed strips, speedloaders and the New York Reload are the most common answers when someone asks what’s a good way to carry a reload for their small gun.

Alright, let’s start with what I think is the best option: Speed strips. As an interesting aside, this sort of product is made by several different companies, and only one of them (the ones made by Bianchi) are actually called Speed Strips. But the name is so common it’s like “Kleenex” or “Band-Aid.” In the picture is a 7 shot Tuff Products Quick Strip, which is what I use to carry a reload for my 3 inch Ruger GP100. This is my go to choice for carrying a revolver reload, specifically because I am not carrying a reload for my six (or five or 7 or whatever) shooter if I think I’m going to get into a running gun battle, but rather because I want to have some rounds handy to administratively top off if I do need to use my gun. The Tuff Products Quick Strip lays flat in my pocket, is light, and keeps all the rounds in the same spot, so I never have to fish around for loose rounds.

This is a SpeedBeez speedloader for the S&W 351PD in 22 Magnum. These loaders are among the fastest options for reloading a concealed carry revolver, but have one big disadvantage. Even the smallest ones are difficult to conceal, regardless of make or model. The big advantage to a speed loader or a moon clip for carrying your spare ammo is that it is definitely faster to get the gun back up and running than a Quick Strip. But there are a couple of drawbacks that keep me from recommending speed loaders as my go to for EDC. The first is what I mentioned above, they’re hard to conceal. The round shape requires a pouch to conceal on the belt, which disrupts overall concealment, or requires a fairly loose jacket/cargo pocket to toss the pouch into. You’re not sliding one of these into your skinny jeans. The other drawback is that unless you’ve completely emptied the gun, a speed loader makes it impossible to do an admin reload. You’d have to dump all your remaining rounds and reload with the loader, whereas an admin reload with a Quick Strip is a piece of cake.

I have two guns…one for each of you

The famous New York Reload, as it’s called, is the practice of just dropping your first empty snub and drawing a second. Popularized by NYPD detectives in the revolver days, it remains a common response to as a way to carry extra ammo through mostly nostalgia. Here’s my big problem with the NY Reload, and why I don’t recommend it except for extremely unusual circumstances. If you have the space on your body to carry two revolvers, you have the space to carry one full size gun, negating the need for two small revolvers. A Glock 19 holds as much ammo as three of these guns, so carrying two is kind of nonsensical when you think about it. Again, there are small, niche use cases where carrying two J-frames does make sense, but for most people, if you’re really considering this just carry a Glock 19.

Hopefully these methods make sense, and you’ll have settled on one that works for you to carry a reload…if you think you should carry a reload. Again, I prefer speed strips, specifically the Tuff Products Quick Strips, to carry my extra ammo for small defensive revolvers.