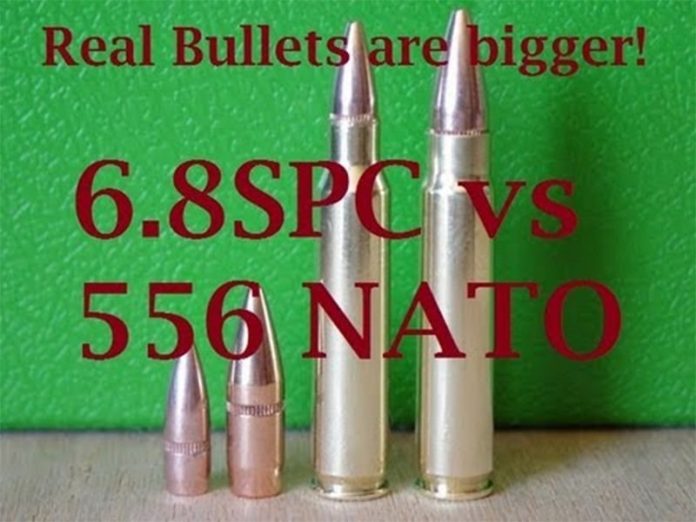 There has been long running debate over which is the most effective round and what our ground troops should be using, 5.56mm x 45, or 6.8mm x 43 SPC.

Why? Because of its terminal effects! In layman’s terms terminal ballistics is how the projectile reacts and what damage it causes when it strikes the target.

But don’t let me influence you in any way with my opinion; I’d like you to put your reasons forward as to which round you think is more suited for our troops.

To Neutralise – “To render neutral or inactive.”

To Incapacitate – “To render unfit, an inability to perform.”

I have on several occasions witnessed bad guys being hit multiple times by 5.56mm (F1 ball, Belgian SS109 used by Australian troops and M855 used by U.S troops) at varying ranges and then continued to fight…not good!! A soldier needs to feel confident that the enemy he has just engaged is DOWN and no longer a threat. This means one less problem that you and your team have to worry about.

I can hear some of you saying ‘well, be more accurate with your shot placement‘. Guys, I couldn’t agree more, especially in close quarter combat situations where you need to neutralize a threat immediately because reaction time is dramatically reduced. However, this can be quite difficult to achieve at times due to the pace of the contact, multiple targets, moving targets, obstacles, shooting on the move, etc. You may not get the luxury of pausing for that millisecond longer while your eye finds a sweet spot like the head.

Because we are issued with ammunition that has a very small projectile which delivers low energy, new training methods have had to be developed out of necessity to achieve neutralization or at the very least incapacitation.

One concept is to instinctively engage the chest with two shots, which in theory should buy you a fraction of time to then place a more deliberate shot to the head. Some CQB courses are now teaching engaging a target with up to six very rapid shots in to the center of mass.

I don’t know about you guys but I for one have issues with this:

I guess I could be accused of over analyzing this but it is the ‘one percenters’ like these that have the potential to put you in a very serious position.

[pullquote_right]You may not get the luxury of pausing for that millisecond longer while your eye finds a sweet spot like the head.[/pullquote_right]

The Belgian SS109 62gr (U.S M855 FMJ) contains a tungsten steel penetrator imbedded in the lead core that should (upon impact with tissue) help the projectile yaw and fragment. This isn’t happening all the time and as a result projectiles are passing through the body with minimal damage.

If 5.56mm is the only caliber that we can use, then maybe relaxing the international laws that govern what is humane and inhumane should be considered. The use of a heavier soft nose projectile or even ballistic tipped (plastic nosed) ammunition would be of benefit. It would deliver its energy to the target and will also have the power to punch through thin obstacles like chest webbing, heavy clothing, vehicle skin, etc.

It wasn’t all that long ago that soldier’s were happy with the 5.56mm ammunition that we were issued, but we were fighting a very different war than we are today. It was light, we could carry more, less recoil, etc. We also didn’t have a problem with conducting a battlefield clearance, ie; engaging wounded capable of continuing to fight or dead enemy as you fight through a position…it was a necessary evil to protect yourself…hence the term ‘Battlefield Clearance’!

So whatever happened to the good ole battlefield clearance?

Well, I’ll tell you, an increase of reporters in the battle space and social media happened! Posting footage of a standard infantry drill/tactic on to the internet via YouTube or on a news channel will change public and political support of the horrendous jobs that our brave men and women have to do. How many times over the last 10 years has this happened, sending the DOD, MOD or other coalition defence departments in to damage control?

This has severely kicked our ground troop’s job in the ass, all because outsiders complain about how we have to conduct our job!

Years ago 5.56 would’ve have been more than enough to do its job, now we fight in different circumstances with different rules….so we don’t upset the tree huggers and armchair hero’s…and as a result we need a change in calibre! We need something that will knock down a threat with a single round without casting doubts about whether or not the bad guy is still alive or capable of continuing to fight.

There are many ballistic charts that you can view on the web, most showing that velocity is reasonably similar between the 5.56mm and 6.8mm rounds. Compare a 77gr 5.56mm projectile against the 115gr 6.8 and it is very close indeed, however kinetic energy is anywhere from 40-50% greater at shorter ranges, and up to 35% out to 600 yards.

The 6.8 SPC round has the same energy at 250 yards as the M855 has at the muzzle. At 600 yards it has the same energy as a 7.62mm M43 at 275 yards, M193 at 250 yards and M855 at 375 yards. Since the 6.8mm is of a larger calibre and greater sectional density than the 5.56mm, it will use this energy more effectively when producing terminal damage. Performance can be increased slightly by using 110gr ammunition, giving you more velocity and less bullet drop over range.

The lower velocity of the 115gr ammunition combined with more kinetic energy makes this round less susceptible to deflection from soft cover such as foliage, shooting through glass (in the case of vehicle interdictions) and chest rigs.

6.8mm upper receivers will fit AR lowers, but you will need to change the bolt though and use specific 6.8 mags. I have fired 6.8 SPC ammunition from 5.56mm magazines but the heat that was generated expanded the mags – causing stoppages. The tolerances inside the mag are quite tight because the 6.8 cartridge is bigger in diameter. Although the calibre is larger, the difference in recoil is hardly evident and is quite controllable when engaged in rapid fire.

Ok, 6.8 will significantly increase your chances of neutralization or incapacitation with a first round strike. It goes without saying that different types of projectiles will produce different results, and that shot placement is still the key no matter what type of round is used. However, we can’t always achieve this, so the introduction of a large caliber that fills the gap between 5.56mm and 7.62mm is vital for the safety of our troops and is necessary in our fight against terrorism.

My guess is that money is the overriding problem. But perhaps it would work out cheaper to supply something that will do the job more efficiently without wasting ammunition…or lives!!

Photo courtesy of Guns Guns and More Guns on Youtube