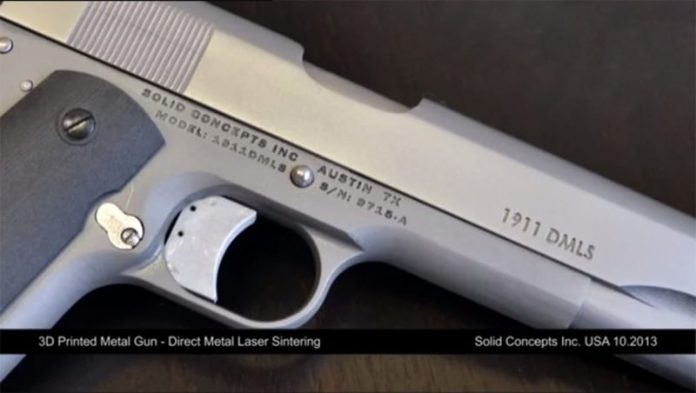 The video featured above shows part of the  test firing for the stainless steel 3D printed pistol. Nearly the entire firearm was printed, including the grip panels. The pistol contains 34 printed steel parts (and 2 carbon-filled nylon) and only 6 store-bought springs. The magazine was also purchased.

Much of the furor surrounding 3D printed guns had to do with the dissemination of Defense Distributed’s CAD files freely through the Internet (which the US Federal Government mandated DD to pull down). Excitement, and panic, was aroused over the ease of unregulated firearms manufacture that 3D printing allowed. Solid Concept’s printed 1911 does not fall into that category. Not only is the equipment needed to produce this firearm exceptionally expensive ($400,000-$1,000,000+ according to Solid Concept’s blog post on the subject), it also requires industrial/commercial amounts of electricity to run the equipment, which isn’t readily available in residential areas.

Thus far, the prototype has fired over 600 rounds with few errors (in the first test, the pistol didn’t always return to battery, an issue corrected with a stronger recoil spring and improving the contacting surfaces of the slide and frame. During the second test, the printed 1911 experienced a few minor extractor issues). The success of this of this metal 3D printed firearm wasn’t about creating a gun in a more efficient and cost effective manner, according to Solid Concept. Instead, it was to prove the concept that 3D printing, or additive manufacturing, if you prefer, can produce components that are precise and durable. This metal 3D printed pistol is proof positive.