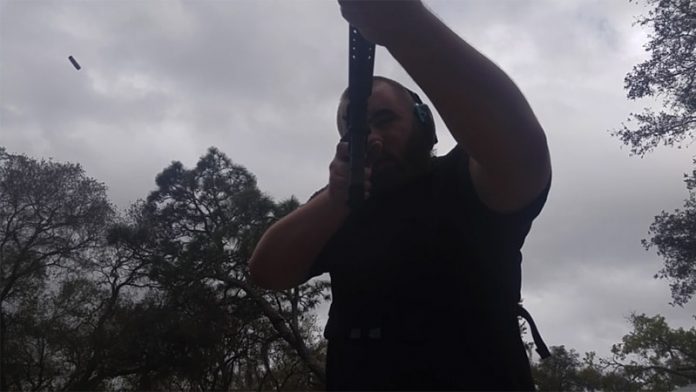 I’ve not actually bought an AR 15. The first one I ever owned was one I built, and after that, I started realizing building or more accurately assembling rifles is a blast. Since that first rifle came to be I’ve built 4 personal rifles and helped three friends build rifles. My fourth and latest rifle is a build kit I received from http://80-lower.com80-lower.com. 80-Lower.com is famous for 80 percent lowers, duh. However, they are a one stop shop for building AR’s. I have a few of their lowers and they are top notch. My next rifle will be built on an 80% lower, but until then I used an Anderson lower for this 300 Blackout rifle build.

300 Blackout is still an expensive choice compared to 5.56 or 223. The price is going down and the round performs well. I’m also shopping for my first suppressor, and the fact it will run subsonic without having to tune the rifle is attractive. I got to hunt this year with 300 Blackout and Florida has made hunting with suppressors legal so I want to climb that tree in the future.

300 Blackout would also allow me to use the magazines I already use for my 5.56 rifles. This kind of sold me on 300 Blackout over 7.62 x 39mm. There is also a lot of different manufacturers selling different loads of 300 Blackout rounds. It’s very easy to find hunting, plinking, and self-defense loads in 300 Blackout.

Overview of the 80-lower Rifle Kit

This is a rifle kit, and can be purchased with or without an 80 lower receiver. The kit includes a Magpul MOE stock and grip and a Magpul ambi safety. The upper comes with either an MLok or Keymod rail system, and I opted for 13.5 inch Keymod rail because I have more Keymod rail inserts and gear. The bolt carrier group is, of course, full auto rated. The barrel is 16 inches, topped with a flash suppressor, and uses a 1:8 twist. 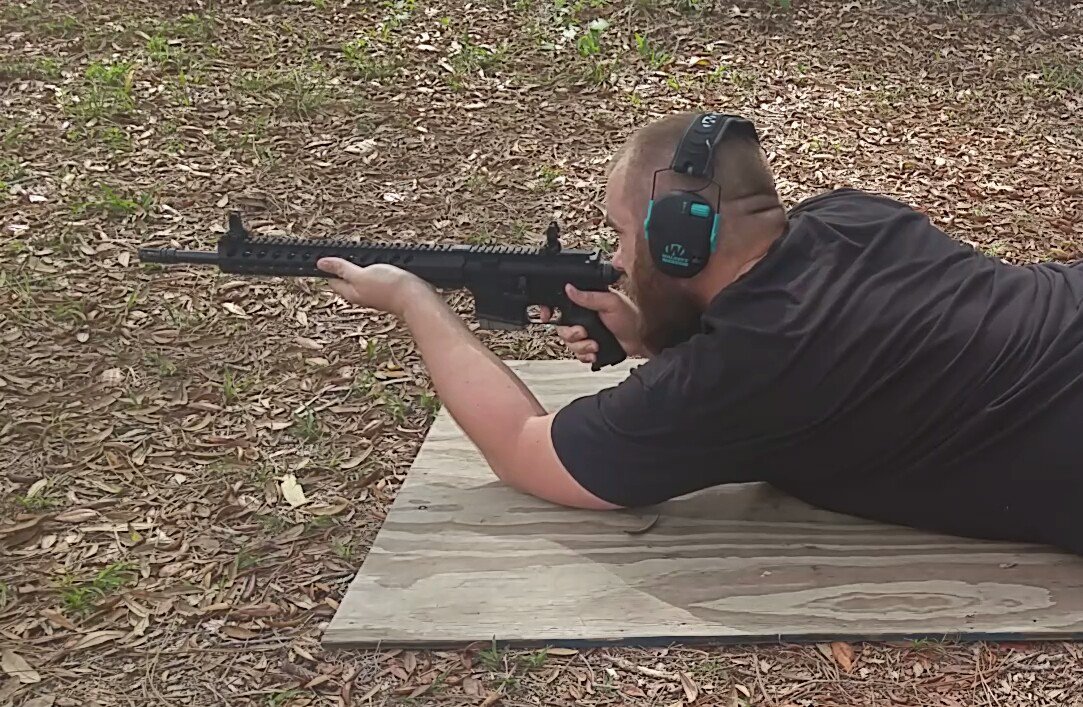 Slapping it all together

Assembling it is like building any other rifle, the ambi safety actually took me by surprise. I didn’t realize it was ambi, and I’d never installed one before. It all literally and figuratively clicked into place when I found the other side of the Safety.

Once it was topped with a set of XS Troy sights (not included), and I tossed in a Lancer mag, I found it to be a good looking rifle. The finish is a little different from the lower, but not by much. The finish on the upper and the rail system is very well done and applied very evenly. It’s durable too, I’ve been running it pretty hard for a few months. It’s been up and down a climbing stand, through the woods, bumping up and down in the back of a truck, and on the range a lot. The gun still looks great, and the finish hasn’t been rubbed raw or hard.

This is the third time I’ve posted this picture. It’s a three round group at 100 yards with SIG 125 grain match grade ammunition. The sights are XS Troy sights, and I was in the prone position. I’m really not that good of a shot, for as much as I shoot I should be a lot better. I was pretty pumped at the size of this group though, don’t hate too hard in the comments. 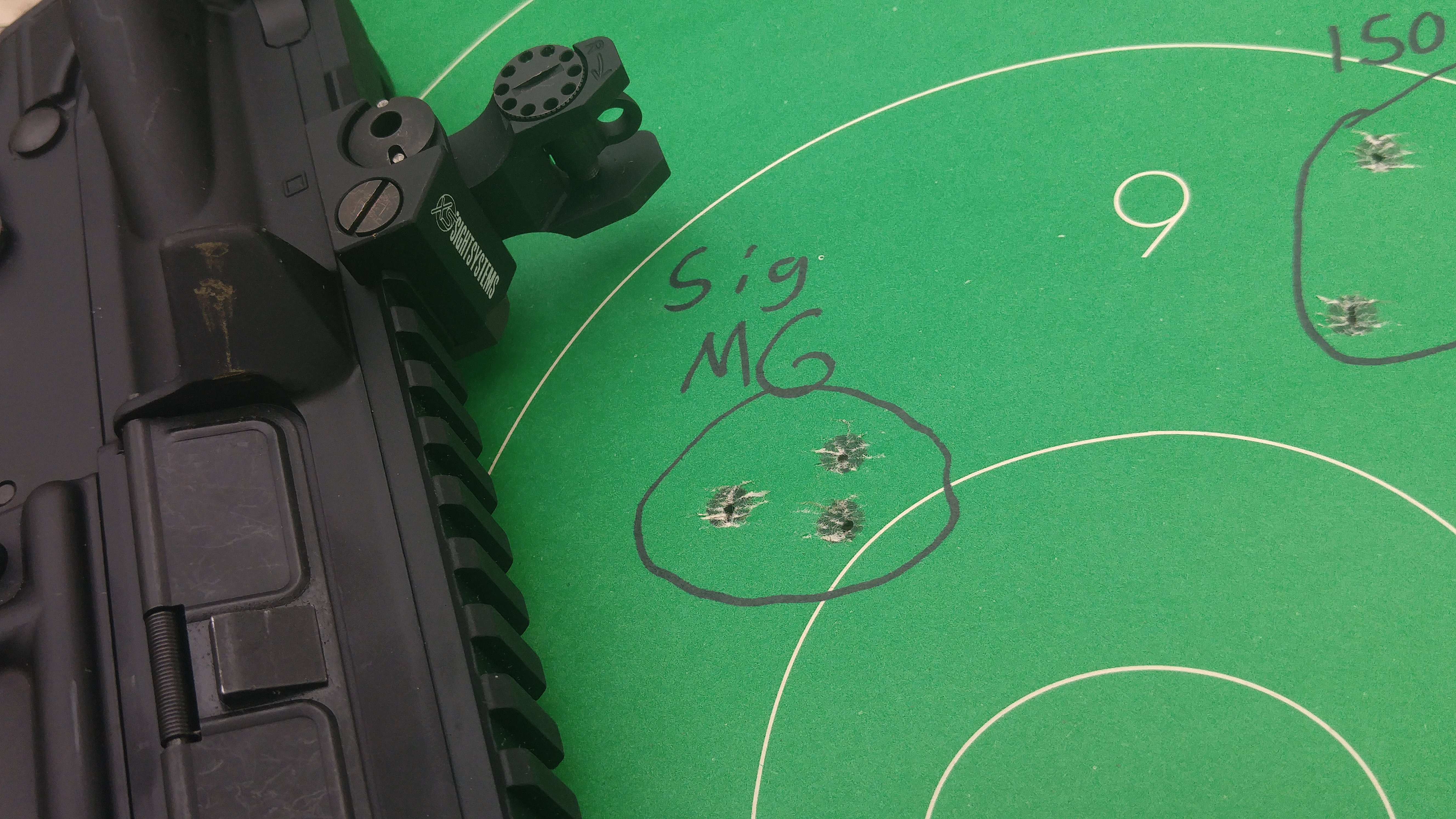 I knew I was reviewing this rifle and should have kept better track of the different rounds I’ve put through this rifle. Today, I can tell you I put a hundred rounds of SIG match grade ammo, 60 rounds of SIG hunting ammo, and 20 rounds of American Eagle ammunition. I’ve had to put at least 200 rounds of Armscor 300 Blackout ammo, another hundred of American Eagle. Plus I put a couple boxes of Remington UMC 220 grain subsonic loads through the rifle a few weeks ago with a friend’s can. None of these have caused even a minor hiccup in my 300 Blackout rifle.

I haven’t even cleaned the rifle, like ever. I apply a light coat of oil after I’m done hunting, and right before I lock it up. The internals got a light layer of Hopps right after I put it together. Since then, not a drop. Call me lazy, but this 300 Blackout rifle runs fine with a variety of different types of ammo even when it’s filthy dirty.

As you’d imagine recoil is minimal. I’d say a little more than a 5.56, but a little less than a 7.62 x 39. Firing rapidly and accurately is possible since muzzle rise isn’t an issue. The extended rail on this 300 Blackout rifle does allow for the use of a C grip if you swing that way.

Maybe this is a partial review of the Magpul stock, grip, and safety too. Either way, they do enhance how this 300 Blackout rifle handles. I’m particularly impressed with the MOE grip. It’s superbly comfortable in the hand and fits my XL mitts perfectly. 80-Lower.com was pretty smart to go a little above your average 300 Blackout rifle kit.

The stock is an A-frame design with three different points for slings. I’d like to see QD points because most of my slings where them. The stock is very smooth to lengthen and collapse. It’s comfortable in the shoulder and the rubber butt is textured and works well when wearing a plate carrier.

Lastly, the ambi safety is new to me. I cut my teeth with an M16A4 in the Marines, and since then as a righty had the need for ambi safety. I still don’t need one, but I really starting to like it. It is handy when changing shoulder to fire around barriers. As a safety it’s also easy to snap into place, it glides into position and gives nice tactile feedback.

If you are looking for a high-quality rifle kit for your next build I have no issue suggesting this kit from 80-Lower.com. It’s well made, affordable, and is a little different than a standard kit. The Magpul furniture and Premium LPK are nice touches. If you willing to build an 80 lower they do have a kit that includes a complete rifle kit and 80% lower. It’s a great way to avoid paying transfer fees and having to find an FFL to build a rifle.