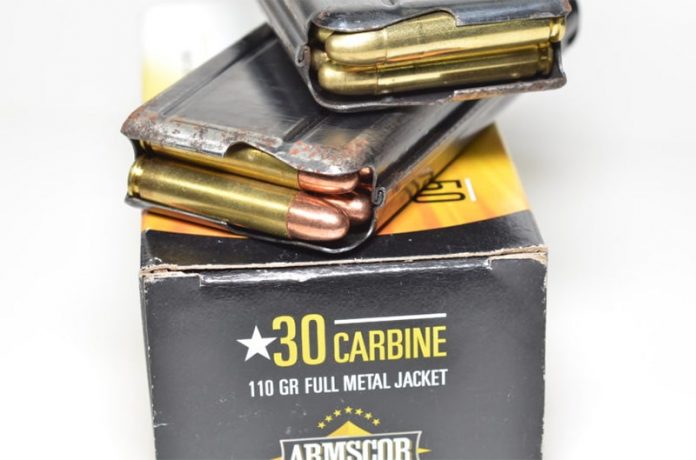 .30 Carbine for a home defense round ? I know even typing that sentence might launch the site into a whole new realm of craziness and drama. The .30 Carbine round and specifically the M1 Carbine rifle was tagged with a terrible rumor that it was ineffective and not lethal, there are hundreds of thousands of dead people that would like to disagree with those among us that might say that. It’s no secret here on the site that I think rather highly of the M1 Carbine and not just because I inherited one, or the fact my grandfather carried one in the South Pacific. There is a list of reasons the .30 Carbine might be a great home defense gun hiding in plain sight.

The M1 Carbine still sports the same dimensions it always has since it was first produced that being, a fine blend of 5.8 lbs worth of wood and steel. The M1 Carbine uses an 18″ barrel and has an overall length of just over 35 1/2″. The simple controls, sights, and handling characteristics of the M1 Carbine made it loved by many. The soft recoiling .30 Carbine offers the shooter easy follow up shots on target even when the shooter is highly inexperienced. This isn’t new information to anyone who knows the .30 Carbine round, but it must be restated before we can move onto our other points.

This is 2017, and ammunition design and manufacturing is lightyears away from where it was in the late 1930’s and 1940’s. Today commercial ammunition isn’t limited by the Geneva Convention Agreements and because of that faster, harder hitting hollow point and ballistic tip ammunition can outperform the old full metal jacket rounds of years past. The great thing about ammunition manufacturers is that if they think there is a market for something, they will bend over backwards to create demand that will drive their sales. Until recently the M1 Carbine Rifle and most other rifles chambered in .30 carbine were dirt cheap. Before the rise in prices it seemed like M1 Carbine’s were everywhere, literally millions of them were made and I’m going to bet that millions of them were bought up by World War II Veterans as fun guns to shoot on the farm or the range. That makes a huge potential market for anyone who could design and build a better performing .30 Carbine round.

That is where rounds like the Hornady and their .30 Carbine 110 Grain FTX Critical Defense round comes into play. Hornady is just one of several companies that dove into the new generation of .30 Carbine ammunition and began to design hollow points and ballistic tip rounds that give any other round you might use for home defense a real run for their money. I know some people reading this are screaming out in disagreement right now but lets look at the facts and the ballistics on three of the leading next generation .30 Carbine rounds. This data is straight from Hornady web site, and we will compare it side by side with other popular home defense loads. We are going to use the muzzle velocities because 100% of home defense shooting is done well under 20 yards.

It’s an eye opener for sure and it’s difficult to argue with the data that comes from the manufacturer, not some shady web site or guy at a private range. The numbers point to an interesting question, If you wanted to use a rifle for home defense and don’t want the fear of over penetration, is the .30 Carbine cartridge a viable option ? Like I said it’s hard to argue with science and data that has been collected. There are other reasons that make the .30 Carbine cartridge and rifle appealing for use as a home defense gun. Many of us are unaccustomed to having the adrenaline surge and dump that comes with responding to very chaotic situations involving burglars or home defense situations. In those situations it may be more difficult than we think to operate a pistol without shaking like a leaf in the wind. This is one of the many reasons when something like a long gun or shotgun is more beneficial, and frankly easier to use.

Why you Should make the M1 Carbine a Home Defense Gun:

The bottom line when it all boils down is that the .30 Carbine cartridge made by Hornady outperforms any pistol round that the majority of Americans will use in home defense. It offers more lethality with less chances of over penetration thereby reducing the chances of that bullet passing through the bad guy and through a half a dozen walls into someones bedroom. Is it time for you to dust off that old carbine and try to modernize it ? If you believe the data that Hornady has released, these new FTX rounds will penetrate 15″ of ballistic gel at 200o feet per second, when was the last time a 9mm did that ?