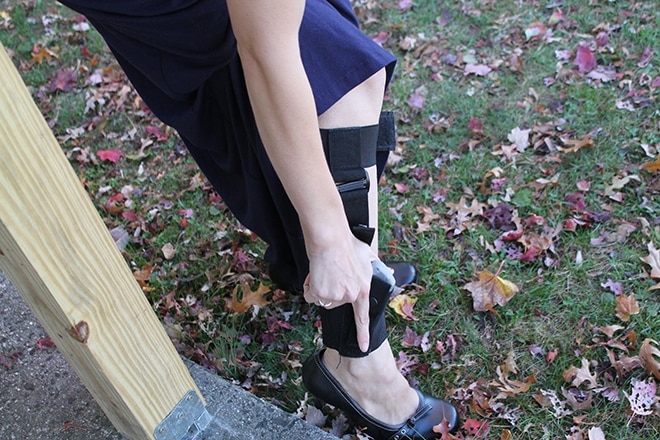 A backup gun in an ankle holster. (Photo: Guns.com)

Once relegated to the world of law enforcement the BUG, or backup gun, steadily crept its way into the lives of civilian concealed carriers offering a few benefits for those willing to pack an extra gun. These diminutive firearms aren’t mean to shoot long-range or pack an overwhelming amount of rounds but simply stand as a secondary tool to see the concealed carrier out of whatever dangerous spot they’ve suddenly encountered.

There are those that question the effectiveness or even need of a BUG, so here at Guns.com, we’ve rounded up a few reasons to consider carrying a backup gun if you’re not already.

1. If the primary fails, you have a spare

This second handgun, usually much smaller than the primary carry and carried in an inconspicuous area like the ankle, promises a last-ditch resort. While maintaining and practicing with your primary firearm should prevent any major mechanical malfunctions; sometimes, things just go wrong in the worst way.

If that primary gun fails in the middle of a fight or a bad guy wrestles it away a BUG, like a Kel-Tec P-3AT, suddenly becomes a viable ticket out of a bad situation. The second firearm grants the concealed carrier one more option in the fight. More options mean more opportunities to live another day.

2. Extra rounds if you need it

It’s good practice to carry a second loaded magazine on your person and practice reloads should a situation arise where more rounds are required, but sometimes even that isn’t enough. When facing multiple attackers, concealed carriers may find themselves in need of even more ammo than they’re packing in their primary gun. In this defensive situation, a second setup proves advantageous.

We can’t mention rounds without mentioning the New York reload. Made famous by New York police officers, the New York Reload completely ignores a traditional magazine reload in favor of swapping to the BUG. Thought to be quicker than reloading, a small contingency of concealed carriers still swear by the New York reload and therefore pack a BUG just in case.

3. An extra for a friend

Even if your primary gun performs flawlessly and there are plenty of bullets to put downrange, a spare gun still comes in handy — especially if a friend or loved one has put in the time to train. Facing off against multiple attackers, a concealed carrier with a BUG and a buddy can reasonably hand the spare to a friend thereby introducing another armed citizen into the equation.

Word of caution, though, a BUG should only be handed to a trusted individual or someone you are certain possesses the training and wherewith-all to tackle a defensive shooting situation.

A backup gun isn’t a solution for every concealed carrier; however, it’s a solid second option for those that want a little extra help when things go sideways. If you’re mulling over a BUG, check out Guns.com’s array of new and used semi-auto and revolvers worthy of backup.