The modern materials of the firearms industry are polymer, aluminum, nylon, and steel. Proprietary blends of these materials dominate the market space forming our guns and their accessories.

I had a discussion a few weeks ago and during that discussion out came an interesting statement.  “Modern gunsmithing is a machinists game.” In many respects that is true. The art is evolving as more and more platforms are mode modification capable.

But as the industry evolves certain classics remain. The 1911 handguns. Beautiful single action revolvers. Wooden stocked hunting rifles. Artistic over and under shotguns.

Kydex and the other hybrid polymers are the modern holster materials of choice and I have my share. They have significant factors in their favor including chemical resistance no break in period.

None of those factors eclipse the allure or function well made leather still gives you.

1791 Gunleather is a brand new company with two major goals. Manufacture simple high quality leather holster systems and make a true functional line of multi-fit holsters to simplify the holster search process. In the two years since opening production they have made tremendous efforts toward both goals.

The first goal is accomplished through material quality and detail oriented craftsmanship.

The second is a feat of engineering that has been so elusive the typical response to the advertisement of ‘multi-fit’ is one size fits none.  1791 claims to have solved this with a couple holster designs.

To back up their claim they sent me two holsters. Their model BH2.1 and model BH2.3 are their strongest contenders in a multi-fit crafted leather holster.

I have a Glock 19 and a Sig P226 to test the claims. In most conventional fitment respects Sig Sauer P22X series and Glock models are too dissimilar in frame to fit well in one holster.

Before the holster arrived I did a once over of the 1791 product line and website. I found a continuous stream of gushing pro-2A advocacy and amourous enamorment with handcrafted gun leather products. Even the name 1791 Gunleather is used to invoke the Constitutional Ratification and patriotically armed Americans bearing arms patriotically.

It felt almost comically overdone… and then I spoke with the 1791 crew on the phone and at SHOT Show and found out that they aren’t overdoing anything. The webpage is a toned down version of 1791 in person. They possess a passion for their products and the exuberance of a young company looking to firmly entrench their name in the industry.

The staff has the attitude but did the product live up to it?

Both the 2.1 and 2.3 arrived in storefront quality transparent plastic display boxes. An 8.5×11 sheet with the standard warranty (Lifetime), terms, and safety information was folded inside the holster bodies.

I had no expectations for these holsters beyond the baselines. 1791 was an unknown entity with no prevailing reputation. They were challenging a market space held by names like Desantis and Galco who both make several products I recommend.

Both holsters exhibited excellent initial characteristics. Leather was thick, well formed, and unblemished. The stitching was tight, even, and unfrayed. The base material quality and effort put into crafting felt excellent.

As new leather should be, the holsters were stiff. Sliding the P226 and the Glock 19 into the BH2.3 resulted in a firmly held pistol without any belt or body support. The BH2.1 is not crafted with a railed alloy gun in mind so only the G19 would fit but it was the same experience, hun held firmly.

Leather requires break in. I knew this but I wanted to evaluate the factory state. Putting the BH2.3 on my belt felt like wearing something akin to a brick. The leather was rigidly holding its original form. Sliding my P226 into the 2.3 pushed the slide out of battery, I corrected this with my thumb. With the added weight of the gun the brick comparison became more accurate still.

I tried drawing my P226 and was rewarded for my effort with my pants firmly seating themselves much higher and the BH2.3 firmly retaining the pistol. A second attempt with a full fledged wedgie freed the P226.

Believe it or not these are all things I wanted the holster to do.

Leather stretches and forms around the gun and your body as it gets used. If leather starts loose it will fail at retaining the pistol much more quickly. 1791’s holsters did not exhibit that often mischaracterized flaw.

To break in leather I use my Sig Sauer Sock. The very same product doubles as my Glock Sock. It is, in fact, just a clean thin sock you can wear on your foot. Leather flexes and compresses at a fair rate but a thin dress sock will accelerate the flex and compress process. Placing the sock over the gun and seating it into the holster provides a soft non marring layer that exerts additional outward pressure on the holster body. This increases the speed the leather will break in. Using the gun’s shape as the base inside the sock provides a more even expansion and does not over stress or under stress any one part of the holster.

The broken in 1791 holsters are more comfortable than paddle or belt mount equipped plastics. The leather hugs the waistline with firm pressure from the belt and conceals well under a sweatshirt or jacket very comfortably. Due to the angle of carry and how close the holsters keeps the pistol to the body OWB concealment is possible with minimal printing, especially with compact and subcompact pistols. 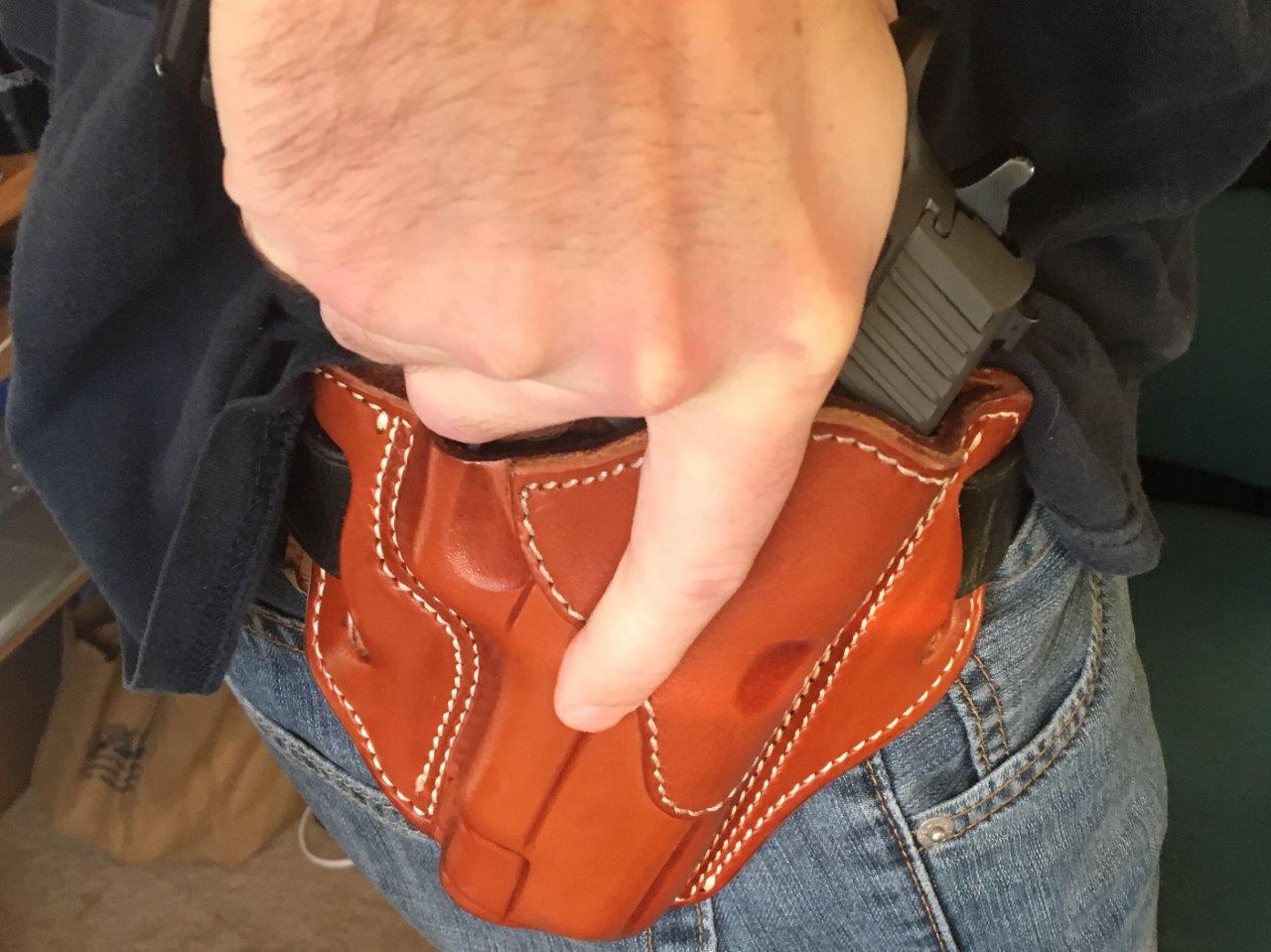 The compatibility list 1791 gives for the 2.1 is broadly encompassing but vague.

They don’t have an equivalent list right now for the 2.3 but the largest change between the 2.1 and 2.3 is the inclusion of railed alloy frames so it is likely a greater compatibility list.

From my own use I found 1791’s claims to be accurate within my testing capability. The BH2.3 worked equally well with my Sig P226 and my G19. Retention was comparable on both pistols resulting in similar draw strokes for both from the same position. When I picked up the P229 it’s results were comparable to the other two sidearms.

Wearing the BH2.3 for 6 weeks, working usually 12-14 hours with it on, the stitching and leather have endured beautifully. The only sign of wear is the fact it is worn in and more giving to body contour. It is the most comfortable OWB holster I currently have now that the early stiffness has been worn into a sturdy flexible form.

Ultimately I’m a kydex and polymer holster fan. I carry IWB most days with a G-Code INCOG Eclipse. On the range I use a G-Code Optimal Drop and an RTI OSH. I don’t often deviate outside these two holsters and I have several alternatives that see no use at all because of that.