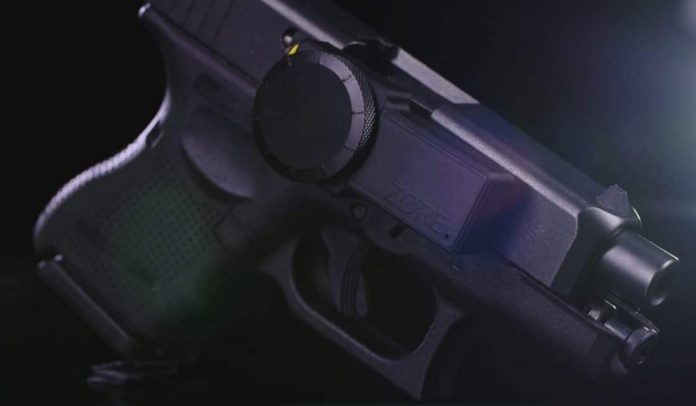 After two years developing a gun lock that allows owners to control the device electronically, Zore Inc, a startup founded by Israeli Defense Forces, is planning to pre-sale the items as part of a crowdfunding campaign.

“Unlike smart guns which are trying to save lives by defecting guns — we left the guns as they are — untouched (and perfectly working). Our lock just makes sure that gun owners are aware of their guns even when they are not on them,” said Yachdav Gilbar, a developer on Zore’s team, in an email to Guns.com.

The device, Zore-X, affixes into the chamber with a cartridge-shaped flange attached to a box-shaped external part and users operate the locking mechanism with a button on the rear. Pushing the button locks the slide ajar while the chamber is filled with the device.

In addition to mechanically blocking the action, the “bullet” that lodges in the barrel automatically expands to completely clog the chamber if tampered with. The feature is powered by a rechargeable battery, which holds a one-year initial charge.

Users can operate Zore-X manually with a dial and combination, but they can also take control with an app. With a registered device — any smartphone — users can lock or unlock the device and change security codes. Also, the app will notify the owner of any movement of his or her locked-down gun, any movement of the dial, or other tampering.

The app keeps tabs on battery power as well. Notifications are functional when the Zore-X Bluetooth device is plugged into a wall outlet in the vicinity of the locked gun.

If needed under pressure, once the user unlocks and removes the device, the handgun’s slide will drive forward and push a live round into the chamber. Initially, Zore-X will be available for 9mm handguns, but the company has plans to release models for .45, 5.56, and .40 at a later date.

While the company’s Indiegogo campaign isn’t live yet, sign-ups for notification are being accepted. Pre-production pricing starts at $97, with full retail planned at $197.