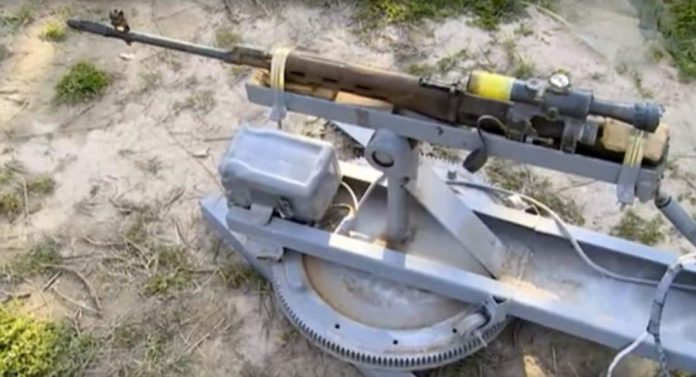 A Euronews report filed from Kurdish held areas close to the Iraqi/Kurdistan border includes a field expedient Combloc sniper rifle set up for remote use.

The weapon, recovered by local Kurdish forces, was reportedly operated from a position under ground with the gun on the surface. ISIS snackbar staff left a few lovable pooches around apparently in an effort to chase off random looky loos from pinching their busted-up SVD.

The short vid shows the gun platform in somewhat operation, able to adjust for azimuth by a geared wheel and elevation through a pushrod in conjunction with a small pinhole camera. Of course, trying to work out angular deviations from what the camera saw to where the rounds hit was probably a nightmare, especially at any sort of range.

Nevertheless, the gun reportedly caused several casualties among the Kurds who moved in to capture it.