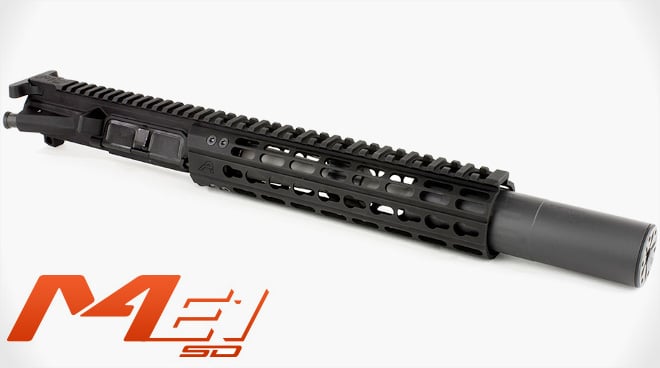 Aero Precision, Ballistic Advantage and SilencerCo have teamed up to produce a complete custom AR-15 upper receiver tuned to run suppressed full-time. Called the M4E1-SD, the upper is chambered for 300 AAC Blackout and optimized for suppressed fire with supersonic and subsonic loads.

At the heart of the M4E1-SD is a custom 7.5-inch Ballistic Advantage barrel with a down-sized gas port that takes advantage of the increased backpressure generated by the suppressor, to reduce any over-gassing that’s associated with suppressed ARs.

It’s a 416R stainless steel Hanson-profile barrel with a long taper from the chamber to the gas port and a medium straight contour out to the muzzle. The Hanson profile has a shoulderless gas block designed to improve barrel harmonics for repeatable precision. Combined with the alloy this is sure to be an accurate 300 BLK upper if the shooter does their part.

SilencerCo also contributed to the development of the M4E1-SD with an OEM version of their new .30-caliber Omega suppressor. The suppressor comes with a compact flat endcap and direct-thread adapter. It’s compatible with all other Omega accessories if you wanted to add a muzzle break, for instance, as a consumable baffle.

It’s not an integral system and you can change any the parts or replace them if necessary. For instance, if you prefer a longer handguard than the supplied 9-inch model you could very easily drop in a 12-inch rail, or swap out the KeyMod handguard for a Magpul M-Lok rail. All this helps make the M4E1-SD a very affordable package.

The suppressor is an NFA-regulated part and will require a tax stamp but the rest of the upper is unregulated. As it is it can be used to build 300 BLK pistols or with existing short-barreled rifle lowers — just like any other upper with a 7.5-inch barrel. Nothing is permanently attached and the barrel and can combined measure in at about 14 inches.

This is an upper that’s designed from the ground up to run suppressed. It uses some of best components and finishes available without turning to parts that would jack up the price to the point where it would be out of reach for the average shooter. As it stands this is an excellent package for anyone looking to get into suppressed 300 BLK and a pretty slick top half by all two-stamp standards.