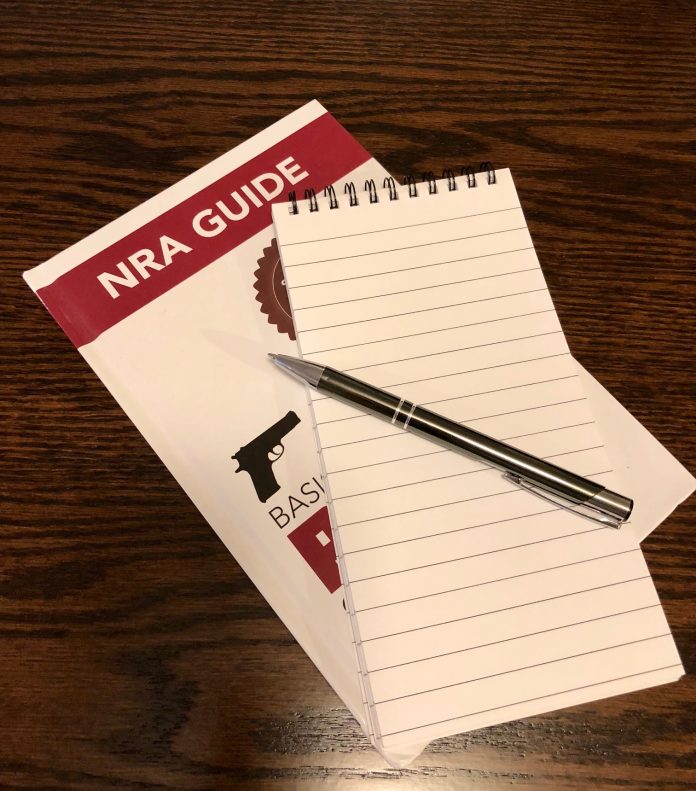 I had a ‘first experience’ while assisting with teaching an NRA Basic Pistol Class this past weekend. It taught me a lot about knowing what I don’t know. For that reason alone, I’m glad I agreed to do it.

For those who’ve never heard the odd phrase “I didn’t know what I didn’t know”, this refers to a novice or other non-expert in a field being unaware of their own knowledge gaps. Consider for example a new driver setting off on a first solo drive in the large family SUV, being unaware that a large vehicle on a windy day can be difficult to control during strong gusts. The young driver might be fine and never encounter a problem, thus giving him a false sense of security… OR a big weather front coming through might give him a few hair-raising seconds on the Interstate. They can’t teach you “everything” during a basic driver’s education course. Additional knowledge still has to come through experience and further study. The firearms learning curve isn’t much different.

I passed my NRA Instructor certification over a year ago, but have not tried to hold a class on my own, mostly because I still felt inadequately prepared. I felt my own knowledge gaps keenly. It turns out that I was correct in this self-assessment.

For this class I was more of an assistant-to-the-assistant, rather than “Instructor”, because I still had a bum post-op hand. There were a few more students than normal who had signed up for the class, and the husband/wife teaching team asked me to be another set of eyes and ears for them. I was happy to oblige. They brought all of their own AV equipment, handouts, demo guns, dummy rounds, targets, staple guns, real guns, real ammo, sandbags, extra eye and ear protection, folding tables, experience, patience and fortitude. I brought… myself.

Needing all of that gear alone showed me that I was not prepared to host my own classes yet. In addition to that, I discovered that I am more inexperienced with single action revolvers than I thought – particularly the idiosyncrasies of the borrowed one on the table – with which I was helping students to demonstrate their knowledge of loading dummy rounds.

Hopefully though, my inexperience provided a good example for the students. When I ran into a snag, I demonstrated that I was not afraid to raise my own hand as an “instructor” and ask the other instructors for help with the mechanics that we were having a problem with.

I’m not one to try to bluff my way through a situation. We physicians consult with other physicians all the time, so that mindset served me well. Recognizing ones own limitations is a critically important skill. In the cases of medicine and firearms, it can be a lifesaving skill as well.

Another area in which I found myself lacking was the ability to watch a student and then analyze inaccurate shots. Was it due to grip? Trigger slap? Anticipation? The student’s bifocals? A trigger pull that was too long/hard for the student’s hand strength? And was it the gun, ammo, or student technique that caused three stovepipe jams in a row? That analysis takes experience – experience which I do not yet have, but which hopefully can be gained with time.

In addition to my shortcomings I did also find out that I have strengths. This was a mixed class, but there were more women than men. The female students in particular seemed to respond well to my “style” of coaching and encouragement. That’s good to know. Sometimes I can be abrupt and curt, other times overly effusive. Whatever balance I struck that day seemed to be the right one.

I’m happy that it was a good experience for the students, because it certainly was an educational one for me. I hope I am asked to assist with future classes, because I know there is still more for me to learn about what I didn’t know that I don’t know. I suspect that this quest for knowledge and experience will be a lifelong pursuit.

Editor’s Note: 9 years into my own time as an instructor, and with thousands of students through my classes, I know more now than I ever have about shooting and am more proficient now than at any other time. I also know that the amount of knowledge I possess vs. the amount that exists continues to be a larger and larger disparity. For everything I learn I also learn of four things I don’t know yet, seriously a 1:4 ration of known vs. unknown. There is always someone who knows something you do not, period. Learn it, then learn the next item and the next.