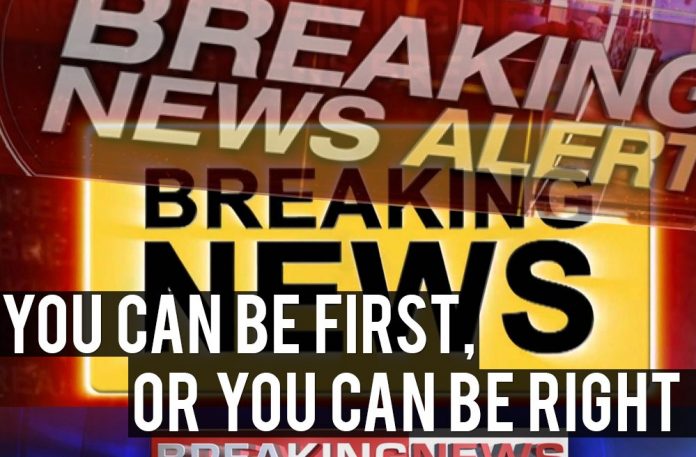 Initial reports are always wrong. Always. News organizations trip over themselves to be the first to report new information, to “get the scoop”. But an idiom applies: you can be first, or you can be right. Biasing on the former is what news organizations do–because people want it, so it brings the most traffic and viewership.

Social media only exacerbates this. We re-post and re-tweet incorrect information, especially if it’s a particularly tasty chunk that confirms our own preconceived notions, biases, or conclusions. Some people will release straight-up fabricated information, usually for a combination of narrative setting and ultimately, website traffic.

Of course, then you have assholes who insert their own agendas in the immediate aftermath.

After the failed car bombing of Times Square in 2010, before any information was known about the motives, NYC then-Mayor Michael Bloomberg guessed the bomber was

“Homegrown[,] maybe a mentally deranged person or someone with a political agenda that doesn’t like the health care bill or something. It could be anything.”

Of course as you may recall, the perpetrator was one Faisal Shahzad: a Pakistani-born follower of radical Islam.

More recently after the terrorist attack in Orlando we got this gem: 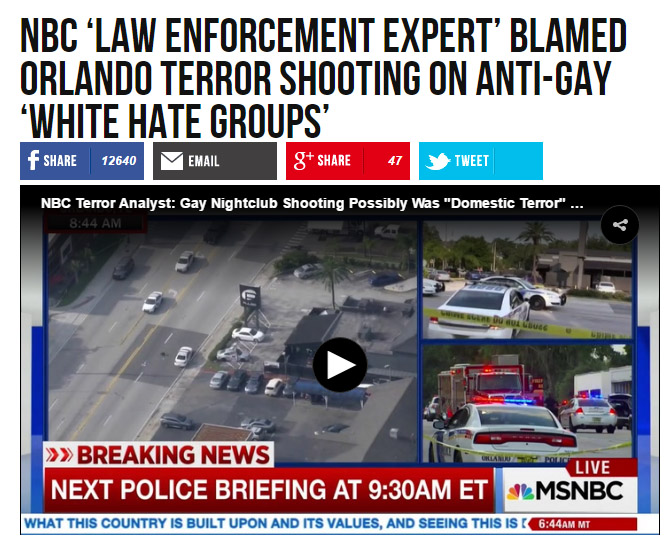 No doubt you can think of dozens of examples of this phenomenon.

So how do you cut through the bullshit?

First, you can just wait. Yes, that’s easier said than done. Unknowns bother people, which incidentally is one of the reasons conspiracy theories propagate–but that’s a subject for a different op-ed. No matter how you cut it, people generally want to know something now, even if it’s incorrect, rather than being patient and learning more later. So what to do? One very good resource comes from a place that may surprise some of you: An NPR station in New York, WNYC.

Almost three years ago they published a quick checklist of best practices regarding how to interpret news from active shooter events: 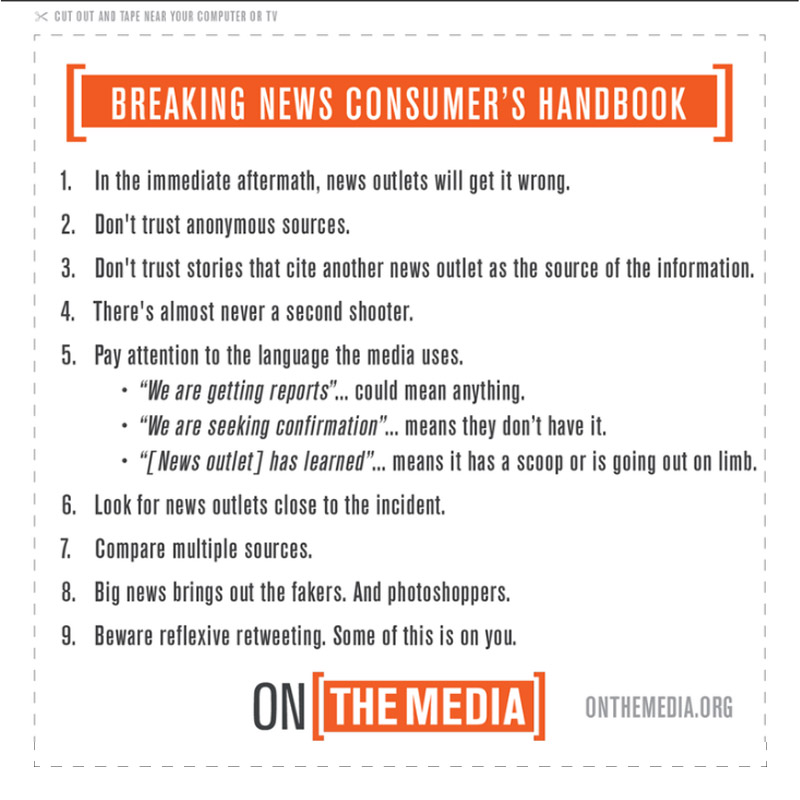 Late last year after the November 2015 terrorist attack in France, they constructed a similar cheat sheet specifically for acts of terrorism. Though both acts involve killing people, not all of the bullet points are the same: 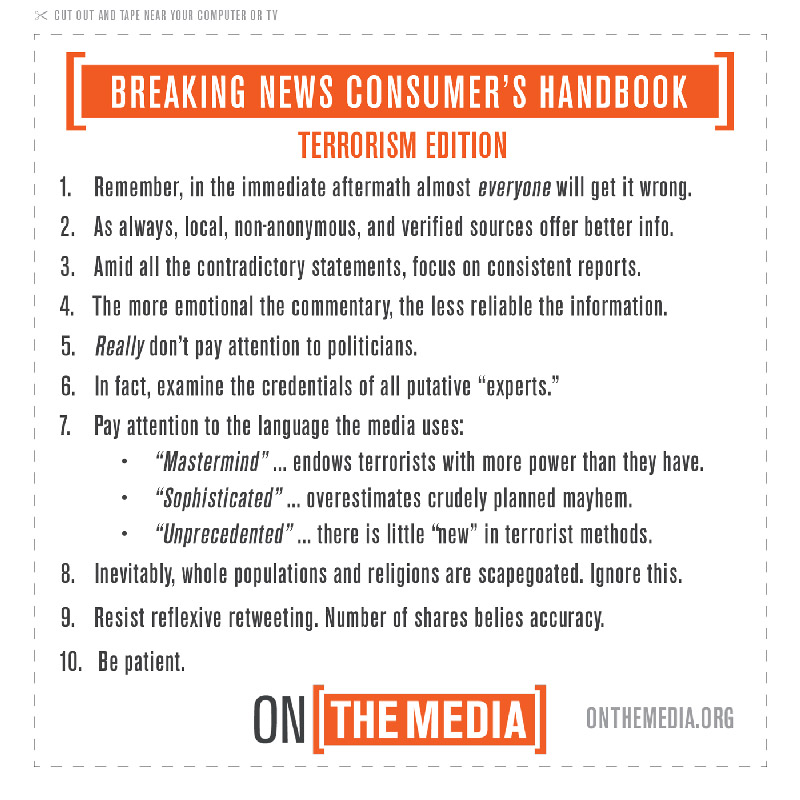 WNYC expounds a bit on each point on their page:
—
1. Remember, in the immediate aftermath almost everyone will get it wrong. Terrorist attacks are designed to sow mayhem and confusion. Even using best practices, news outlets, witnesses, and governments need time to get the facts straight.

2. As always, local, non-anonymous, and verified sources offer better info. Most news sources will be operating off of second- and third-hand information. Wait for trustworthy, verified reports from those who actually know.

3. Amid all the contradictory statements, focus on consistent reports.

4. The more emotional the commentary, the less reliable the information. Rational thinking is essential in these moments, as well as remembering the lessons of history.

5. Really don’t pay attention to politicians. Incidents like these are uniquely suited to political manipulation, especially in a campaign year, and politicians of all stripes will be tempted to push their favorite agenda.

6. In fact, examine the credentials of all putative “experts.” Just because someone worked in government doesn’t make them a terrorism expert. Even a CIA background is no guarantee of expertise.

7. Pay attention to the language the media uses:
“Mastermind” … endows terrorists with more power than they have.
“Sophisticated” … overestimates crudely planned mayhem.
“Unprecedented” … there is little “new” in terrorist methods.

8. Inevitably, whole populations and religions are scapegoated. Ignore this.

9. Resist reflexive retweeting. Number of shares belies accuracy. Even well-intentioned social media users will get things wrong. Better to wait than to share an inaccurate meme that could have negative consequences. In fact, generally…

10. Be patient. No matter what, the unfolding of the story will take time and mistakes will be made. Allow the coverage to develop and let those who were affected recover and respond in their own way, on their own time.
—
The program that accompanied the Terrorism Edition version of this checklist is definitely worth a listen. Here’s a salient excerpt, especially when you consider the incorrect photos of the Dallas shooter that were diseminated on Facebook and Twitter while the situation was still unfolding:

…I think that we have a human need for answers. We need to know who did this, and sometimes saying that it’s Daesh or ISIS isn’t enough – we need that face. This person did it and they are from Belgium, this person did it and they are from Syria. What’s so dangerous about it is once you’ve got that person’s face in your head or their name, it’s so hard to replace that with the accurate information. And then we get nervous. Well you told me that it was this guy, and now you’re telling me that it’s this other guy. We start to trust government a little bit less, we start to trust the media a little bit less, and I think that that makes us feel that we’re more insecure than we really are.

You can listen to the entire 16 minute broadcast here.

It probably isn’t a bad idea to take their suggestion and print one of these out to stick on a computer monitor.
-DFM