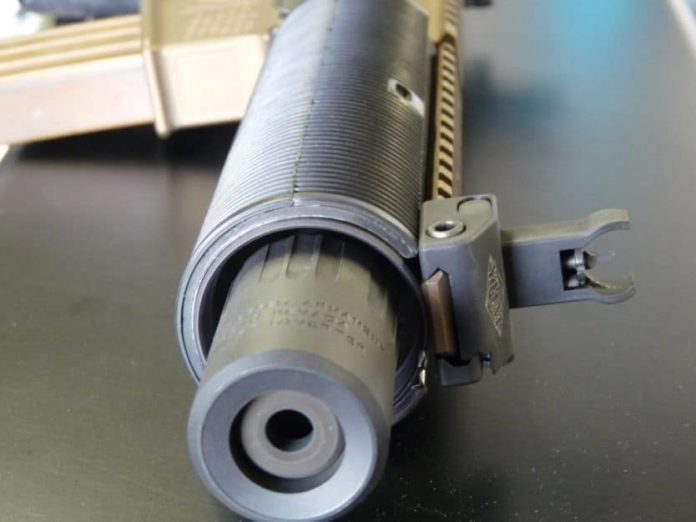 With the quality of primary optics being at an all time high, I’ve noticed a trend of many shooters skipping back-up iron sights (BUIS) on their primary fighting rifle.  I feel that if a gun is to be used for more than competition or as a range toy, BUIS are still a critical component to have.  I was able to get my hands on a set of Yankee Hill Machine’s (YHM) HK styled front and rear quick deploy sights (QDS) to see how they held up.

These BUIS’s are made from solid aluminum and are hardcoat anodized in matte black.  They are a scant .435 tall when folded.  They lock when up or down, with a small button on the left side (or port side for you squids) unlocking spring-loaded deployment.  The front sight is adjusted for elevation using a standard A2 front sight tool.  The rear sight is adjusted for windage by twisting the knob on the right side.  While the front sight has the HK “hooded” design, this set of BUIS’s differs from traditional HK sights by moving away from the “diopter drum” rear sight.  Much has been made by internet commandos on how this setup being used by YHM  isn’t functional without a rear diopter, the argument being that without a fixed front post being centered in the rear sight, the eye won’t naturally center the post in the circular sight picture provided by the rear sight.  I call BS!  In using the YHM sights, I found them to be perfectly functional.  More on that after this picture.

Take a look at the sight picture there:  Sure it’s hard to get the camera to duplicate what the eye sees, but you can use that for reference.  The circle of the front is centered naturally with the circle of the rear sight.  Minor adjustments for elevation can be made by adjusting point-of-aim slightly while keeping the circles lined up.  With that out-of-the-way, I can say the BUIS’s I have here are solid.  They spring right into place and lock up tight.  Zeroing was easy and they’ve held zero just fine during a number of range trips.  Adjustment clicks are crisp and tight.  These don’t feel flimsy or weak in any particular area.  I’ve actually taken off the primary optic (a red dot of middlin’ quality) and am using these irons for deer hunting.

As fate would have it, I was finishing up a near-ish Honey Badger clone when I came across these and the YHM’s hooded front sight fit in nicely with the intended aesthetic.  From a functional standpoint, these have performed very well.  Most of my experience with flip-up BUIS’s has been with the ubiquitously common plastic ones.  These feel very solid in comparison.  These run $218 on the yhm.net website and $184 on midwayusa.  These are good irons and I’ll keep banging away with them on my primary rifle.  As always, if I get more pertinent info on them (such as failure due to engineering flaw) I’ll post an update.