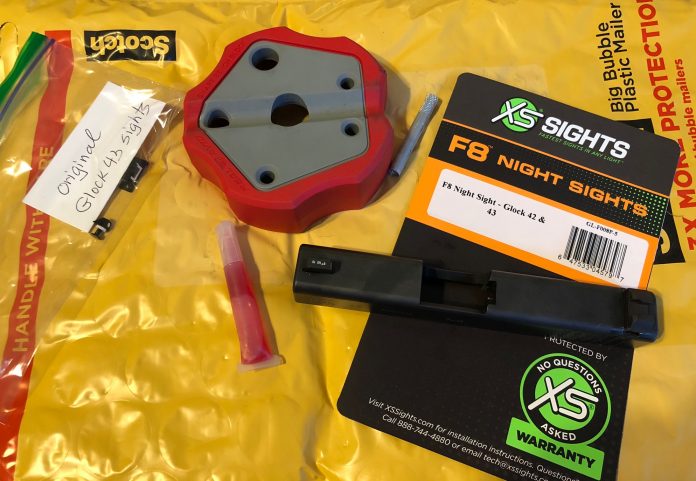 I admit that I am a “basic” kind of gal. I tend to get along fine with stock gear unless I have a good reason to change. I am also a “Glock Girl”, and my carry gun is a Glock 43.

I’m used to my stock Glock sights and did fine with them in a class from the Cornered Cat the other year. With that said, when I was given the opportunity to try XS Sight Systems F8  – with the big orange and tritium front sight – I decided to give it a whirl.

I’m getting older and don’t see as well in low light as I used to so I thought it would be wise to investigate sights which might increase my ability to acquire them quickly in less than ideal lighting conditions.

I had not ever installed sights by the “file to fit” method before. So I knew from the get-go that it would be a new challenge. But I also had too much “I am woman, hear me roar” pride to just hand it off to guy friends without even trying. So off to “YouTube University” I went in search of tutorials. XS does have videos and the sights do come packaged with thread locker and a front sight wrench, by the way.

To say that the installation experience was “challenging” would not do justice to the amount of swearing and blaspheming that took place at my kitchen table that evening. There is probably still a cloud of blue invective hanging over my neighborhood that you can track on your weather app. Admittedly, though I do own a good set of brass punches, I do not own a metal file. I was using an emery board because it’s what I had. It did work, but it took much longer than it would have had I just broken down and gone to Lowe’s for the proper tool.

The process – especially with the rear sight- was certainly not the “delicate” work that I thought it would be. It was more like file scraping, followed by pounding with hammer and punch such that I was sure I would break the tritium tube. After over an hour of scraping and pounding, followed by more scraping and pounding, I was finally able to force it to yield to my will. And the tube was still glowing when I was done! Yay!

I think I’ll invest in a sight-pusher next time. Or at least a proper metal file. It might keep me from having to do my Yosemite Sam impression for the whole neighborhood!

The first test of my new handiwork took place in the basement with a laser set-up. I was impatient to see if I had everything centered properly. I also didn’t want to leave the house because I had a loaf of bread in the oven (multi-tasking for the win!) It was a Sunday night and I was scheduled for hand surgery in three days, so I knew I wouldn’t get out to the gun club range before that happened. Thus the basement was what I settled for.

I was actually quite happy with the Laserlyte test. For reference, the circle is 5 inches in diameter (the IDPA -0 zone is 8 inches in diameter). I shot from 7 yards – roughly defensive distance. The grouping would have been better, but I had to remove the magazine and rack the slide after every shot, meaning that each shot represented a new grip, stance and sight picture. Even so, things were pretty consistent shot-to-shot. I was pleased. And there’s where I had to leave it until after my surgery.

After a post-op hiatus of about 3 months, during which I regained my grip strength and ability to rack a slide properly, I took my new sights out for an actual shooting test at my local IDPA match. I shot BUG (Back Up Gun) classification due to the size and magazine capacity of the Glock 43.

I was exceedingly happy with the results. I am never a “fast” shooter, and my time scores suffer for that reason, but my accuracy with the new sights was great! All of the steel poppers fell on the first shot, and all the targets that were stationary at close range or middle distance I scored down 0 or -1. The only targets on which I had worse accuracy scores than that were on the moving targets and the ones out to 15 or 20 yards. The Glock 43 is not a “distance” gun, so that was no reflection on the F8 sights or on my ability to install them properly. I was VERY pleased. The guys on my squad were also impressed and kept remarking upon how well I was shooting with just that little gun.

I can only think of a couple of drawbacks to this F8 sight. The first obviously would be the “ease” of installation, but I already mentioned my lack of strictly proper tools. I still get personal pride points for doing it all myself though. The only other drawback I can think of is that there may be some who simply do not appreciate a large dot front sight. I however, LOVE it.

One of the features that I really like about this sight system is that in addition to the luminescence of the tritium in both front and rear sights (providing “Figure 8” alignment), the front sight is surrounded by a large ring of orange which not only catches the eye in daylight, it also absorbs ambient light and then glows in low light as well. For an – ahem- “mature” person with aging vision like myself, that is a huge plus. The rear sight has a wide notch, increasing the amount of light around the front sight, and it also has a ledge which helps with one-handed manipulation of the slide. In addition to all of the above goodness, the XS F8 night sight carries a ten year warranty.

If you are looking for nights sights with an easy-to-find front sight for the daytime, the XS F8 may be the answer that you seek. I can heartily recommend it. (I also recommend you NOT be like me and invest in a sight pusher for installation. Sometimes being stubbornly independent has its drawbacks!)