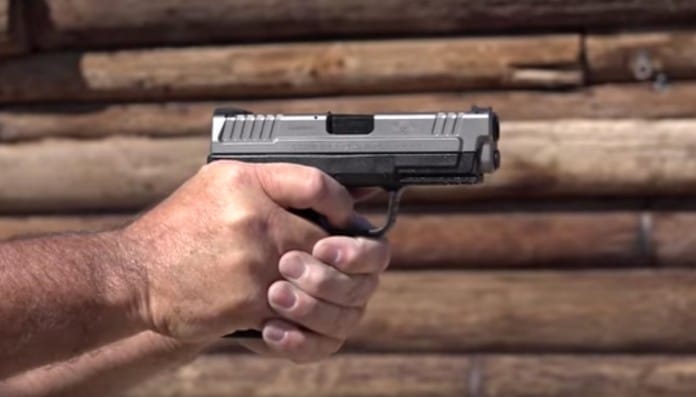 Springfield Armory is now shipping the newest Mod.2 pistol, the Mod.2 Service. The Mod.2 is an updated version of the XD series with a new grip profile and texture, along with improved controls and sights.

The Service model follows in the Mod.2 Subcompact’s footsteps with a full-size grip and 4-inch barrel. The Mod.2 series now includes four handguns, in 9mm Luger, .40 S&W and .45 ACP. The new Service model is being launched in 9mm and uses the same 16-round magazines as standard XD pistols.

Springfield also plans to launch a model in .40 S&W with a 12+1 capacity and both models will be offered in all black and two-tone, with a black polymer frame and stainless steel slide.

The Mod.2 series draws from both the XD-M and XD-S series with low-profile controls for concealed-carry, including a slim takedown lever, small slide stop and recessed ambidextrous magazine release. Coined the “Grip Zone,” the new frame profile maintains the same grip angle but adds subtle finger grooves, and three different grip textures for a solid purchase that won’t irritate or snag on the draw.

Other changes to the grip include a high undercut trigger guard and a slender beavertail for a high-up grip. The XD family of handguns has a lot of fans but there are critics out there who will point out the higher bore axis; these changes lower the bore axis and slim down the slide to reduce reciprocating mass and muzzle flip.

Additionally the slide has been updated with recessed slide serrations and a slender profile to match the lines up the new grip and frame. Taking a note from the XD-S playbook, it also has improved 3-dot sights, with a fiber optic front sight and a slanted rear white dot sight. The rear sight is extended for the longest possible sight radius.

These extras don’t increase the cost of the guns by much. For all the improvements the sticker only goes up by about $50 to $75, and the pistols are compatible with a lot of aftermarket components including sights, mags and fire control components. The Service model is expected to list in the same price range as the other Mod.2 pistols, in the mid-$400 range.

All of the little features that made the original XD series stand out are present with the Mod.2, including all four passive safeties; the trigger safety, the striker safety, the grip safety and out-of-battery safety. The Mod.2 also has the cocked striker indicator as well as the loaded chamber indicator, which offers visual and tactile feedback. The frame has a standard rail for lights, laser sights and other accessories.

At less than 1.2 inches wide at the controls and 5.5 inches tall, with the updated grip shape and texture the Service model is an excellent all-purpose pistol for self-defense, concealed-carry and home protection.