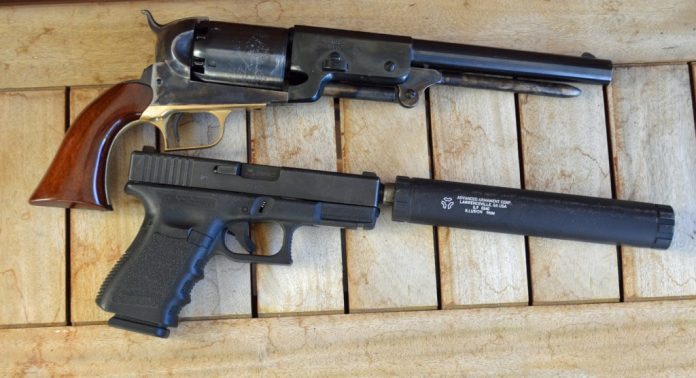 When most of us think of a tactical handgun we imagine a Glock, Sig Sauer, FNH, Heckler & Koch, Smith & Wesson or even a 1911 style pistol. Handgun innovation has transformed tremendously over the past 30 years, particularly with what we regard as tactical and in the handgun realm that appears to be the addition of tritium night sights, rails for lights and lasers and the introduction of polymer frames.

Would it come as a shock to reveal that the first tactical handgun was actually a brass-framed, black powder revolver designed in 1847? 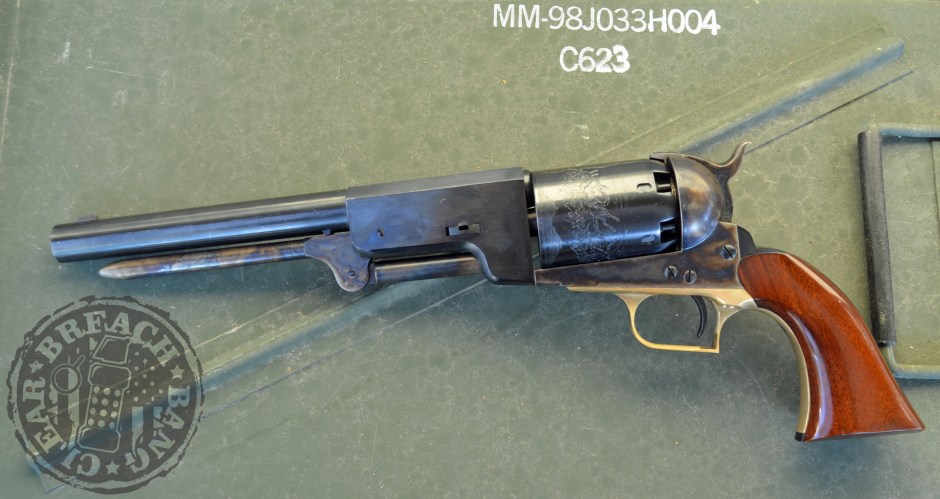 By that definition, the first tactical handgun was designed nearly 170 years ago as the Walker-Colt model of 1847.

Revolvers had been in existence for quite some time before Sam Colt secured a patent. These were for the most part “Pepperbox” types of revolvers that utilized multiple barrels that rotated as the hammer was cocked. The Pepperbox was heavy, cumbersome and prone to misfires or chain fires, where all the barrels would fire at once.

Colt’s idea was to use a single barrel and a rotating cylinder. His innovation was the use of a pawl or a clutch to lock the cylinder in alignment with the barrel. Hs first revolvers were built in Paterson, New Jersey, but for the most part were not very popular.

The reason for this was three-fold.

First of all, the power was pretty anemic when compared to a standard single shot pistol of the day. A .36 caliber ball propelled by less than 20 grains of black powder made it as more of a novelty piece than a defensive weapon.

Secondly, there were was a widespread economic crisis in the United States at the time known to history as the “Panic of 1837”. This meant that people did not have the disposable income to purchase a novelty pistol regardless of its innovative qualities, neither did the US Military.

Lastly was the passage of what was known as the “Militia Act”, which prevented State Militias from purchasing arms that were not in use at the time by the US Military. Although Colt made some sales of revolving rifles and shotguns to the Florida Militia for use against the Seminoles, the Paterson Plant closed and Colt declared bankruptcy by 1843.

His Paterson Revolver had become a favorite of Texas Rangers who often found themselves against superior sized forces of Comanche or Banditos. The caliber may have been anemic with a .36 diameter ball and a small powder charge and the mechanism fragile, but two Rangers: Samuel Walker and Jack Hays saw the potential in Colt’s pistol and came up with a design of their own for an improved revolver. 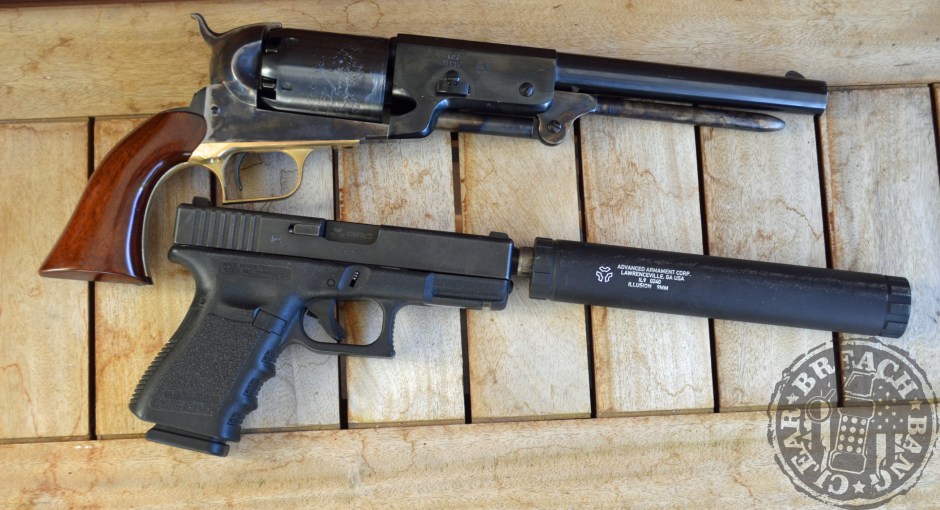 The pistol had to be powerful enough to kill a horse with a single shot. Walker decided on a .44 caliber projectile backed up by 60 grains of black powder in each of the 6 chambers (this was 3 times the amount of powder used in the Paterson). To take advantage of this velocity, the revolver would need a 9-inch barrel and the weight would be almost 5 pounds. Each Texas Ranger would wield  a pair of them in holsters mounted on their saddles, as belt holsters were not particularly common at the time.

Walker traveled to New York City to find Samuel Colt with his design for a six-shot revolver. Unfortunately, Colt had no manufacturing plant at the time, just the patent on his design. He turned to Eli Whitney to produce the first run of this new “Horse Pistol”. Eventually the revenue from the sales of the first 1,000 Colt Walkers to the Rangers would build the Colt Firearms Manufacturing Company and transform it into a powerhouse. 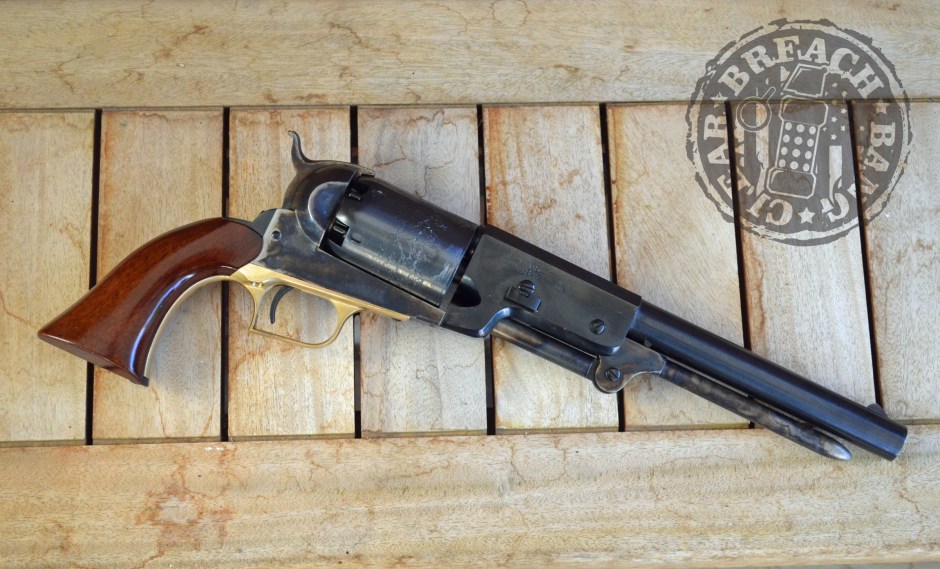 The revolver had problems such as rupturing cylinders caused by primitive metallurgy combined with powder burning across cylinder faces. The latter was remedied by greasing the cylinder face with lard after loading. The former caused a recommendation from Colt to load only 50 grains of powder as opposed to the requested 60. Another problem was the loading lever swinging down under recoil. Shooters would tie this off with rawhide to prevent it from happening.

The Walker would be improved later as the Dragoon Model within a few years and included a horizontal loading lever to prevent the lever from jamming the cylinder under recoil.

Original specimens are priceless, as very few survived from the time period. Luckily a few Italian firms produce quality reproductions that are better built than the originals.

Despite its use of black powder, the Walker and Dragoon models reigned as the most powerful handguns available until the introduction of the 357 Magnum round in 1934. 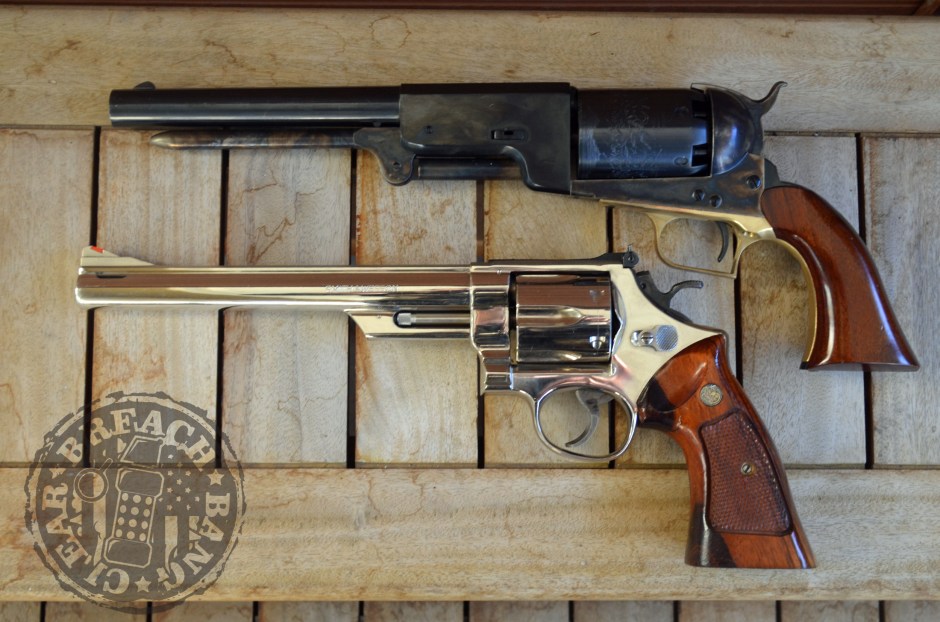 Eventually these black powder revolvers would give way to cartridge revolvers and then semiautomatic handguns. However, had it not been for a Texas Ranger who had ideas for a “tactical revolver”; the revolver could have ended as a mere footnote in history about a design that went nowhere.