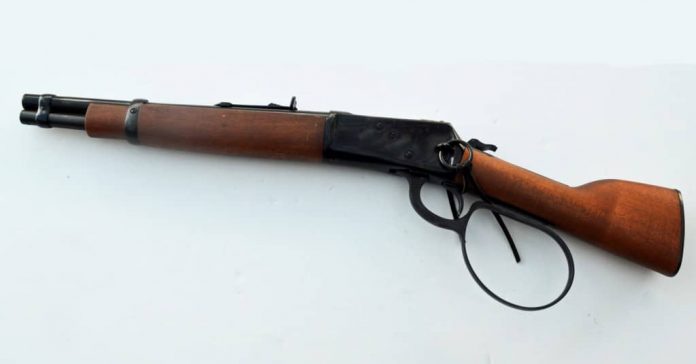 Ever since I was a kid I had wanted a “Mare’s Leg” pistol as used by Steve McQueen in the popular television show Wanted Dead or Alive. McQueen’s character, Josh Randall, carried a cut-down Winchester Model 1892 as a sidearm. However, finding a similar firearm in any caliber was a bit cost prohibitive. Under the National Firearms Act, to make a concealable weapon from a firearm originally made and sold as a rifle requires payment of a $200 tax, approval from the BATFE and federal registration of the firearm as a “short-barreled rifle”. 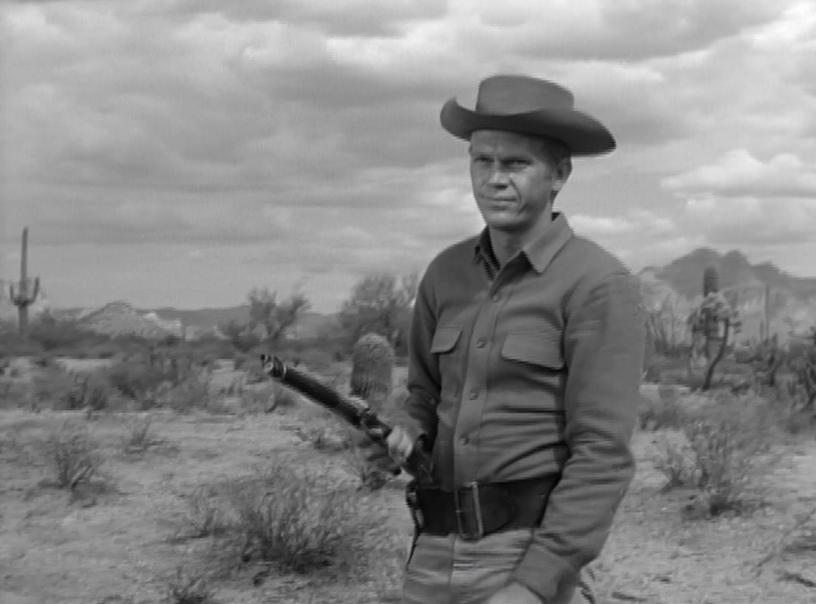 A number of companies have marketed functional reproductions of the Mare’s Leg, making them the same way as the original, by cutting down Winchester rifles (most of which are now considered collectible antiques). These reproductions have the same legal restrictions as the original: a rifle may not have a barrel length less than 16 inches without obtaining a tax stamp from the ATF, in accordance with the National Firearms Act. However, some companies made replicas registered as handguns, including Legacy Sports, JB Custom, and Eagle Squadron. These replicas had the fit and finish of an original Winchester 92 and a price tag to reflect this. These guns sell for in excess of $1200 retail, which is a lot of money to lay out for what can best be described as a “range toy”. 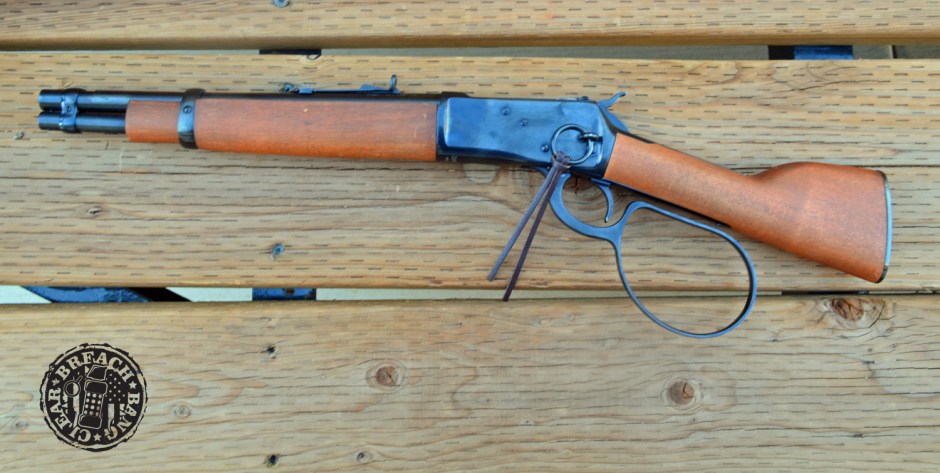 The original Mare’s Leg was made for the show by cutting down a .44-40 caliber Winchester Model 1892 rifle to a size that could be worn in a holster and shot one-handed. The barrel was cut down to twelve inches and most of the stock was removed. For filming purposes, three of these guns were made and all of them used a large loop on the cocking lever.

One gun had a slightly larger lever than the others and one had an octagonal barrel instead of a round one. As a result, the actual gun used on-screen could differ within a particular scene.

These prop guns were all chambered for the .44-40 round, but McQueen wore larger and more impressive looking .45-70 rounds in the loops of his cartridge belt.

In season one, a doctor, after removing a bullet fired from the Mare’s Leg from the back of a criminal, identified the recovered bullet as a “.30-.30 round.”

In 2010 Rossi Firearms began offering a Mare’s leg under the name Ranch Hand. The Rossi version is chambered in .45 Colt, .44 Magnum/.44 Special, and .357 Magnum/.38 Special. The Rossi Ranch Hand is manufactured by Taurus in Brazil and its price tag is half to one third that of the Italian gun makers.

We picked up a Ranch Hand chambered in .357 magnum/.38 special after handling one at the 2011 SHOT Show in Las Vegas. I remarked to a friend that, while I had been a collector of turn of the century Winchesters (specifically pre World War 1) that I had been spoiled and any lever gun made after 1964 seemed “cheap” to me, regardless of the manufacturer. His response was “They’re cheap, but they’re still fun.”

The Ranch Hand came in a plain cardboard box, with a 12″ barrel and a walnut stock. Fit and finish was very similar to a post 1964 Winchester Model 94. The lever is a large loop and the saddle ring is a permanent fixture as opposed to a screw-in type. The safety works like a typical pre-64 Winchester with the hammer at half-cock, backed up by a secondary if somewhat flimsy safety lever on top. There is no provision for mounting a scope or a tang site and the tang seemed somewhat longer than those found on Winchesters. The front sight was a highly visible gold bead with an adjustable rear. I chose the .357/.38 version for the ability to run cheap ammunition. This would not be a hunting or self-defense piece, just something to have fun with at the range. I have heard skeptics in the gun community ask “How do you shoot that thing?, “What’s the recoil like?” and the ever-present “Why would you want something like that?” 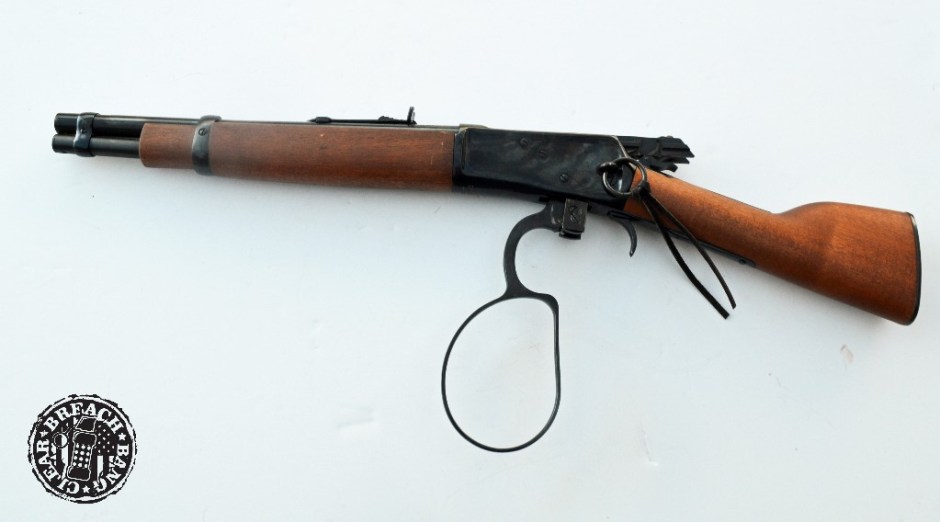 I fired the ranch hand in a number of ways: single handed, like a long-barreled pistol (Thompson Center Contender), from the hip with two hands (one on the forend) and “mock rifle style”, positioned like a rifle. True to form, however, the stock is too short to attempt any kind of shouldering. That’s the way it should be in this case, as this is a handgun.

At 50 yards the Ranch Hand was dead on with semi wadcutter .38 specials. Switching over to the hotter .357 magnum loads, I found the point of aim to be a few inches higher and the increased recoil felt very slight. The only rounds which did not perform well were my .38 Special full wadcutters where the bullet is seated flush with the case mouth. The overall length on these rounds were too short to cycle reliably, but worked fine when individually loaded into the chamber. 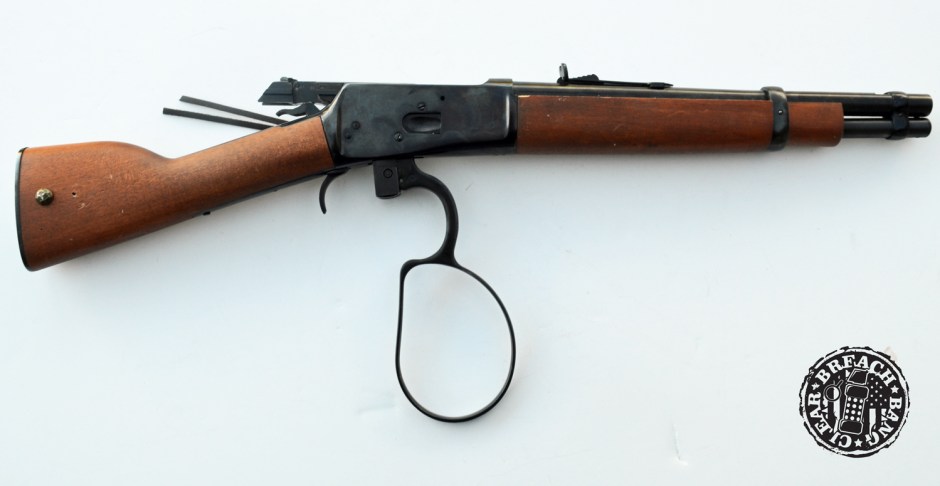 It may be impractical for hunting and the hiking trails in Northern Nevada as a sidearm, and I would definitely prefer a revolver in the same caliber for self defense against any local predators. However, for blasting away at targets at the range and pretending to be Josh Randall for a few hours on a Saturday afternoon, there’s really no substitute.

If you don’t get it or still think it’s goofy, but like the concept of a Trapper Style Winchester with a 12″ barrel, it makes a good start for that project by paying the $200 tax and investing in an aftermarket butt stock. We are hoping to start that project soon with one of these in .45 Colt or .44 Special, possibly with a threaded barrel. Stay tuned!