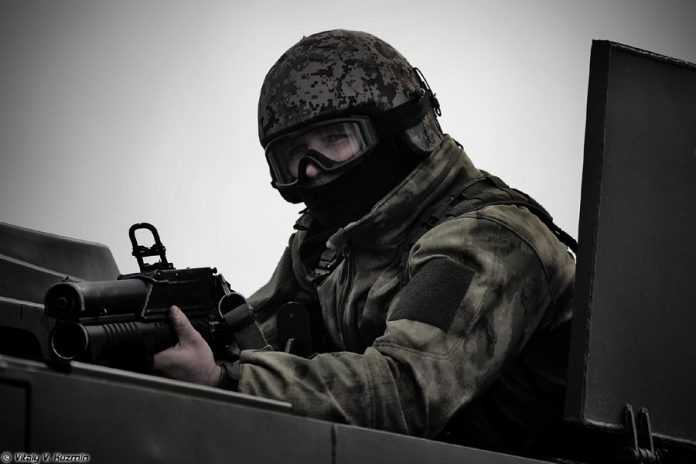 Though the GM-94 might not be as efficient or have the same capacity as an M32 MGL, no one can argue how entertaining it would be to use for social work and polite admonition during riots, urban unrest and/or any public gathering of social justice warriors. Though it is frequently described as a pump action multi-purpose grenade launcher for “Special Forces” and urban combat, that isn’t entirely accurate. The 4-shot (3+1) tube might originally have been developed for Russian SOF units, but since then it has been employed by police and PMC personnel as well — interestingly, not always by Russians in Russia either. The weapon can be used to deploy a number of different munition types, from HE and thermobaric rounds to less lethal NFDD-, smoke, aerosol and kinetic baton type rounds. It has been seen in Ukraine, Crimea, Syria, at Sochi during the Olympics, in Kazakhstan, possibly in India…. and of course in Far Cry 4.

The GM-94 is commonly used by a number of units in the Russian military and, because of increasing levels of unrest, in ever more widespread use by policemen in such units as OMON (Otryad Militsii Osobogo Naznacheniya. The latter is a somewhat generic term for anti-riot and anti-terrorist law enforcement units existing in most of the Russian Federation’s 74 provinces, with additional units in larger cities like Moscow, St. Petersburgh and Novosibirsk.  The appellation GM-94 actually indicates police use, as we understand it; in the military it is referred to as the LPO-97 and is categorized as a flamethrower. 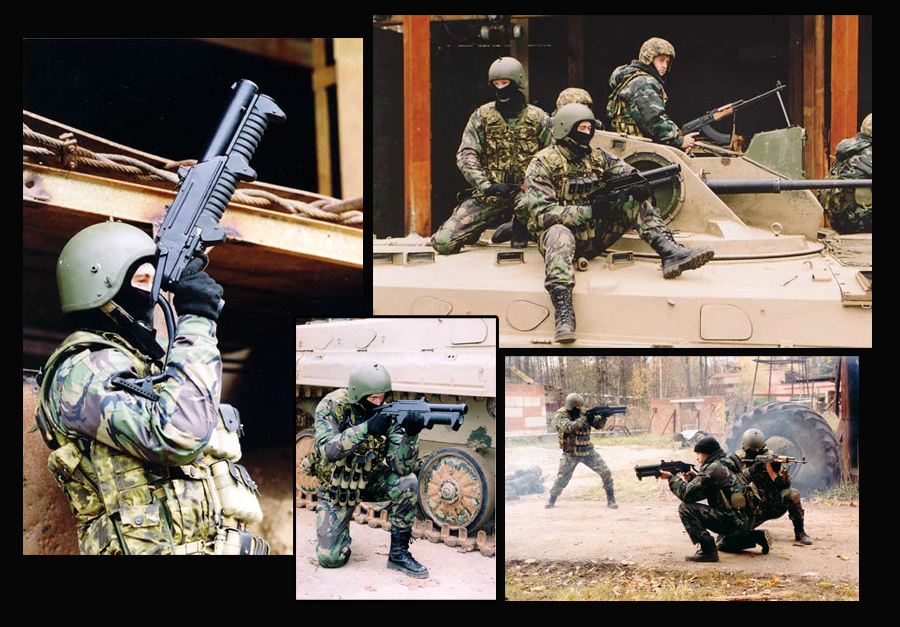 They are also in use by personnel of Russian-staffed PMCs in various locations, though these are in large part headquartered outside the RF. PMCs are not allowed under Russian law, though PSCs are. Large numbers of former military and FSB officers are serving abroad (counter-piracy on shipping, site-security in non-permissive foreign countries like Syria and Kurdistan) and at home (Gazprom, a massive gas company, and Transneft, the Russian oil pipeline company both have substantial and heavily armed security contingents, often armed and armored as well as small military formations). 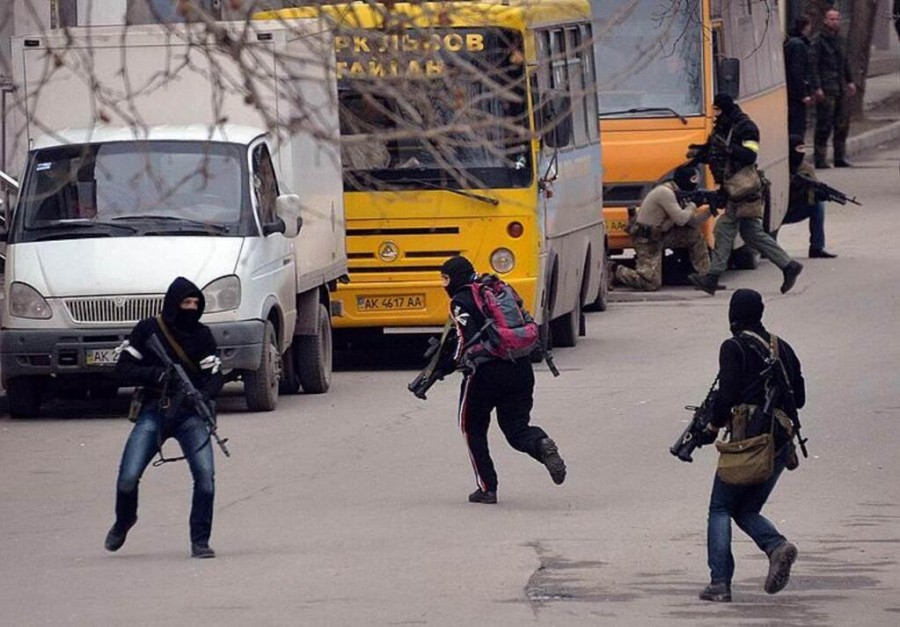 Despite assertions to the contrary, many experts opine use of the GM-94 is not limited to use in the Russian Federation but has also been exported to India and other places — though we weren’t able to confirm this without a hell of a lot more work. Things being the way they are, however, it’s safe to assume you can get one if you have enough money.

The GM-94 is reminiscent of (though far more mechanically reliable than) the small number of Vietnam era manual action 3+1 40mm grenade launchers used by NSW teams. It is produced by the KBP Instrument Design Bureau (Konstruktorskoye Byuro Priborostroyeniya) in Tula.

Fired with a DAO trigger, the weapon’s manual action ejects a spent cartridge downwards, cycling a new one in from a tubular magazine located above (not below, shotgun fashion) the barrel. A simple folding stock allows it to be carried or stowed compactly, though folding the stock this way would obscure the sights. We haven’t found any open source instances of firing the weapon in this configuration, which is probably not a comfortable procedure. 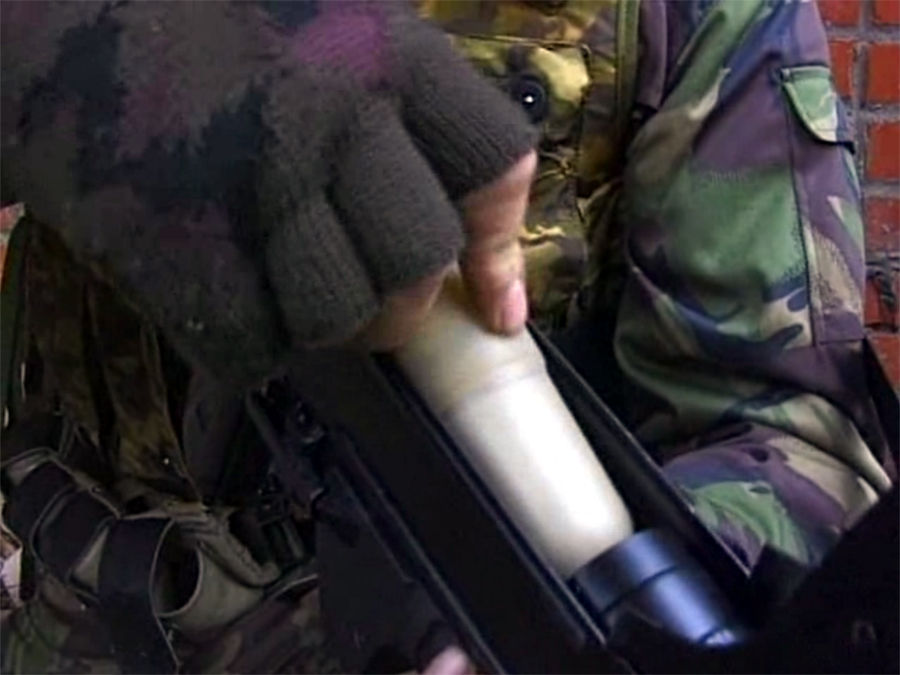 Of the various 43 mike mike rounds it can use, perhaps the most notable is the fuel-air version that can be used indoors at ranges of, according to the manufacturer, 10m. This 43 x 30mm round has a rimless plastic case (the propellant and primer are at the bottom in a steel insert) with a point-detonating fuse. Although it is equipped with iron sights, specimens have been seen “in the wild” with a variety of optics aboard. The safety is an ambi lever located immediately above the pistol grip.

If you’re looking for more information, check out out the treatise produced by ARES Armament Research Services here, it’s an outstanding and very thorough brief.

You can find the manufacturer’s information in English right here.