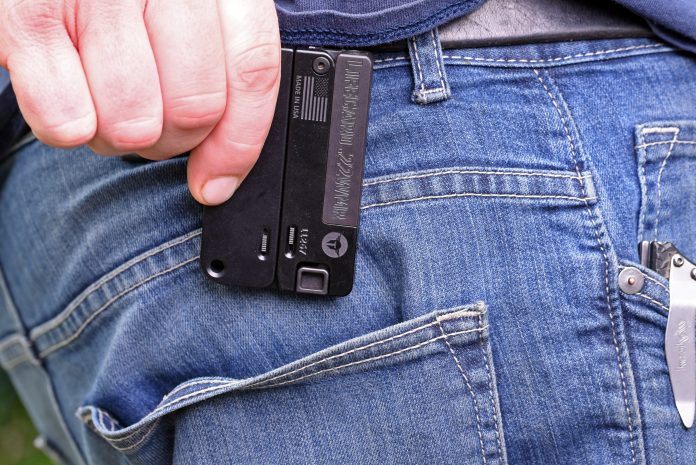 With the firearms market flooded with small compact carry pistols, it is not often you come across something truly unique and different. You know the old saying, You can’t reinvent the wheel. Trailblazer Firearms tried to do just that with the LifeCard Pistol.

A single barrel, single-shot handgun that folds up to about the dimensions of a credit card and is just about a half of an inch thick. LifeCard only weighs 7oz. The entire gun is made of metal. The barrel, bolt, and trigger are made from 4140 pre-hardened steel and the frame and handle is made from billet aluminum. The package is coated in a very attractive black Corrosion Resistant Isonite and the aluminum is anodized. Its design is extremely clean and extremely subdued until you flip the latch to open it.

The handle features storage for 3 additional rounds of ammunition. To unfold/fold the gun you pull a very small slide latch down. The slide latch unlocks the handle. You can then fold it or unfold it. The process is fairly simple however, a bit difficult for anyone with normal size hands to operate quickly.

What is This Thing?

It is very obvious this is either a kind of niche market firearm, or a result of a “someone could so they did” situation. It is extremely lightweight and extremely concealable. It is also completely ambidextrous. Really the perfect recipe for a carry gun right? It fits in any pocket comfortably and extremely discreetly. Trailblazer actually says they designed the thing to be able to fit in your favorite breath mint tins. The size is definitely the main strength of this little guy. Chambered in .22 WMR adds a little more power over the earlier .22LR configuration.

It’s a firearm that can be concealed in any pocket, bag, or even in many undergarments.  It also has that head turning unique factor built in.

Does it Make Sense?

It’s a single-shot .22 WMR handgun. Sure, you could definitely stop a threat with a .22 WMR. However, you only get one chance to do it with the LifeCard pistol. The process of firing that single round is just that, a process. Assuming you already have your single round of .22 WMR loaded into the barrel of your LifeCard, you now have to pull the tiny thing out of your pocket, purse, holster, bra, pack of cigarettes, or maybe even that hard to open mint container. Your nervous hand has to then figure out which side of the firearm is the barrel oriented on and make sure you are sliding the correct latch to open the gun.

Then, you need to grab onto the tiny little hammer on the back of it and try to pull it back to set the trigger in the fire position.  If this process was not enough, you now have to attempt to point this little tiny thing with no sights and only a 2.5-inch barrel at your target. If the bad guy was close enough that I needed to effectively engage him with this gun. Chances are, I am already going to be engaged in hand to hand combat and this thing will never be deployed since it requires 2 hands to operate.

While the gun does have a unique appeal to it due to its folding design, making it look nothing like a pistol. The overall size when it is deployed is comparable to something like the Ruger LCP. The LCP is really not much larger, ready to fire upon drawing, and holds at least 6 times the ammo in a much more powerful and more reliable centerfire cartridge. The price point on the Trailblazer LifeCard actually comes in higher than the LCP as well, with an MSRP of $399.00. You have multiple centerfire options that you could pick up instead with ammo and a holster and still come in less than just the LifeCard.

The act of folding and unfolding really is very simple at the range when not under stress. It does take a slight amount of practice to understand the functions, but is pretty simple to operate overall.  Loading is as easy as opening the gun and then pull the second slide latch to release the barrel.  The barrel breaks open and closes itself pretty much by just letting it fall back in place. Prepping the gun to fire, pulling the small hammer back sets the trigger. Everyone that fired it was able to pull back the hammer and squeeze the trigger without issue.

Firing the gun is interesting. The recoil is not as bad as one would think. The odd rectangular shaped grip isn’t exactly ergonomic by any means, but it works. The LifeCard is pretty fun to shoot and definitely produced some good laughs at the range.  It throws a giant ring of fire towards the target which seemed to draw a whole lot of attention at a public range.

Accuracy is, well, it’s not. The LifeCard throws rounds where ever it wants. One round up high, the next shot down low, how the hell did that round hit the floor when I was aiming center mass? Yeah, it really has no accuracy.

The Choice is Yours

The LifeCard is a very entertaining unique firearm. I would not carry it as my only carry gun. However, I do think it would make an acceptable backup to my backup gun for EDC. If the straights are really that dire.

It would take a lot of practice to efficiently deploy in a high stress defensive situation. Its usefulness will certainly be up to each user specifically. For some, a gimmick, to others, it may be a solution. Regardless, it’s a unique and innovative design that holds up to Trailblazer Firearms slogan, LifeCard will be the last gun you’ll leave behind. Learn more at www.trailblazerfirearms.com.