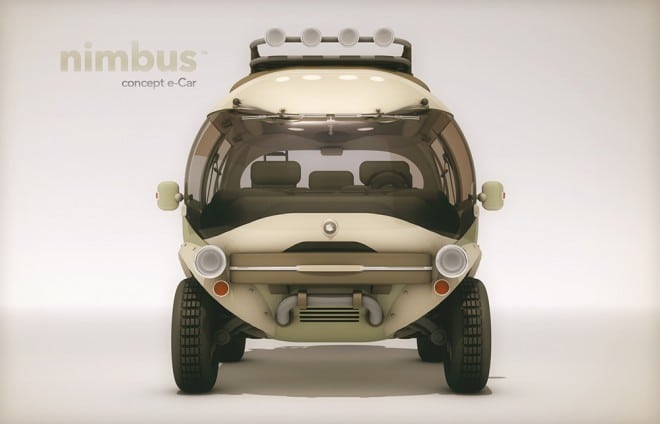 The Nimbus, a concept electric car designed by Brazilian designer Eduardo Galvani from Hemisferio Criativo, looks like something out of a Pixar film–it’s bubbly, shiny and awfully cute. Those aren’t words I tend to think of when I think of the ruggedness of overlanding, but I like that Galvani is thinking outside the box when it comes to adventure vehicles.

Galvani writes, “Nimbus™ is a concept e-car made for short dislocations in urban streets and distant trips in long roads. Its hybrid engine and energy comsumption system provides greater driving range and energy saving than the all-electric cars.” The vehicle sits 5 people, and the abundance of windows makes for an immersive viewing experience while traveling. Despite its bubbly looks, car writers have seemed to enjoy, or at least be intrigued by, the uniquely-designed vehicle. BBC Autos wrote, “The shape of the design study is halfway between the recently discontinued Volkswagen Kombi and an Oscar Mayer Wienermobile, but don’t be deceived by that adorable mien–the Nimbus has world-conquering potential.” So is this the all-terrain vehicle of the future? We’re not sure, but it’s not a bad place to start. Check out more photographs at Galvani’s website.