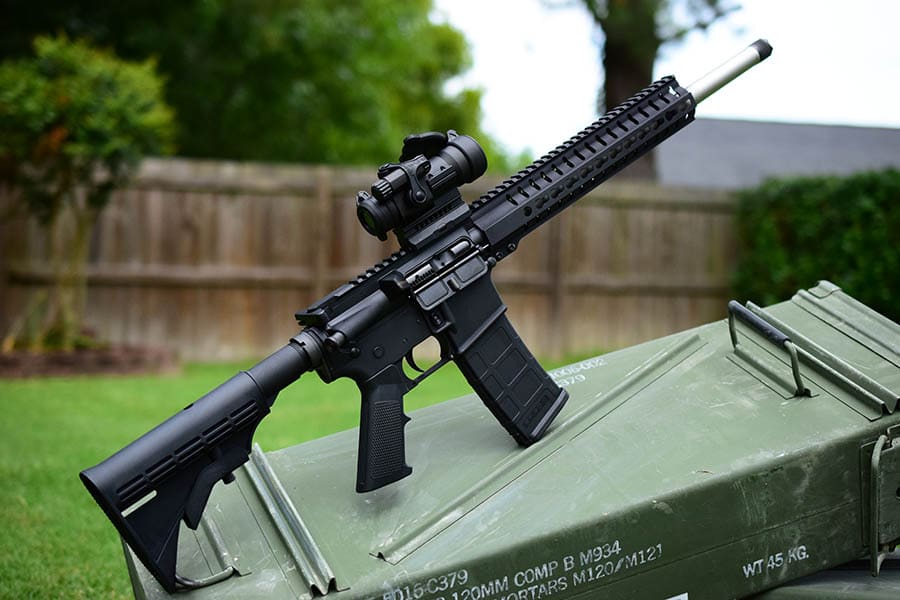 I am an EOTech guy and have been since I first replaced a no-name $20 red-dot sight with a 552 I won at a bowling pin match in the early 2000s. Back then as a fresh-faced 22-year-old, I saw the EOTech sight in every tactical video game and movie. Naturally, I assumed it must be the best weapon sight ever made. I probably would have continued believing this had it not been for a visit to SIG Sauer’s academy in New Hampshire. There I trained on a SIG 516 equipped with an Aimpoint sight and really enjoyed the optic. It would have replaced my 552 if it didn’t cost nearly twice as much. So when Aimpoint released a red dot in 2011 below the price of my beloved EOTech,  I knew I had to get my hands on it. Enter, the Aimpoint PRO.

The Aimpoint Patrol Rifle Optic is a parallax-free reflex sight that emits light from a diode as a red dot inside a housing tube against a refracting lens. The lens then superimposes the red in the tube onto the target. Basically, it simplifies the aiming components of a rifle from two iron sights to one glowing dot. This allows a shooter to aim their weapon much faster than lining up traditional iron sights. “So what?” you’re probably asking. Undoubtedly, most shooters have seen several red-dot sights on the market and are wondering what makes Aimpoint so great.

Two things: longevity and durability. Each Aimpoint sight is designed to withstand the rigors and hard use of combat. While not bulletproof, Aimpoint culminating sights are Marine-proof. They don’t lose zero when remounted or dropped. Though the most desirable feature of Aimpoint sights is their battery life. While my EOTech lasts an impressive 1,000 hours on a single battery, the Aimpoint PRO functions for over three years on a single charge. This longevity makes the PRO ideal for bug out weapons, since three batteries will give the PRO a decade of runtime.

Aimpoint developed the PRO with police carbines in mind. They wanted an all-inclusive reflex sight solution at an affordable price point most departments could sign off on. Aimpoint modifies its world-renown M2 reflex sight into the PRO by installing less efficient internal parts that reduce the battery life without sacrificing durability. The PRO also ships with a pre-installed mount that uses a knurled knob to clamp itself to a weapon’s rail. The knob uses an ingenious camming system to prevent overzealous users from stripping the mounting screw’s threads, or damaging the weapon’s rails.

The PRO’s brightness adjusts by turning dial that features six daylight settings and four nightvision ones. On the other end of the brightness adjustment tube, is a smaller cap that houses a single DL1/3 lithium battery. These retail for around $5. Not bad for 300,000 hours of run time. The cap-covered screws that adjust windage and drop do so in half MOA increment clicks. The front and rear of the sight ship with flip-up dust covers constructed of plastic. The front cover is completely opaque, but the rear one is translucent plastic, allowing the shooter to use the sight with the dust cover in place.

During my testing I mounted the Aimpoint PRO on two different weapons: A SIG 516 Carbon TS carbine, and a VEPR 12 shotgun. On the SIG, the PRO truly shined. It’s optical clarity and dot brightness made target acquisition as simple as point and shoot. I remounted the sight three times and checked zero. The point of aim did not shift a measurable amount. I then zeroed the Aimpoint PRO on my VEPR 12 shotgun. Again, it held zero perfectly and made aiming much faster than with iron sights. The VEPR’s low comb would normally make aiming the PRO require the shooter to use a chin-weld to obtain proper sight alignment. Thankfully, the VEPR features a special raised cheek pad. Though this raises an important point. Shooter looking to mount the PRO on a side rail-equipped AKM pattern weapon should invest in some method of raising that weapon’s comb height.

With an MSRP of $453, the Aimpoint PRO is not a cheap optic. Shooters looking to find the cheapest red dot sight should look elsewhere, the PRO isn’t designed for them. The PRO is meant for shooters who are sick of buying cheap sights that break after a few hours of hard use and burn through their batteries in a handful of hours. Whether they’re looking for an optic for a patrol rifle, bug out gun or competition weapon, the Aimpoint PRO will be a solid investment shooters won’t regret.