What do those statements bring to mind?

If you answered, ‘A deranged or troubled student/gunman killed a student and then shot an officer who was responding to the scene, in another example of the United States’ continuing out of control gun violence epidemic,’ congratulations, that is exactly what that headline is meant to make you envision. It even vaguely resembles the truth… from a certain point of view.

If you answered that a student with a gun holed himself up in the bathroom, shot at the cops who entered the bathroom, injured one officer, and was then killed by the police returning fire… well, you actually read the story and have a grasp of what happened.

The police responded to a call of someone at the school with a gun. It turned out to be a student and the student barricaded themselves in a restroom. Police made the decision to enter the bathroom and the student shot at them, injuring one. Officers fired back, the student died.

Is it tragic the student was killed? Yes, I doubt to the highest degree the young man was an ‘evil extremist’ or ‘deserved’ to die in a gunfight with police. But the thing about getting into a gunfight with police, which you get into by shooting at police or making the police believe you are going to shoot at them, is that the risk of death is much higher than not shooting at the police.

Cops want everyone to walk clear of an incident uninjured, but their priorities start with their safety and then bystander safety. Suspect safety comes a very different and distant last on their priority list, because the person or people who are the active threat get to be last on that list. Letting that threat hurt or be in significant position to hurt an officer, victim, or bystander is not something LE is going to willing allow in order to not harm the actively threatening individual(s). They would be woefully negligent of their own safety and the communities safety if the did not stack their priorities in that manner, it simply cannot happen that way and sometimes that means things end in injury or death when we don’t want them too. Were an officer to act otherwise and it result in other injuries or deaths they would be woefully negligent, probably criminally negligent, in the performance of their duties.

Back to the headline

So divesting ourselves from a tragic situation all on its own, without embellishment in the slightest, of a troubled student bringing a firearm to the school, and dying after shooting at responding officers after injuring one officer. Why do we need…

… as a headline where everything stated is ‘true’ in a technical sense but cloaks the facts of the story, that the student who died was the aggressor and directly opposed to the officer who was injured? Why would a journalist write it this way and deliberately misconstrue the event, knowing most consumers do not read beyond that headline?

Tragedy in high school: Student killed in gunfire exchange with police after firing from a bathroom at responding officers, one officer injured.

Would that not be accurate, representative of the event, and convey the tragic nature of the occurrence?

But… it places blame upon the student, the one who brought a gun to school in the first place, and students taking culpability for their actions hurts the narrative.

A student, a kid, is always going to be a sympathetic character in a narrative like this. Even if the attack was malicious and deliberate, which does not appear to be the case here, a young person will always garner a measure of humanism and sympathy that adults do not. The student could have been bullied, had a tragic home life, or any number of other factors that make a violent outburst more understandable. We are genetically geared to protect our young, feeling sympathy for them is a core element of humanity. This is true even if the harmful element is the child themselves, even if it is one mature enough to make such harmful decisions in cognizance.

But a “suicide by cop” narrative, which this may be, or some other tragic but limited scope event does not advance the “epidemic” gun violence narrative… so gun control shills massage the headline. Not to provide more context and accuracy, but to obfuscate and generate an inaccurate but useful emotional response.

Headlines like this play upon that ignorance and fuel it. 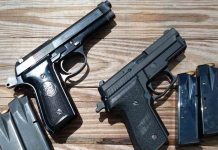