I’ve always thought tomahawks were kind of cool. Maybe it’s because I was ten when the Patriot came out. Maybe it’s because they have a rich history. Maybe, it’s just because they’re cool. I never got into the world of the tactical tomahawk. Many of my peers carried them and used them rather successfully as tools in rural Afghanistan. However, I liked the more traditional appearance of the tomahawk. Kinda like the Nobo. 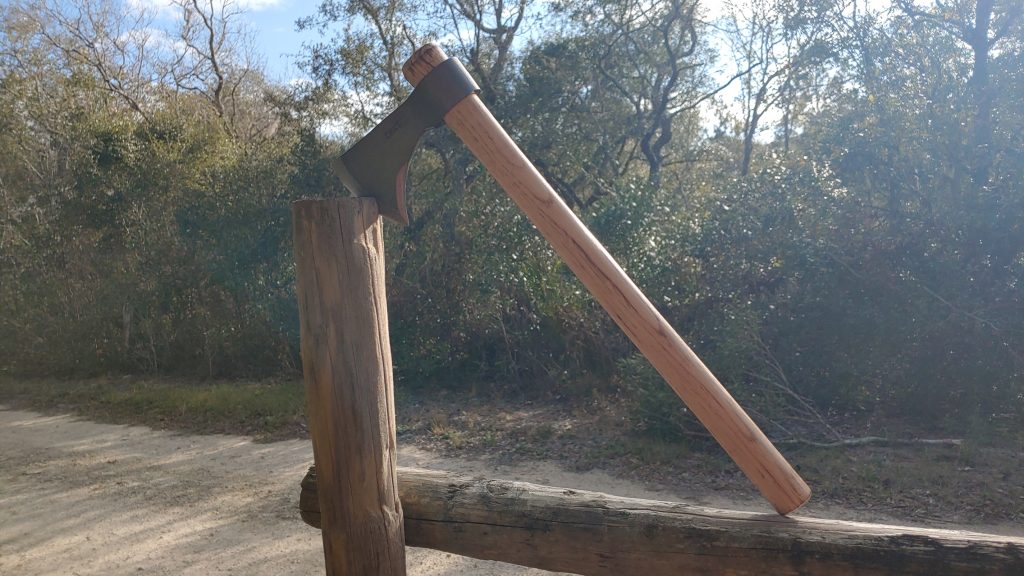 Something one of Roger’s Rangers would have carried, not something an operator would carry. I never put a lot of effort into finding one, but as Christmas drifted around, the CRKT Nobo caught my eye. Unlike most modern tomahawks, it’s not tactical. It’s like the Fudd version of a tomahawk.

Yep, no fancy nylons, polymers, or full tang metal designs. It’s a long wooden handle, and that’s it! At first glance, I was reminded of the film the Patriot. Don’t get me wrong, Mel’s is a fair bit different than mine, but the aesthetic of wood on metal captured my eye. The single-sided ax head didn’t pack a hammer, spike, or anything else opposite the blade. 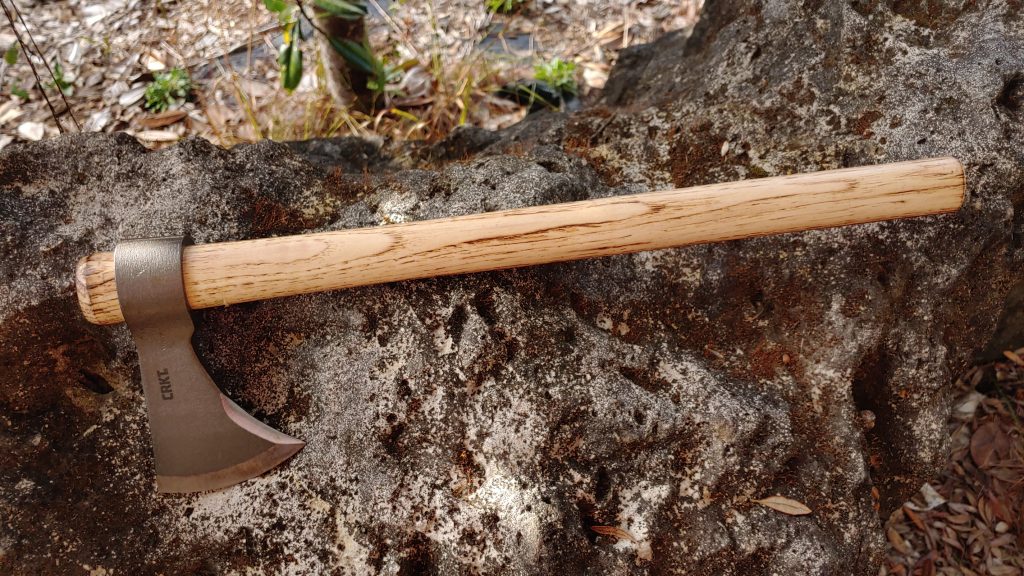 The Woods Nobo is as simple as simple gets in its design. CRKT teamed up with Ryan Johnson of RMJ Tactical to design the Woods Nobo. The handle is Tennesee Hickory, and the blade’s made from 1055 carbon steel. The combination presents a cool, classic, and affordable tomahawk design.

The handle is quite long, and it gives plenty of room for two-handed swings. I’m purchasing a tool I plan to enjoy using as much as I enjoy looking at. The handle measures out to over 19 inches, and that’s plenty for most uses. It keeps it a little shorter than a short ax but longer than most tomahawks. 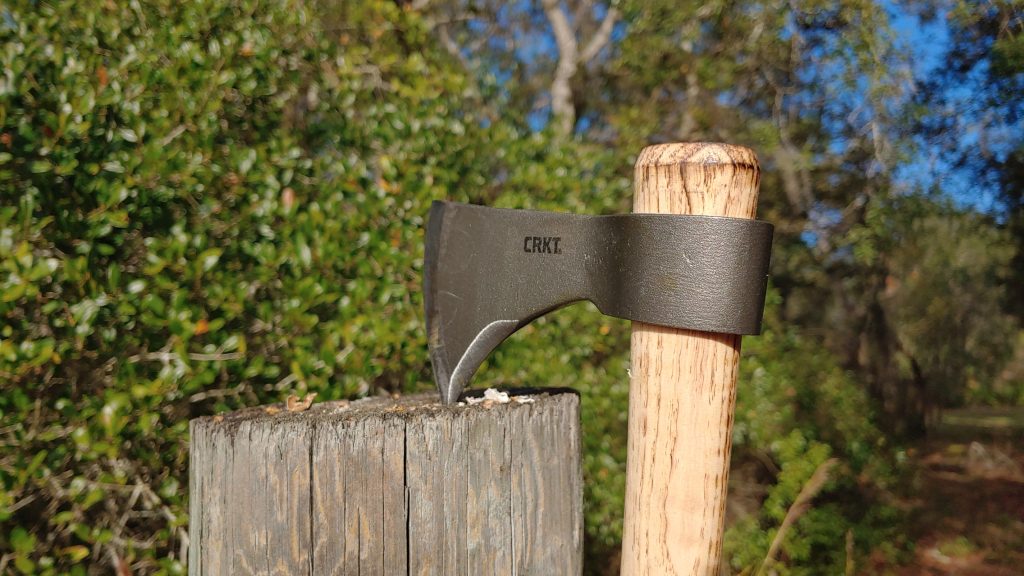 1055 carbon steel isn’t much to brag about, but it’s sufficient for tomahawk tasks. It’s budget-priced steel that is known more for its durability and impact resistance more than its insanely sharp edges. Valuing impact resistance with a tomahawk makes a lot of sense.

Setting Up the Nobo

The Nobo comes with a handle separate from the head. Installing the head on the handle takes no time. Slide it down, align it, and then beat the top of the handle onto something hard to seat the handle. Adding an ax head wedge might ensure it never moves, but I didn’t do so.

The blade is 3.47 inches, and in total, the whole setup weighs about 1.5 pounds. The edge is plain, and the beard of the ax has a sharpened edge as well. It does come with a relatively dull blade. So I took a puck to it and learned how to sharpen a tomahawk as best I could. I went slow but ended up doing a half-decent job.

It’s fairly easy to sharpen, and the angle is evident. I took my name to ensure I counted strokes and repeated them, and was pleased with my work.

By bringing the heat, I mean doing yard work. Until the redcoats invade, I don’t think I’ll be fighting a guerilla war, so my enemies are the constant encroaching jungle that is the Florida rain forest. Thus, I was thrust into a war of greenery. I dished out attack after attack on small turkey oaks, on limbs hanging too low, and against palmettos that wouldn’t stop! 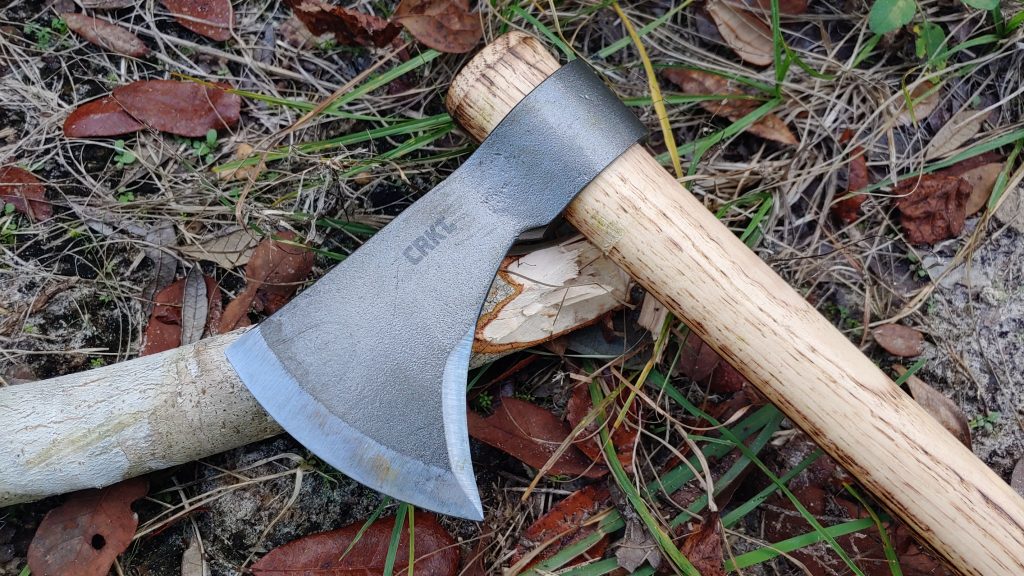 The ability to use two hands became quite handy at some thicker small trees. More hands make less work, and less work equals less fatigue. I chewed through some thicket and emerged with nothing more than a good sweat. The round handle of the Nobo is quite comfortable and allows you to get a good no-slip grip.

I might carve some checkering to improve the grip. Winter in Florida isn’t like most winters, but my hands weren’t drenched with sweat as they’d be in Florida summer. The Tenessee hickory handle is a blank canvas for you to design and change up as you see fit. I didn’t develop any hot spots, blisters, or pain after a few hours of chopping, hauling, and burning. The blade on the beard of the ax isn’t a downside, but I don’t see much use for it. Unless I need to hook a guy’s shield or board a ship. Luckily if you choke up on the Nobo blade for more precise cuts, it won’t touch your hand or get in the way.

The CRKT Nobo Tomahawk satisfies my need to grip a wooden handle ax and to deliver chopping blows on both redcoats and palmetto bushes. It’s a budget hawk that won’t necessarily be innovative. However, it’s a competent tool that brings an old-school cool flavor to the market.