I thought I was going to make my Thursday SHOT rounds be about hunting. But I ended up getting all wrapped up in trying to find women’s camo to report on or review.

I need to rant a minute  about camo in “plus sizes” – or rather the lack of it.  Virtually every camo company I have checked out here is lacking in larger women’s sizes, or lacking in women’s camo period.

I eagerly checked out the women’s line in an (unnamed) camo company I saw on Tuesday, only to be disappointed that the company apparently thinks that female hunters don’t come in any sizes bigger than 14. I discussed with the rep (and she agreed with me) that this was unrealistic given what the average size of U.S. women really is. Last I read, the average American woman was now size 16-18.

There are a handful of companies that make camo “for women”, but what I have found so far is that they are still not sized realistically. One “women’s” company line had a rise that was so short that crouching down presented the gluteal cleft to the world. Plumber’s butt isn’t something I want to happen in the snow during deer season – sorry.

The vast majority of “women’s camo” that I have seen still only goes up to a size 14. OR it goes to “extra-large”  – but for many of them that is still only the equivalent of a 14.

That leaves alone my additional complaint that every attempt at camo for women seems to need cute pink or purple (or now teal) stitching and accents on it. Do I want the turkeys I am hunting (who have very good eyesight) to admire my cute pink accents?

One women’s camo line here at SHOT (which shall also go unnamed) tried to explain away the lack of upper sizes by saying “But look how stretchy the fabric is”. This merely demonstrates the industry-wide fundamental lack of understanding of the problem.

The icing on the cake was yet another company (first name rhymes with “blunder” ) whose women’s line – if the tag on the female mannequin was to be believed – actually went to size 20! I was excited! The booth was not busy, but it was like pulling teeth to get any of the older male reps to recognize my existence. Once that finally happened, I introduced myself and said I was a writer interested in their women’s camo line, and asked if they had any brochures or press kits that I could go over. The rather curt reply was “No, but you can look online.” Wow. Just. Wow. So much for promoting your product, guys. Why are you here again?

Your friendly writer here is a size 16-18. Middle-age/ menopausal spread is a real thing. IF the average American woman is a 16-18 then I am not some land-whale – I am AVERAGE. So what is the problem?

The press conferences from NSSF and NWTF this week reinforced that we NEED to bring more hunters and shooters into the fold. Sooooo, we want to attract more women hunters – in fact we NEED to do this in order to keep the tradition and conservation model alive.

Many women are not runway model sizes. Yet camo companies are refusing to attempt to clothe these newly-recruited women properly. How does that make sense? I know that it becomes a chicken and egg thing – companies don’t see women hunters, so they don’t think there is a market for reasonably priced, large-enough sized women’s camo.

But if we don’t demand it – will they EVER make it? 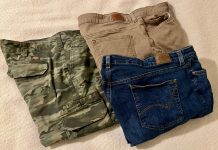