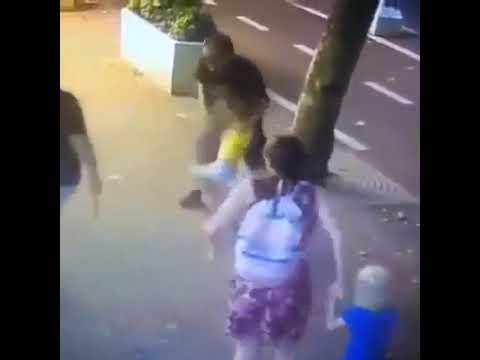 EDIT: The video appears to have been taken down due to graphic content.

A 51 year old woman stabbed a 3 year old in the face for no discernable reason. This random horrific attack happened in Georgia (the country, not the state) and just further illustrates that some people are just… wrong. Evil exists and it looks like this.

The woman then calmly tries to walk away. Turns around and tries to stab the boy again before going after his sister. Their father snatches her out of the way and uses his sunglasses as a defensive tool, something to give him a little more distance between him, his daughter, and this knife wielding shit beast.

He passes his daughter off to their mother and tries to chase down the woman who literally just stabbed his son in the face but she turns and menaces him with the knife before she flees. The young boy was stabbed through the cheek and nose, moderately severe facial injuries, but lucky for him his eyes and neck were not slashed.

She was later apprehended by authorities but no motive is known as to why she stabbed a strangers three year old in the face twice.

This is why we carry. The father and mother are both physically smaller than this monster, she’s already demonstrated she gives literally no shits because she brazenly stabbed a child in the face. Dad tried to pursue but had nothing to out class a big woman with a knife. She could have gone after him, his wife and kids, or anyone else on the street and he would have been at a potentially lethal disadvantage.

Carry for your and your family’s protection. Have a plan.