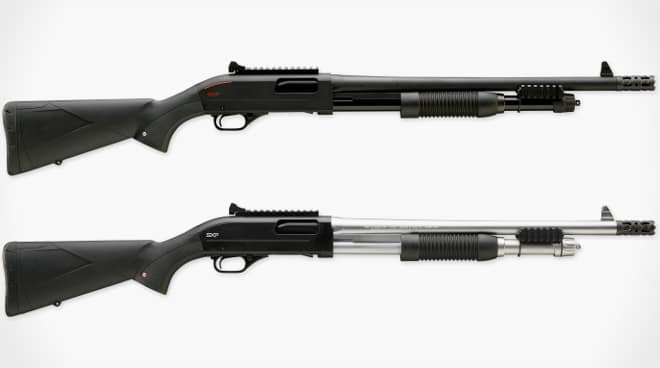 Winchester Repeating Arms is continuing to expand their Super X Pump or SXP series of shotguns for 2015 with two new Defender models fitting for personal protection and law enforcement. They’re adding two versions, a standard model and a Marine edition built to withstand the elements.

The new Ultimate Defender and Ultimate Marine Defender are ready to go with a complete compliment of defensive shotgun features like rifle-style ghost ring sights, a drilled and tapped receiver with a pre-installed rail for red dots and other shotgun optics, sling swivel studs on the stock and magazine cap and a standoff extended Invector-Plus door-breaching choke tube.

Both are chambered for 3-inch 12-gauge shot shells, have 18-inch black chrome-lined barrels and chambers and lightweight alloy aluminum receivers. They have polymer composite stocks and forends with a matte black finish on the Ultimate Defender. The Marine version is two-tone with a hard chrome finish on the barrel and magazine tube.

At 7.5 pounds each, with 5-round magazines, these are compact, maneuverable shotguns ideal for home protection or duty. Like other SXP shotguns, they use Winchester’s inertia-assisted action which unlocks automatically with each shot. This reduces the likelihood of short-shucking the action and promotes extraction, ultimately improving on the pump action’s time-tested reliability.

Additionally they have .742-inch back-bored barrels to provide a good seal around the shot wad for higher muzzle velocities without constricting the bore too quickly, minimizing pellet deformation to promote tighter shot patterning.

These are affordable shotguns priced at $499 for the Ultimate Defender and just $539 for the Marine Ultimate Defender, a tiny price premium for the added chrome finish. That of course is suggested pricing and both should retail in the mid $400 range.