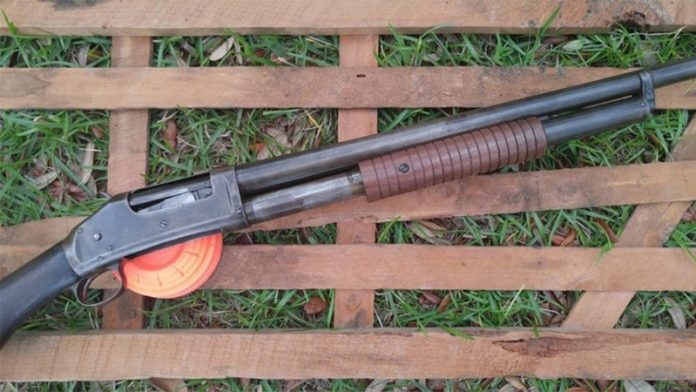 The Winchester 1897 is one of the more distinctive historical shotguns out there. It’s been romanticized through movies and video games but its name is still one that will escape a lot of people. The 1897 was a big star beside 1911 in the film, the Wild Bunch. More recently it was the shotgun of choice for Llewelyn Moss as he battled Anton Chigurh in No Country for Old Men. It’s a shotgun that catches your eye. It’s not as plain as a Remington or Mossberg but isn’t over the top like a Spas 12 or Saiga for some. It’s a more civilized weapon for a more polite society.

The Winchester 1897 was the first commercially viable and successful pump action shotgun. It was designed by John Browning and was an improvement on his model 1893 shotgun. Browning had long considered the pump action to be the future of shotgun technology. His first shotgun repeater was the model 1887. John Browning produced the 1887 at the behest of Winchester under some protest. The heads of Winchester insisted they were a lever action company, and wanted a lever action shotgun. Browning designed the Model 1887, but wouldn’t leave the idea of his ‘slide action’ shotgun alone. Eventually, Winchester listened and he began designing the model 1893.

The Winchester 1897 was built to be stronger and more durable than the standard 1893. The 1893 was designed to be used with black powder, and could not safely fire smokeless powder shotgun shells. The Winchester 1897 was more robust to utilize the more powerful smokeless powder that was growing in popularity. The shotgun first premiered in Winchester’s November 1897 calendar in 12 and 16 gauge. The next year a takedown variant of the Win 1897 was produced. This takedown model made it possible to quickly remove the barrel of the shotgun. These days not a single shotgun is designed without this feature.

The first thing that catches your eye when looking at the Winchester 1897 is the external hammer. Like a single action revolver the hammer must be cocked to the rear for the shotgun to fire. There is no manual safety for this shotgun. To safely carry this shotgun in condition 1 you have to carefully lower the hammer into the half cock position. Drop safe firearms weren’t a reality in 1897.

The shotgun does not have a trigger disconnector. This allows the shooter to hold down the trigger and the shotgun will fire every time the system comes back into battery. This is known as slam firing and makes rapid fire very easy. This feature would make it a brutal military weapon down the road.

A Life of Service

The Model 97 found its way across the United States in the hands of police forces and remained there for decades. It became the shotgun of choice for a dying breed of outlaw, as well as the lawmen hunting them down. The shotgun was used by American Express messengers transporting valuables through lawless areas. The pump action nature and 5 + 1 capacity of the Model 97 gave armed men an unparalleled amount of on deck firepower for the time period. The Model 97 soon found its way to the United States Army.

The shotgun itself was svelte and lightweight for the time period, and incredibly handy when compared to the issued battle rifles of the American soldier. When World War 1 came around the combat quickly developed into brutal trench warfare. Soldiers fighting in the trenches were often doing so in extreme close-quarters conditions.

The army modified the Winchester 1897 for combat with a heat shield and bayonet mount for the 1917 bayonet. The barrel was 20 inches inch and the 5+1 capacity made it an incredibly effective trench broom.

Trench warfare is the perfect place for the shotgun and the German’s quickly learned just how fierce the Winchester 1897 was. The slam fire and buckshot made it effective in the trenches far beyond any bolt action rifle. When equipped with a bayonet the Winchester 1897 was a fearsome opponent to face. It fired faster than any bolt action rifle, and the use of buckshot made first shots into kill shots.

The Winchester 1897 gained such a reputation that the Kaiser of Germany, and the German government, petitioned to have the shotgun banned from warfare. They claimed it was illegal under the laws of war outlined in the Hague because it caused “Unnecessary suffering.” To put this in perspective this was the war where nerve and mustard gas were being used. This is a war where tanks, flame throwers, machine guns, and shrapnel were being put to devastating effect in a major war for the first time.

The Americans rejected the claim, and the Kaiser ordered any American prisoner with a shotgun be executed. In return, Captain Jack Pershing ordered any German with a saw blade knife or flamethrower be executed. There is a rumor that stated Captain Pershing also requested 10,000 more shotguns to irritate the Kaiser as well, but rumors are rumors.

Another legend revolves around Sergeant Fred Lloyd. Sergeant Lloyd, armed with a Model 97, cleared an entire village of Germans. He reportedly killed 30 before collapsing in exhaustion. I can’t find any official Army documents on this event, and only a story by Bo Barbour in an article on Army Shotguns. It has been quoted numerous times in the Winchester Model 1897 mythos. 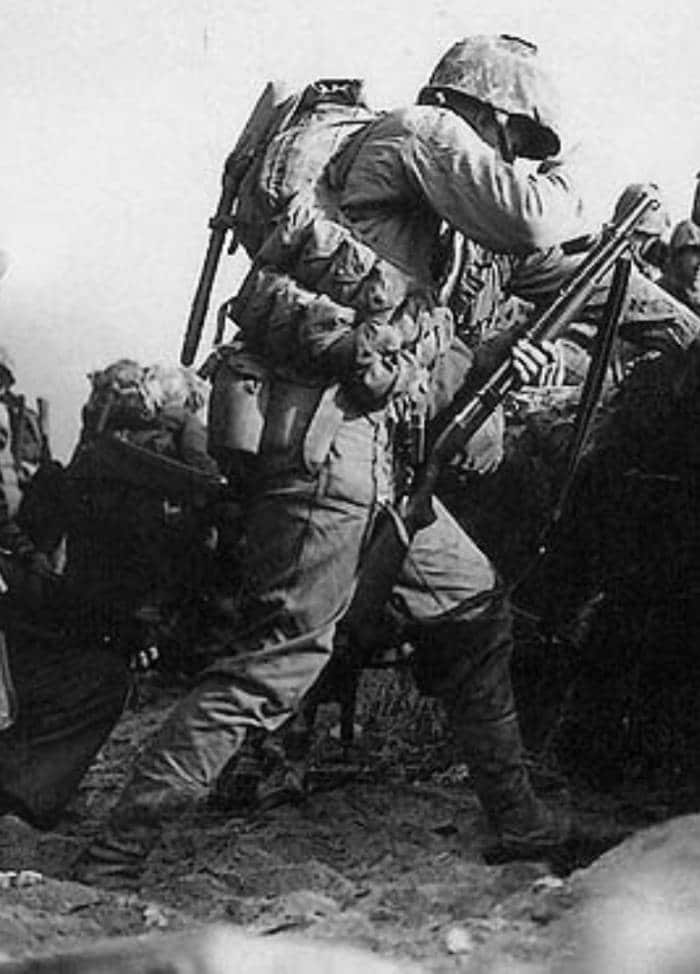 The Winchester 1897 didn’t end its service in WW1. It served up until Vietnam in limited roles, and alongside other shotguns like the Model 12, and Ithaca 37. Winchester ended production of the Model 97 in 1957. The shotgun itself is a collector’s item these days. They vary greatly in price based on condition, with military models being the most desirable.

I can’t do a full review on this shotgun, even though I own one. I refuse to put it through any kind of durability or reliability test. I don’t have it in me to torture a shotgun made in 1902. I can comment on its handling though. Let me tell you, it’s sweet. The pump glides backward like it’s on ball bearings. The trigger has almost zero grit or creep. It’s just a slight wall, then a break. 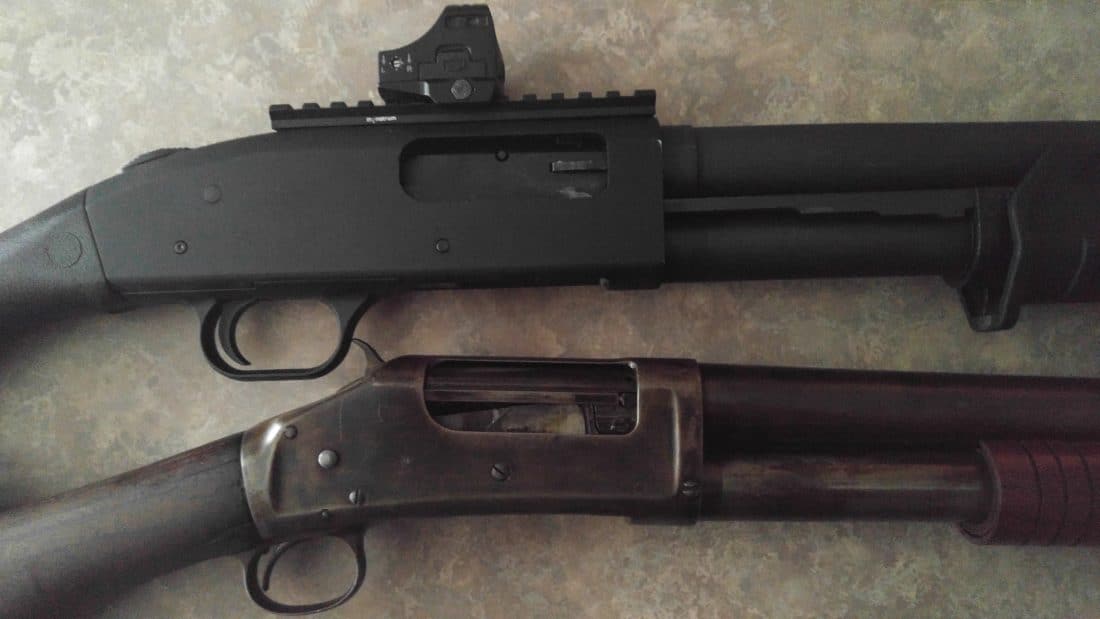 Slam firing is extremely fun, but something I’ve only done twice with light birdshot loads. I mean super light loads. My 1897 is a functional shooter, but I prefer to look at it, respect its history, and show it off when the topic of antiques comes up. To this day the design holds up. It doesn’t feel outdated, and if this shotgun wasn’t a hundred years old I’d happily keep it by my bed for home security. The fact that it is a hundred years old and still functional is a testament to its design.

The Winchester 1897 was on my gun bucket list for a long time. Now that I have one I can really appreciate the genius of John Moses Browning. It’s interesting just how far ahead of the curve he was on shotgun design. His slide action shotgun has influenced every pump action shotgun that followed. From the deer stand to the battlefield the Model 97 served cowboys, policemen, hunters, soliders and outlaws. The Winchester 1897 is a true American classic.