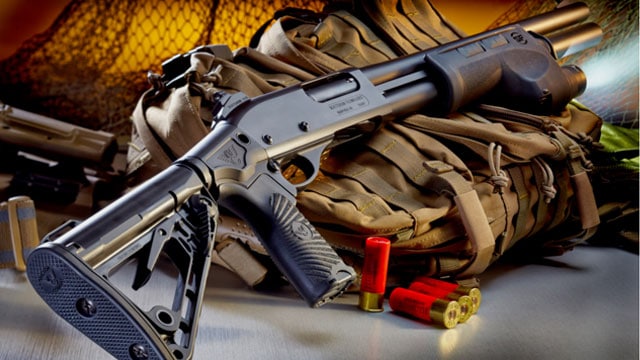 Known for their upscale 1911 pistols, Wilson stayed true to its classic-gun ways, updating this pump-action model in an age when many are turning to semi-autos. At the same time, the company stepped way out of its in-house production box to put this one together.

Features from stern to stem include a ramp-style front sight with fiber optic insert atop an 18.4-inch cylinder bore barrel, with a three-inch magnum chamber.

Wilson outfitted the shotgun with SureFire’s tactical fore-end with an integral 200-600 lumen light.

The magazine tube holds six rounds, and has an extra-power, heavy duty spring. Feeding is also complemented by a high-visibility, non-binding follower. There’s a rigid sling mount on the mag tube.

The whole package is coated in Armor-Tuff finish. WC completes the outfit with a 44-inch nylon case for $73.95.

Wilson Combat has built a reputation building 1911s from scratch.  The Combat CQB, a collection of mostly outsourced components, is quite a divergence from that approach.  The company’s flexibility appears to have paid off in this offering of a purpose-built 870, chock-full of useful features.

At $1,695, the Wilson Combat CQB Shotgun is priced competitively when compared to piecing together a combat shotgun—and saves invaluable time.

You’ll just have to buy your own sling.