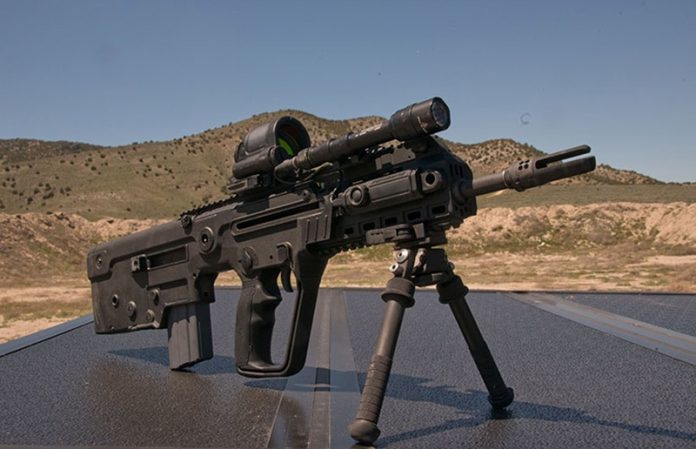 Since its introduction to the U.S. market I have tested, retested, rearranged then again retested the Israeli Tavor rifle. It’s been to several schools — some practical, others more about the tactic of the day.

I commonly used it just to be contrary to the most vocal AR guru at the time. It was fun to watch AR after AR go down during hard training while the Tavor just kept on working. Experts and pundits kept telling me it would break. Well, it’s still running after well over 20,000 rounds — not bad for something the social media experts, even a few with real credentials, said would be a “fad” that would never work.

The Tavor does have its issues, mostly revolving around the handguard, but the aftermarket kicked in and dealt with many of them. Never enough to please the naysayers, it became very handy for those willing to look outside the AR box.

But when the Tavor X-95 was introduced it looked to have some serious changes designed to deal with many of the perceived shortcomings.

IWI set out to improve on the ergonomics of the Tavor, especially for the U.S. market.

While not visible from the outside, the trigger pack may be the most useful change. A factory pull from 5 to 6 pounds is about half that of the previous version. It makes a huge difference when it comes to accuracy and speed on the trigger without compromising reliability.

The new handguard provides a flat surface with removable panels revealing rails at 3, 6 and 9 o’clock. Left in place, you get a smooth surface that is flat all the way back to the grip guard and longer than the SAR.

Remove the panels and you can slim it up even more. It allows you to mount a light or bi-pod without the need for a new handguard or rail. Moving the charging handle back keeps things uncluttered and unobstructed. Quick Disconnect sling cups sit on either side of the stock as well as the front of the handguard and just behind the charging handle allowing you to switch between them.

You can also swap the Tavor-style grip with one that uses a standard trigger guard. While the bolt release is in the same place it is smaller and lower profile. Magazines are now released using buttons placed similarly to an AR on either side of the grip. Back-up sights remain hidden in the top rail for deployment as needed.

The 16½-inch cold hammer forged CrMoV 1:7 twist barrel is capped with an A2 style flash hider. It retains the long-stroke gas piston system and AR magazine compatibility. Overall length is the same, but the stock area is trimmed a bit providing a flatter feel that seems to work better with a plate carrier.

You can still make it a left side eject and right side charging if needed, making it one of the most ambidextrous out of the box carbines you can get. It ships in a box with one 30-round Gen 3 PMAG.

I wanted to keep this test purely carbine-like, so no optics other than for the obligatory groups. My preferred configuration keeps it simple and as light as possible. My Trijicon SRS red-dot sight was mounted so as not to obstruct the factory backup iron sights. SureFire’s Warcomp replaced the factory flash hider for suppressor use. You can time the warcomp for left, right or neutral shooting, this was timed neutral. Just make sure and use the SureFire-supplied spacer that’s designed to provide a bit more shoulder for the actual shims.

I also added a new Geissele Super Sabra trigger pack. While the factory trigger is much better than the SAR, it is still not nearly as crisp as the Geissele. Other than some alterations to the housing, they are the same. My last addition was a Blue Force Vickers sling using QD sling swivels.

To make an honest comparison, I started range tests with the factory trigger. We used Leupold’s Mark 6 3-18X scope for groups at 100 yards. Group testing at 50 and 25 yards used the Trijicon SRS. After about 100 rounds my groups started to tighten up. It’s really all about getting a solid position, and that just takes some time. Results are best when the Tavor is locked in place.

My best group with the factory trigger came using some 600-grain Vmax from HPR ammunition measuring 1.3 inches. It was consistent and soft-shooting. Another accurate round was the Nosler Defense 64-grain Soft Point. Interestingly it was also the most accurate out of the Tavor SAR. Both rifles seemed to be the most consistently accurate with bullets in the 60- to 64-grain range.

Black Hills 69-grain TMK grouped at 1.6 inches — the 77 grain came in at 1¾ inches. The best in the heavies was the Hornady 75-grain Superformance 5.56mm NATO. Moving to the Geissele essentially tightened everything up by about ¼ inches. I was able to produce a couple 1-inch groups with the 60-grain Vmax load and the 69-grain TMK from Black Hills tightened up to 1.3 inches.

My standard zero for an RDS equipped rifle is 50 yards, so the Trijicon SRS was zeroed using the 60-grain VMAX from HPR — the most accurate overall. Shooting from an unsupported prone in the dirt we kept 10-shot groups at this range inside 2 inches shooting pretty quickly. Move up to 25 yards and it was similar, maybe a bit tighter. Using holds on this zero it was easy getting hits on 12-inch steel out to 300 yards. Loaded with Black Hills 69-grain TMK it was very consistent.

Working the square range, the X-95 really shined. The magazine release was positive with all but one magazine ejecting cleanly from the magwell. Every other magazine ran with zero issues, including Brownell’s GI 20- and 30-rounders, Gen 2 and 3 PMAGS, my old IWI magazines as well as Lancers.

Using the forward magazine release was intuitive and never inadvertently activated by gear or anything else. Just like an AR it is better to rest your trigger finger when not in use above the release, but that would seem to be common sense.

Surefire’s Warcomp kept things steady and the Geissle allowed for some very fast split times. Take up is a bit longer than an AR, but it was as fast as any of my rifles using similar Geissele triggers.

Unlike my SAR, the X-95 worked very well with most of the ammunition when suppressed using the SureFire SOCOM556-RC2. While there was no impact shift taking it on and off, there was a consistent 3-inch drop between suppressed and unsuppressed across most all ammunition. It functioned fine with no observable change in brass ejection patterns.

All of the ergonomic changes enhanced my ability to use the X-95. Charging handle placement is makes manipulation fast. There was no interference with the handguard and plenty of room for large hands. Magazine changes were very fast using the bolt release and new magazine release placement.

Just like the SAR, it worked better just keeping it in the pocket if you are trying to be fast. Turning it sideways was possible without the plate carrier. The new sling attachments allowed me to carry it using a traditional two point holding it tight and close to my chest.

Keeping the bottom panel on the handguard allowed for stable positions in barricades and even in some tree limbs. Remove it and my Atlas Bi-pod mounted right up and it is very stable from prone. Even with the bi-pod attached, it was possible to work in all kinds of positions around the truck that are difficult even with a short AR. As expected, it is a very handy rifle.

Not sure it will surprise anyone given my affinity for the SAR, but I really like this rifle. It allows me to keep a short rifle that takes full advantage of the 5.56mm cartridge. It runs just like a 10-inch AR without the need for paperwork. It proved reliable, plenty accurate and soft shooting even when suppressed. If your customers are already Tavor fans, they’ll love the X-95.

For those looking to make the jump without loosing most of the AR-type controls, this is probably your customers’ best bet. Just like the SAR, the X-95 is going to see a ton of use.