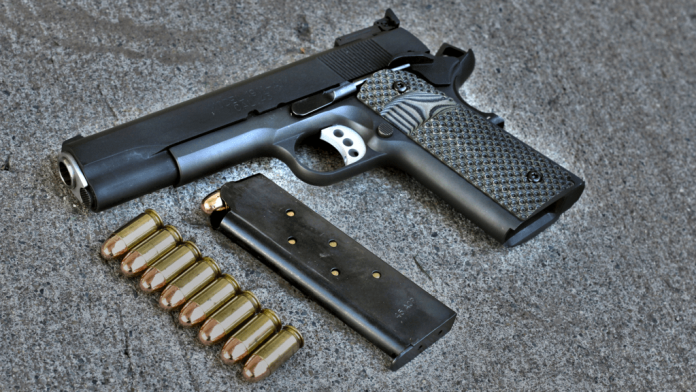 The 1911 has been around for 100 plus years at this point. The 1911 is an all metal handgun that is completely overweight by today’s standards. She holds 7+1 or in modern magazines 8+1. So roughly half of what a modern .45 ACP carries. A gun ought to retire after a while and yet Browning’s design continues to impress. So why is that?

It comes down to a multitude of factors, but John Browning understood how to design a gun that pointed well, felt good, shot good and was reliable. The 1911 is often imitated but seldom exceeded. In the following section we’re going to take a moment to talk about what makes this gun a winner even to this day.

The grip angle on the 1911 feels natural, and for me leads to less stress on my wrist when shooting during long periods of time. Modern handguns have moved to a more canted / aggressive grip to help control recoil, however I’ve found that comfort aids me much more in tight, fast groups than it does in an aggressive grip angle (looking at you Glock)

The recoil impulse on the 1911 is gentle and feels sluggish which aids in tracking the sights during rapid fire. I’ve found the 1911 to be perhaps one of the smoothest and most pleasurable full size .45 ACP handguns to fire. Other weapons exceed it, but not when considering the other factors.

Everything I’ve listed above is my opinion of-course. The 1911 is becoming dated, but despite that I think it’s important that we look at this fine piece of engineering and appreciate how forward thinking it was for its time. So next time you’re hitting the range with you custom optic equipped pistol, take a moment and pull the old 1911 out and see how she compares. I think you’ll be surprised.