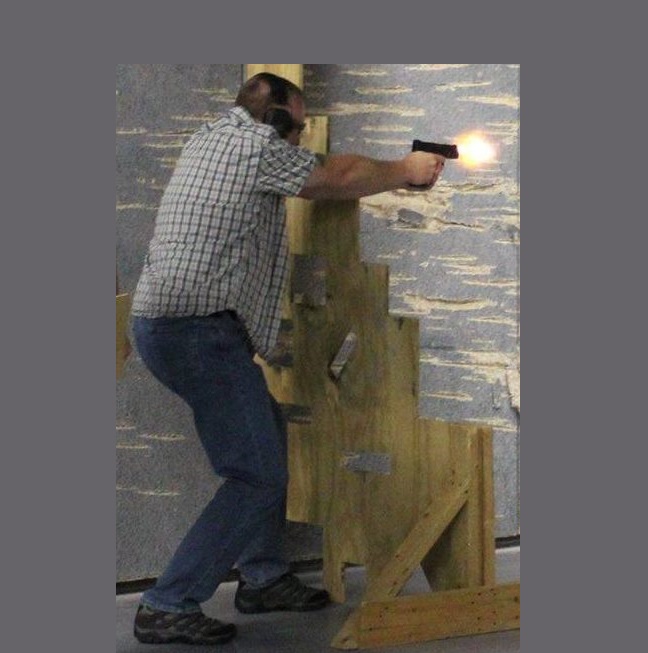 A short twenty years ago I was preparing to exit the Army after my second enlistment.  I was leaving with active qualifications for the M9 Pistol and M16 rifle.  I felt confident that my weapons training would serve me well in civilian life.  I rested on my laurels confident in my abilities.  Shortly thereafter I eventually obtained my concealed carry permit.

Fast forward to last year.  I was finally in a position in my personal and professional life that afforded me the opportunity to take some updated training.  I focused on defensive pistol courses.  It was amazing at how vastly different the tactics have changed from the cold war era.  I quickly realized that not only did I need to expand my knowledge through training, but also find a way to practice the techniques and fundamentals on a regular basis.

Over the previous couple of years I had enjoyed shows such as Shooting USA.  Some of their episodes had featured the competitive shooting sports like IDPA, USPSA, Bianci Cup and 3 gun to name a few. All of these disciplines looked fun on the surface.  However, I knew from previous sports adventures that the featured top competitors make things look easier than they are.  I admittedly was intimidated and reluctant to start exploring the sport at first.  After the training, I had a renewed interest in competing in the shooting sports.  They looked like a perfect avenue to practice the fundamentals. I began looking around and found that locally, the disciplines with the most offerings in the area were IDPA and USPSA.  I decided to focus on them.

After some research, I decided the International Defensive Pistol Association (IDPA) was the place for me to start.  This branch of the shooting sports has its roots in the defensive employment of handguns.  The rules focus on the use of cover when engaging targets, reloading from behind cover, and a tactical mindset.  While they do have the “race” divisions, they focus on everyday carry (EDC) options for equipment from holsters to flashlights.  IDPA allows for a new shooter to show up at a local match with a normal concealed carry setup and be able to compete with minimal additional investment.

This was perfect for me.  I did not have a large budget to purchase new equipment.  I arrived at my first match with a double magazine pouch, stock pistol with holster and 3 magazines plus ammunition.  There was a small learning curve when it came to what they considered proper use of cover and target engagement.  This was easily picked up upon thanks to the more than helpful range and safety officers.  Once the first match was under my belt and the initial jitters had subsided, I found this discipline to be a great opportunity.  The focus on cover, target priorities and other fundamental aspects of defensive firearms uses were seen.  A few local competitions later I was able to better focus on techniques learned in training.  I worked on tactics like slicing the pie, engaging targets as they were seen and scoring more accurate hits.

In an IDPA match, the shooters are given a scenario based course of fire (COF).  Targets, starting and ending positions are specified.  Watching my fellow competitors, it was clear that with a few exceptions, most competitors will shoot the match in nearly the same fashion.  However, there is a little room for an individual approach to the scenario or situation.

IDPA does have a relatively large rule book.  This is a turn off for some competitors.  Since I was focused on the defensive aspect, I looked at this as a positive.  Real life is full of laws (rules) that we must be ever vigilant in adhering to.  Laws are subject to change through legislation and from one jurisdiction to the next.  We must be ever cognoscente of our surroundings and what we are permitted to do when acting defensively.  In the end, if I am able to follow the extensive rule book and eliminate the “procedural errors” then I feel I it can help me translate that into being able to follow the laws that govern our defensive handgun uses.

I then mixed in a few United States Practical Shooting Association (USPSA) competitions.  These matches are less rule intensive and more free form.  There are similar rules governing equipment, but the courses of fire and scenarios are less strict in their engagement.  Target engagement can be whenever the shooter feels most confident they will score an accurate shot.  More than 3 magazines can be carried allowing for more reloads and ammo. As opposed to IDPA where most competitors will shoot a COF almost identically, USPSA will have a wide variety in how a particular stage will be engaged.  I like to look at this discipline as a better reflection of how a real world scenario is more dynamic.  I have seen in myself that I will go into a COF with a given plan and at some point I will need to adapt that plan on the fly.  Maybe I was planning a reload when moving to the next shooting position but a makeup shot throws off the round count.  I might then decide to sideslip and engage a long range target that was planned for a closer shot.

With either discipline, both allow the shooter to practice various aspects of defensive shooting that can’t be done on a traditional range.  Many shooters like myself have limited access to outdoor ranges that allow movement.  We are relegated to lane based ranges, sometimes indoors only.  Shooters get to experience engaging targets within a 180 degree arc, shooting on the move, and engaging a target from under a car while laying on their side.  A vast array of positions that one just can’t experience in a box in a lane at the range.  Additionally you add in the adrenaline fueled by the competition and heavier breathing from movement and we can get close to real life physical conditions experienced in defensive engagements.  The only way I have been able to experience what it must truly be like to be in a defensive situation is to go to a shoot house event and have live targets shooting back, with simmunitions of course.  But that options are few and far between.

After a few months of focusing on defensive tactics during the local matches, I tried my hand at sanctioned matches.  It is true that we have to lose some of the true tactics, like slicing the pie, in order to be effectively competitive.  We have to find the best shooting position in the pre-stage walkthrough and hit those positions effectively to be fast.  That means techniques like slicing the pie are removed from the mindset.  It’s about getting to the corner, maintain cover and engage the “known” threat.

Both disciplines have elements that penalize inaccurate hits.  It is a balancing act of being fast but accurate.  I feel that this is a good way for us to constantly grow as a shooter, test our limits and do it in a safe manner.  In a real world scenario, we have to be fast but not so fast that we can’t make those effective hits that will ultimately stop or eliminate the threats.  Taking the time to focus on pushing our individual boundary between being accurate and fast during competitions allows us to test our limits.  Knowing these limits will allow us to better employ or skills during an actual event in an effective manner.

This past year was a huge learning curve for me.  I found that while I thought I knew a fair amount about the use of firearms, I had a vast amount I still needed to learn from a tactical perspective.  I also learned that while traditional range time was good to focus on various fundamentals and accuracy, there is always room for improvement a 360 degree world.  Competitive shooting helps us to fill that void between the range and the real world.  It may only be at a maximum of 180 degrees, but the skills we reinforce there will help us to be better prepared for a situation we all hope we will never have to experience.

The real world is not a range bay.  Even during competition, we have to keep it in our minds that threats can come from any direction.  In addition, we have to be ever mindful that we are governed by laws (rules).  We have to live within those laws and act accordingly when the need arises.  It is for this reason that I compete in the disciplines that I do.  They allow me to practice the fundamentals, constantly push my limits, and employ my skills under a given set of rules in a safe manner.  Like the vast majority of us, I hope I never have to use the skills that I have acquired and continuously hone.  But I hope that if that day comes, I will be able to react effectively and within the laws of the jurisdiction I am in.  To that end, I will continue to hone my skills through competition and ongoing training.  But in the end we have to acknowledge that the competitions are fun and a great chance to meet a great pool of fellow like-minded individuals.

BIO – Ryan Blankenship: I am a veteran of the U.S. Army and Desert Storm. Serving as both a Combat Engineer (12B) and a Satellite Network Technician (29Y-Q7). In my civilian life I have advanced my non-shooting profession as a Network Engineer. Most recently I have started competing in IDPA and USPSA competitions at an amateur level. But first and foremost I am a proud father of 2 young men. One of which has continued the family tradition of service and is currently enlisted in the Marine Corp.