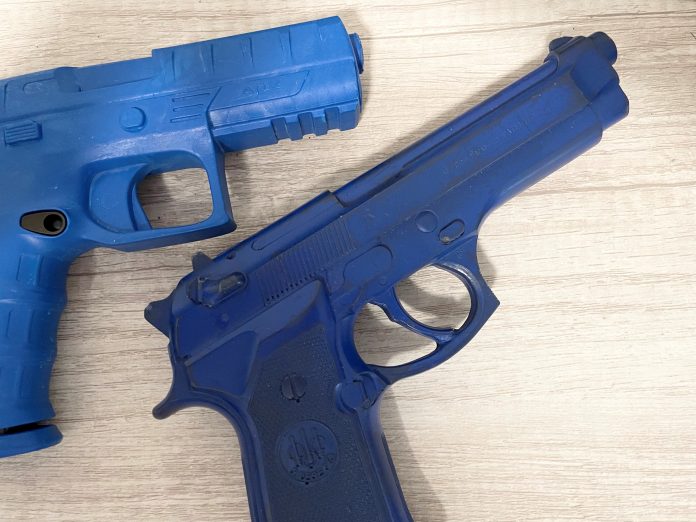 Someone once said “if you want to be a firearms instructor and you don’t own a blue gun, you’re pretending.” With a tragic firearm related accident making headlines, we as a community of shooters, students, and instructors can take an opportunity to reflect on why it’s important to have inert training devices.

What are blue guns?

“Blue gun” has become an industry phrase that represents almost any inert, solid plastic or polymer “gun” that holds the exact shape and dimensions of its live counterpart. The original blue gun was in fact blue, and is still produced today. Ring’s Blue Guns are the OG of these inert trainers, with the widest array of models available. However, other solid inert trainers are available from companies like ASP (the baton company), and Cold Steel. The primary purpose for all of these inert training objects is to allow students and instructors to perform actions that would be wildly unsafe in a training environment with an item that feels like their duty or carry gun. They can also double as holster molds for amateur kydex benders, but that’s a secondary feature.

When would we use a blue gun?

As mentioned above, the primary role for these gun-shaped training tools is training. For example, in a class where the instructor is demonstrating support hand placement during a concealed draw from appendix carry, it’s easiest for students to see if the instructor is facing them. However, we can all agree that it’s not safe to draw a real gun in that situation, which is where these inert trainers come into play. As an instructor, I can safely present a blue gun in a classroom environment as if I’m simulating a street encounter, and not worry about pointing a real gun at people.

Another environment where blue guns are especially useful is force on force training, such as ECQC by Craig Douglas. In these training environments we’re dealing with the complex problem of a close-in fight involving guns, grappling, and contact weapons. It would be IMPOSSIBLE to safely train without the use of inert training guns. But when those training items are used the training environment becomes as realistic as we can safely make it.

My personal favorite blue gun environment is for very new shooters who are uncomfortable with “real” guns. Introducing them to fundamentals with an inert trainer often removes some of the jitters that come with a live gun.

Do’s and don’ts of blue guns

Blue guns and other inert training tools are fantastic ways to conduct important training. But it’s also just as import to make sure that even when we’re using inert trainers that we’re following good safety protocols. When used correctly in the right context, an inert training gun can add tremendous value to a class, or to your personal training time.