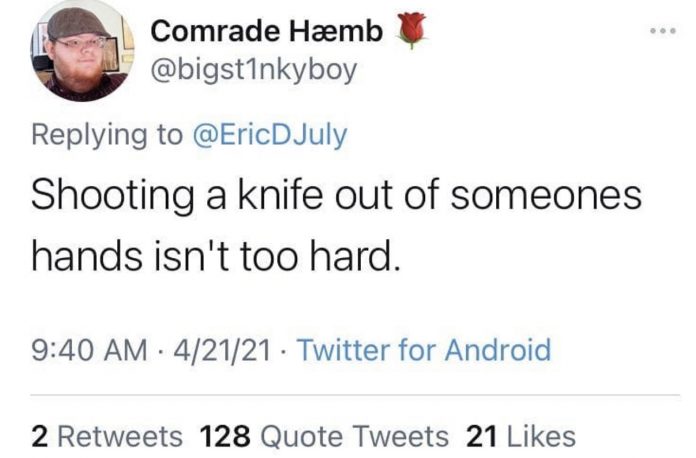 In the wake of the Ma’Khia Bryant shooting by Columbus Police, there has been an astronomical amount of grade-A idiocy spewing forth from so many (except the experts) on all the things that ‘could have been done’ in the scant seconds a responding officer had to evaluate the domestic event they were responding to.

In those seconds, Bryant’s last words were spoken, shouted rather, so loudly that cameras across the street (as well as on the officers) picked them up clearly, “I’m gonna stab the fuck out of you, bitch!”

The incident lasted 11 seconds, from when the officer got out of his patrol car until Bryant had charged another young woman to stab her. The officer fired, saving the girl in pink from sprouting the red, potentially spurting, holes Bryant was attempting to make in her.

Bryant made her final declaration about 4 seconds after that officer had gotten out of his car. It’s fairly evident he’s trying to figure out who is doing what in those few seconds. One of the involved people onsite is seen trying to restrain Bryant, they likely saw her start charging with the knife, causing Bryant and them to fall. Bryant gets away from the restraining individual, gets back up past the officer who is seen trying to start managing the whole near crowd, and moves to stab the girl wearing pink… The officer draws, fires, and Bryant drops before she can carry through on her final declaration.

It was a brutal, close, fast, and violent incident.

And then you have this…

Why go to the gun?

Simple, it is the safest option in that situation.

Especially for the girl in pink, who the officer saved, it was the safest option to minimize her risk of death or injury from Bryant. Anyone arguing for another option must admit that allowing the girl in pink to be maimed or killed by Bryant, or at the very least drastically increasing her chances of being maimed or killed, is part of what your are arguing for. You must accept that allowing that girl to be stabbed is part of what you are demanding. You are arguing that officers, victims, and bystanders must increase their risk of death or injury in order to safeguard the hostile person or persons to a greater level.

This is some seriously next level victim blaming, that because the person who was attempting to do the killing/maiming was killed they are now the victim while the person who was being assaulted and the officer who saved her are now at some combination of “at fault” because… ?

Ma’Khia Bryant was the individual who’s safety mattered the least in those 11 seconds. The girl in pink she was attempting to filet, the other individuals around the vehicle, and the officer who did not have any active support from other officers at the moment, were all higher priorities to keep safe than Bryant. The best option was the option the officer used. It was the only option that was likely to prevent the girl in pink from sprouting new bloody holes. Bryant was already moving, already stabbing, and already in physical contact with the other girl pinning her to the car.

Using a less effective option would have been willfully negligent to the immediate threat to the girl in pink, not simply the officer. Tackling or trying to physically restrain Bryant, who had already broken away from someone who tried that, would bring that person into stabbing range and make them an immediate likely target for stabbing too. Without overwhelming available restraint, which the responding officer wouldn’t have begun to be able to use for another several seconds (and thus several stabs to the girl in pink, or himself) it would have been negligent of him to try and grab Bryant… or tase Bryant, or pepper spray Bryant, or verbally command Bryant to stop and drop the knife. Those actions only work if there is a reactionary gap to safely do something if Bryant doesn’t comply or involuntarily comes under control, there was no such time available.

It is unreasonable to demand the officer risk injury or death, especially to victims and bystanders, when a more effective option exists. Risks taken to safeguard the individual who is the threat of injury are not the priority. If the person who tried to restrain Bryant, at great personal risk themselves, had attempted to again or any of the others had attempted to, then the situation would have been different.

But that didn’t happen, none of the things that could have changed the reactionary options happened. Bryant was unopposed in her assault against the girl in pink and the officer acted in the safest and most effective manner for that girl, himself, and the bystanders. Bryant voluntarily removed herself from considerations for her safety.

Without getting into how monumentally improbable that act is to succeed in even an ideal knife or melee weapon scenario (one where there is some time and space to try it), just look at the angle from the body camera.

If the officer shot the knife, or the hand, or the arm holding the knife and missed (highly likely given accuracy against a small erratically moving target) or the bullet passed through the arm or hand, the officer would be shooting the girl he was trying to stop from being stabbed. The likelihood of hitting the girl being stabbed would go up further as the knife and the arm holding it are rapidly moving toward the girl being stabbed. Bryant is trying to stab her, shooting at the thing that is moving towards and is already dangerously close to the person you are trying to save is a terrible idea. Shooting another arm or leg are almost equally terrible ideas.

The only thing that was likely to work, and there was no guarantee on that even in the last second available before pink girl became pink and bright red girl, was what happened. Bryant was killed while trying to kill or cause great bodily injury to the girl in pink. Her age doesn’t change that, nor does her gender, nor does her ethnicity, nor does the ethnicity of the officer.

But… I suppose an officer could stop and ask, “Excuse me ma’am, are you legally an adult of 18+ years or is this one of those teenage knife fights that we should ignore? Oh, you’re 16? Carry on then.” That seems like it would have ended poorly for the girl in pink, like all the other proposed alternatives.

I’ve written about this when “police reform” topics come up quite often, and I agree on many points that policing does need reform, but many proposed ‘improvements’ in policing brought forward would require officers to accept a potentially life changing or life ending injury to themselves or somebody else before they use force to intervene. The proposal is to require that the injury or death trying to be prevented occur before stopping it…

Multiple proposals amount to that sole conclusion, officers must accept physical injuries to themselves or somebody else before responding with injurious force. Not the potential for injuries (such as a suspect being armed and moving a weapon into position to cause harm) but to actually injure or kill someone, usually the involved officer, and then continue to do so before the officer responds.

In what other profession is that an acceptable injury standard? In what other profession must a debilitating injury be sustained before an effective countermeasure can be used? We don’t demand that level of risk imbalance from our combat troops, why for ourselves at home? Why for our police officers? Imagine demanding a construction crew to not move out of the way of a falling object. That somebody had to be hit by, and hurt or killed by, the falling object before anyone was allowed to move. That is the absolutely asinine level of injury sustainment we are talking about, because the injurer is acting deliberately and will likely also be injured in the response when it comes to use-of-force.

With the current climate surrounding police policy reform the way it is, I understand why this event jumped to the spotlight… I just am astonished by the mental gymnastics involved by the non-expert international discussion participants who insist Bryant didn’t need to be shot…

I argue that from the reasonable perspective of the girl in pink, that was the safest thing that could happen.